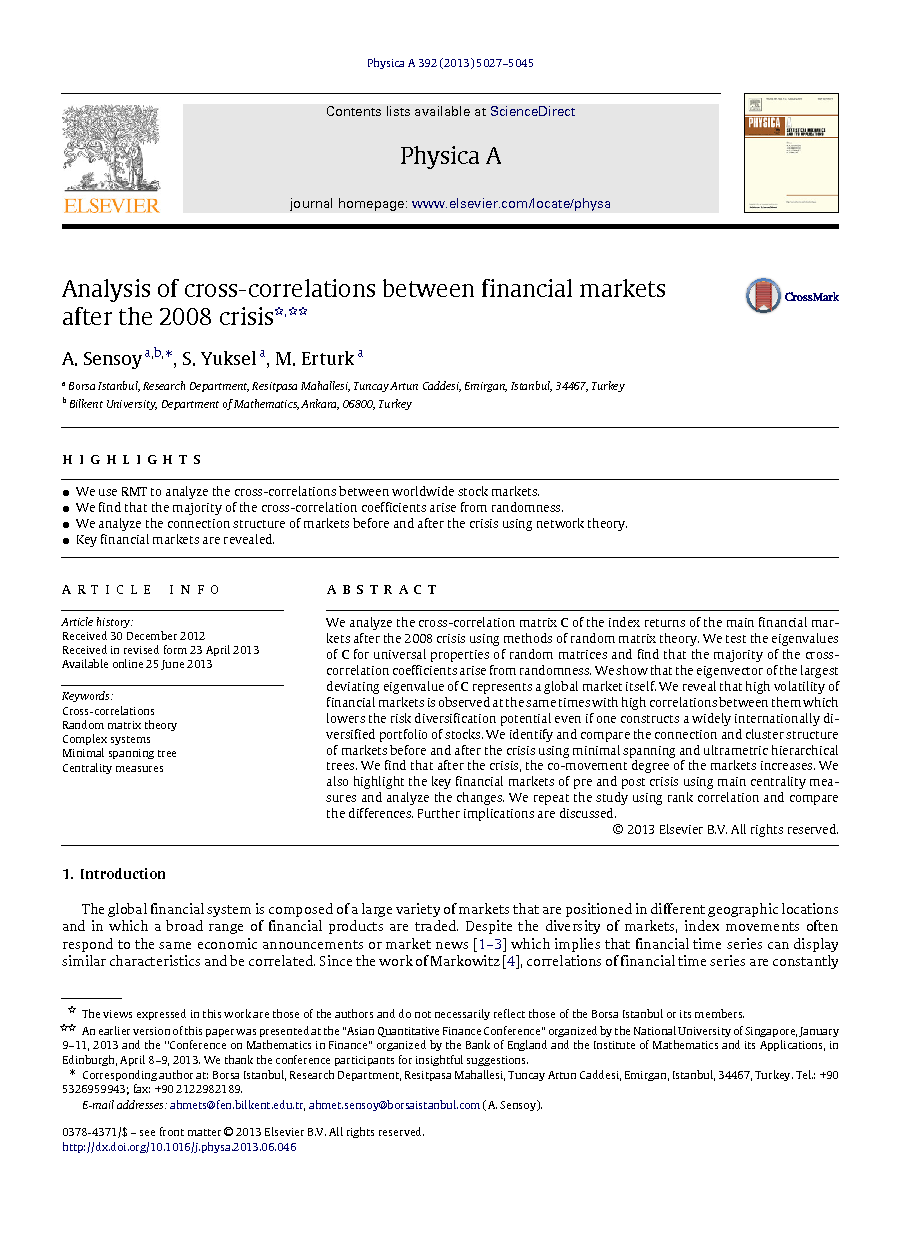 We analyze the cross-correlation matrix C of the index returns of the main financial markets after the 2008 crisis using methods of random matrix theory. We test the eigenvalues of C for universal properties of random matrices and find that the majority of the cross-correlation coefficients arise from randomness. We show that the eigenvector of the largest deviating eigenvalue of C represents a global market itself. We reveal that high volatility of financial markets is observed at the same times with high correlations between them which lowers the risk diversification potential even if one constructs a widely internationally diversified portfolio of stocks. We identify and compare the connection and cluster structure of markets before and after the crisis using minimal spanning and ultrametric hierarchical trees. We find that after the crisis, the co-movement degree of the markets increases. We also highlight the key financial markets of pre and post crisis using main centrality measures and analyze the changes. We repeat the study using rank correlation and compare the differences. Further implications are discussed.

The global financial system is composed of a large variety of markets that are positioned in different geographic locations and in which a broad range of financial products are traded. Despite the diversity of markets, index movements often respond to the same economic announcements or market news [1], [2] and [3] which implies that financial time series can display similar characteristics and be correlated. Since the work of Markowitz [4], correlations of financial time series are constantly a subject of extensive studies both at the theoretical and practical levels. It is important not only for understanding the collective behavior of a complex system but also for asset allocation and estimating the risk of a portfolio. In particular since the recent 2008 financial crisis, which originated in the US and then spread to almost all markets in the world, many economists have been studying the correlation structure between financial markets and the transmission of volatility from one to another. One of the major difficulties in these studies are the complicated unknown underlying interactions of the financial markets. Besides correlations between markets need not be just pairwise but may rather involve clusters of markets and relationship between any two pair may change in time [5]. In earlier times, physicists experienced similar problems. The problem became popular by Wigner’s work in the 1950s for application in nuclear physics, in the study of statistical behavior of neutron resonances and other complex systems of interactions [6]. He tried to understand the energy levels of complex nuclei, when model calculations failed to explain experimental data. To overcome this problem, he assumed that the interactions between the constituents comprising the nucleus are so complex that they can be modeled as random [5]. Based on this assumption, he derived the statistical properties of very large symmetric matrices with i.i.d. entries and the results were in remarkable agreement with experimental data. More recently random matrix theory (RMT) has been applied to analyze the financial time series [5], [7], [8], [9], [10], [11], [12], [13], [14], [15], [16], [17], [18], [19], [20], [21], [22], [23], [24], [25], [26], [27], [28], [29], [30], [31], [32], [33], [34], [35], [36] and [37]. In particular, correlation matrices are computed for the empirical data and quantities associated with these matrices are compared to those of random matrices. The extent to which properties of the correlation matrices deviate from random matrix predications clarifies the status of the information derived from the computation of covariances [12]. The literature focuses on the correlations between individual stocks in a market; however, in this study we will analyze the cross-correlations between 87 main financial markets in the world by tools of RMT. The rest of the paper is organized as follows; in Section 2, we give a brief description of the methodology. Section 3 describes the data and contains several results of our analysis; in particular Sections 3.1, 3.2 and 3.4 present the eigenvalue and eigenvector analysis of the correlation matrix with discussion of the relation between volatility and correlation of financial markets. In Section 3.6, we construct a correlation based market network and compare the structure before and after the 2008 financial crisis by tools of graph theory. In Section 4, we use an alternative approach to the construction of the correlation matrix, present the related results and discuss possible further studies. Finally, Section 5 contains some concluding remarks.

The global financial crisis of 2008 began in July 2007 when a loss of confidence by investors in the value of securitized mortgages in the US resulted in a liquidity crisis. In September 2008, the crisis deepened as stock markets worldwide crashed and entered a period of high volatility. This study compares before and after the 2008 crisis by analyzing the cross-correlations of financial markets using the tools of RMT and network theory. In particular, we verified the validity of the universal predictions of RMT for the statistics of the eigenvalues and the corresponding eigenvectors of the cross-correlation matrix. Then the cross-correlations between markets not totally explainable by randomness were identified by computing the deviations of the empirical data from the RMT predictions. We showed the presence of a certain linear combination of indexes representing a global market itself that arises from interactions. By using this particular combination, we observed that markets become highly correlated in times of high volatility (also the time-varying largest deviating eigenvalue peaks during the highest volatility); moreover when the volatility passes to its low levels, the increased degree of co-movement continues for a considerable amount of time. We also find that markets are more correlated after 2008 compared to the period of 2005–2007. These facts lower the diversification potential even if one constructs a widely internationally diversified portfolio of stocks. We found the connection structure of financial markets for pre and post 2008 crisis using correlation based networks. We show that in an environment of increasing integration of trade and financial markets, geographical position and historical and linguistic ties still play an important role in co-movements of stock markets. Analysis also shows that eurozone debt crisis forces the stock markets of problematic countries to move together, revealing an interesting fact on how bond and stock markets of a country interact. We identified key financial markets using several centrality measures. Analysis shows that centers like France, Germany and Hong Kong keep their importance in the financial system after the 2008 crisis. However, the same cannot be said for the UK. To extract the information arising from non-linear relations between markets, we repeated each analysis using a rank correlation and found that the results are almost indistinguishable. Possible extensions for further research includes applications of the long-range cross-correlations and time lag-RMT to our data.