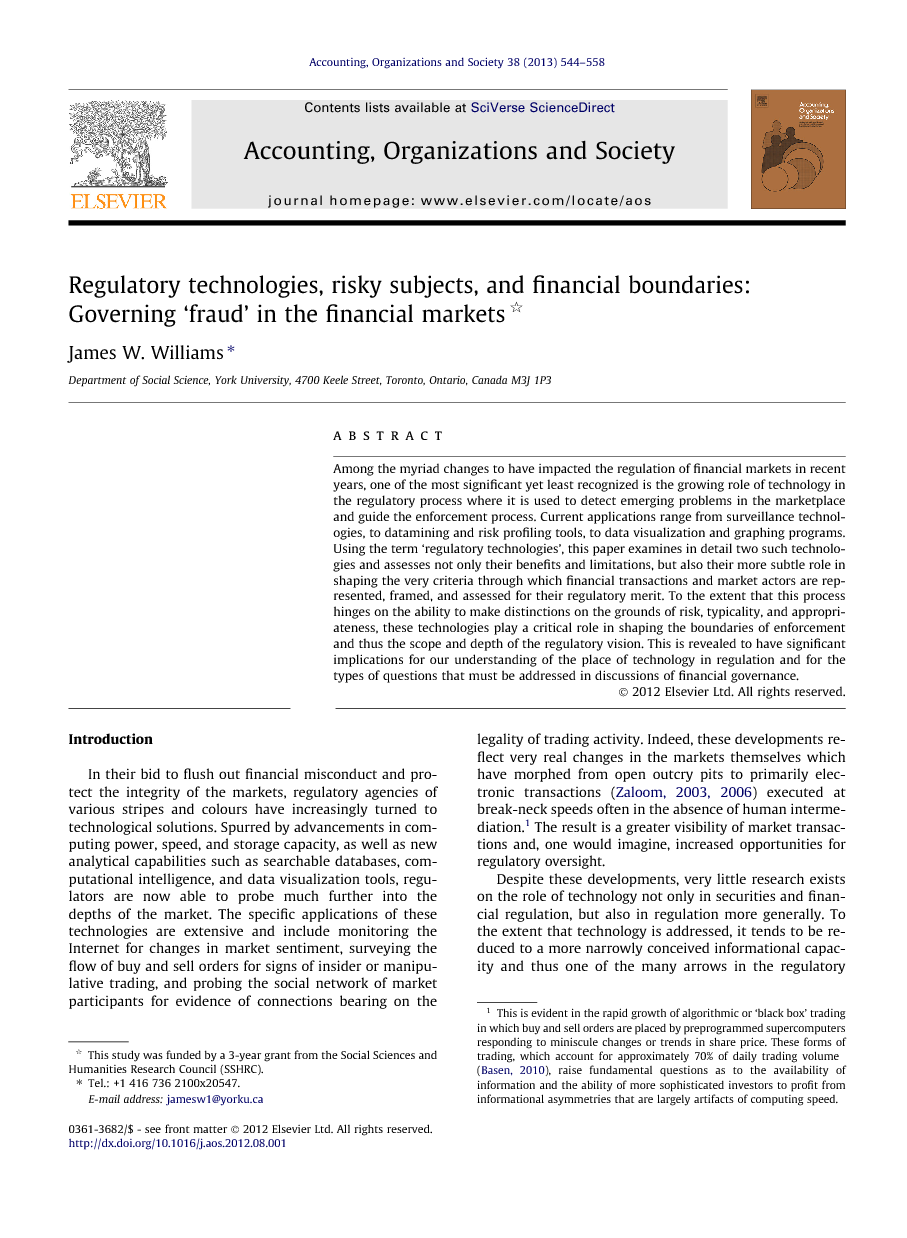 Among the myriad changes to have impacted the regulation of financial markets in recent years, one of the most significant yet least recognized is the growing role of technology in the regulatory process where it is used to detect emerging problems in the marketplace and guide the enforcement process. Current applications range from surveillance technologies, to datamining and risk profiling tools, to data visualization and graphing programs. Using the term ‘regulatory technologies’, this paper examines in detail two such technologies and assesses not only their benefits and limitations, but also their more subtle role in shaping the very criteria through which financial transactions and market actors are represented, framed, and assessed for their regulatory merit. To the extent that this process hinges on the ability to make distinctions on the grounds of risk, typicality, and appropriateness, these technologies play a critical role in shaping the boundaries of enforcement and thus the scope and depth of the regulatory vision. This is revealed to have significant implications for our understanding of the place of technology in regulation and for the types of questions that must be addressed in discussions of financial governance.

In their bid to flush out financial misconduct and protect the integrity of the markets, regulatory agencies of various stripes and colours have increasingly turned to technological solutions. Spurred by advancements in computing power, speed, and storage capacity, as well as new analytical capabilities such as searchable databases, computational intelligence, and data visualization tools, regulators are now able to probe much further into the depths of the market. The specific applications of these technologies are extensive and include monitoring the Internet for changes in market sentiment, surveying the flow of buy and sell orders for signs of insider or manipulative trading, and probing the social network of market participants for evidence of connections bearing on the legality of trading activity. Indeed, these developments reflect very real changes in the markets themselves which have morphed from open outcry pits to primarily electronic transactions (Zaloom, 2003 and Zaloom, 2006) executed at break-neck speeds often in the absence of human intermediation.1 The result is a greater visibility of market transactions and, one would imagine, increased opportunities for regulatory oversight. Despite these developments, very little research exists on the role of technology not only in securities and financial regulation, but also in regulation more generally. To the extent that technology is addressed, it tends to be reduced to a more narrowly conceived informational capacity and thus one of the many arrows in the regulatory quiver, rather than an aspect of regulation that is deserving of study in its own right. Informed by the results of a multi-year study of securities regulation in Canada, this paper seeks to remedy this oversight through an extended analysis of ‘regulatory technologies’ and their place within, and their influence on, the practice of regulation. Eschewing the view of technology as a mere vehicle for recording and organizing data of regulatory interest, with technology conceived here simply as an extension of its human operators, attention is instead devoted to the regulatory possibilities contained in the technologies themselves; that is, to their role as active agents proactively scanning available market data for signs of trouble and then feeding the results to their human counterparts. In recognizing this more active role of technology in the regulatory process, this paper draws from two key literatures – ‘critical accounting’2 and the ‘social studies of finance’ – which acknowledge the social and institutional contexts of accounting and finance as well as the role of calculative technologies and devices not only in representing market activities or financial transactions, but also in shaping and indeed constituting these very practices. Working within these analytical veins, the focus of this paper extends well beyond the promises or failures of regulatory technologies to include their underlying logics and assumptions, their embeddedness within specific institutional contexts and legal processes, and the types of market ‘misconduct’ that they produce. Ultimately then, the question is how technology shapes the field, scope, and logics of regulatory engagement producing particular forms of disorder to the exclusion of others all the while constituting ‘finance’ and ‘the market’ itself in the process. This analysis unfolds through three core sections. The first section offers a more fulsome account of exactly what is meant by the term ‘regulatory technologies,’ its relevance to the contemporary context of financial markets and securities regulation, and the various influences which have driven the ever greater importation of techno-logics into the regulatory process. It then examines in detail two specific regulatory technologies that have assumed a prominent role in the daily practice of securities enforcement3: (1) real-time market surveillance and (2) datamining and risk profiling. Having identified their assumptions, tendencies, and practical limitations, the second section turns to the unintended consequences and less obvious side-effects of these technologies including their role in signaling rather than necessarily enhancing agency competencies and, even more critically, reproducing more narrowly cast and at the same time heavily moralized conceptions of trouble, risk, and disorder. The paper then concludes with a discussion of the implications of the analysis for future research including the need to extend the conversation around regulatory technologies to other areas of financial regulation such as auditing whose technological attributes are similarly overlooked and underappreciated.