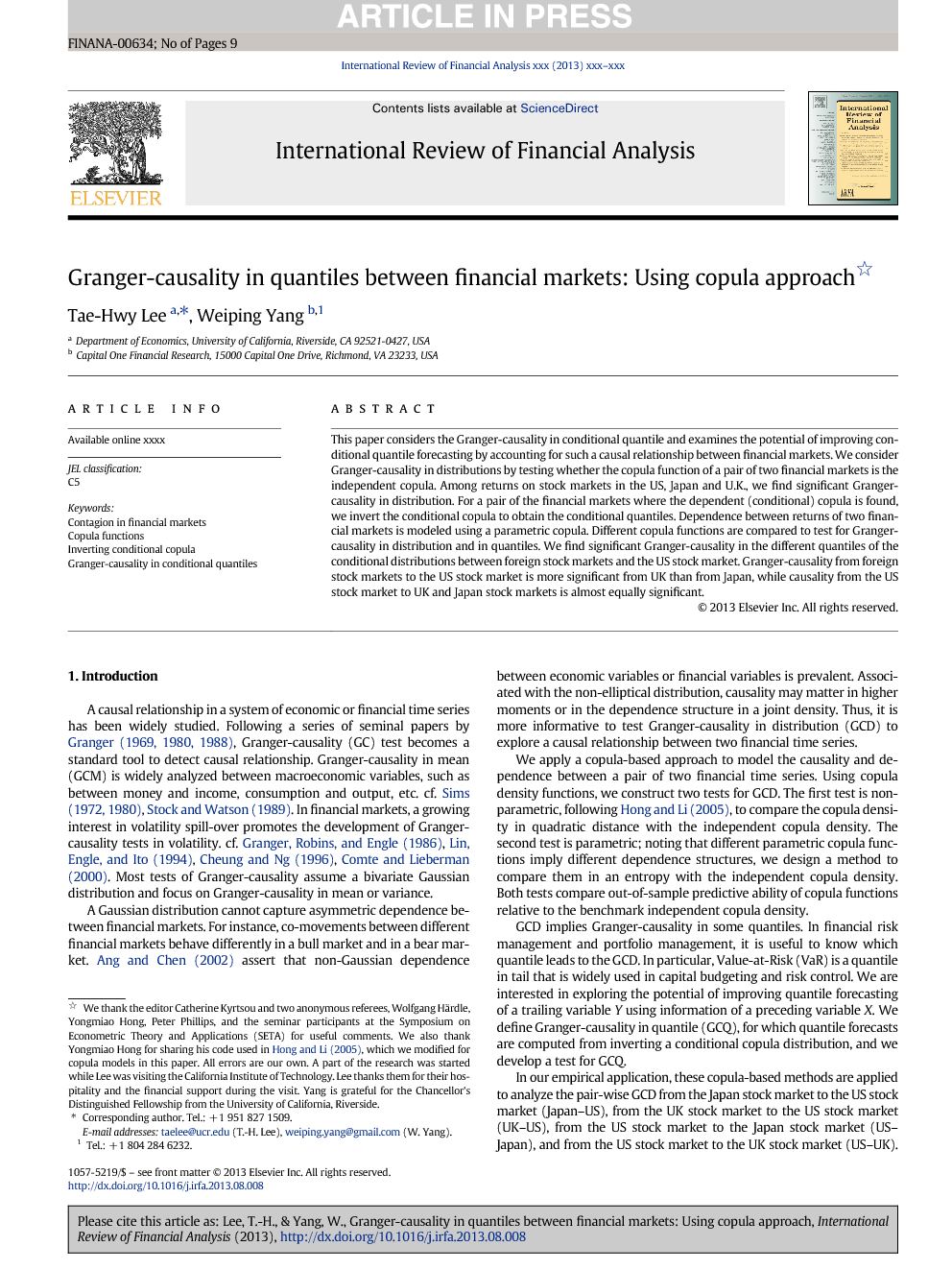 A causal relationship in a system of economic or financial time series has been widely studied. Following a series of seminal papers by Granger, 1969, Granger, 1980 and Granger, 1988, Granger-causality (GC) test becomes a standard tool to detect causal relationship. Granger-causality in mean (GCM) is widely analyzed between macroeconomic variables, such as between money and income, consumption and output, etc. cf. Sims, 1972 and Sims, 1980, Stock and Watson (1989). In financial markets, a growing interest in volatility spill-over promotes the development of Granger-causality tests in volatility. cf. Granger, Robins, and Engle (1986), Lin, Engle, and Ito (1994), Cheung and Ng (1996), Comte and Lieberman (2000). Most tests of Granger-causality assume a bivariate Gaussian distribution and focus on Granger-causality in mean or variance. A Gaussian distribution cannot capture asymmetric dependence between financial markets. For instance, co-movements between different financial markets behave differently in a bull market and in a bear market. Ang and Chen (2002) assert that non-Gaussian dependence between economic variables or financial variables is prevalent. Associated with the non-elliptical distribution, causality may matter in higher moments or in the dependence structure in a joint density. Thus, it is more informative to test Granger-causality in distribution (GCD) to explore a causal relationship between two financial time series. We apply a copula-based approach to model the causality and dependence between a pair of two financial time series. Using copula density functions, we construct two tests for GCD. The first test is nonparametric, following Hong and Li (2005), to compare the copula density in quadratic distance with the independent copula density. The second test is parametric; noting that different parametric copula functions imply different dependence structures, we design a method to compare them in an entropy with the independent copula density. Both tests compare out-of-sample predictive ability of copula functions relative to the benchmark independent copula density. GCD implies Granger-causality in some quantiles. In financial risk management and portfolio management, it is useful to know which quantile leads to the GCD. In particular, Value-at-Risk (VaR) is a quantile in tail that is widely used in capital budgeting and risk control. We are interested in exploring the potential of improving quantile forecasting of a trailing variable Y using information of a preceding variable X. We define Granger-causality in quantile (GCQ), for which quantile forecasts are computed from inverting a conditional copula distribution, and we develop a test for GCQ. In our empirical application, these copula-based methods are applied to analyze the pair-wise GCD from the Japan stock market to the US stock market (Japan–US), from the UK stock market to the US stock market (UK–US), from the US stock market to the Japan stock market (US–Japan), and from the US stock market to the UK stock market (US–UK). We find significant GCD in these four data sets and all sample periods considered (seven different subsample periods), as the benchmark independent copula is clearly rejected in all data sets and subsamples. For GCQ, we compare predictive performance of various copula functions with the benchmark independent copula function over different quantiles of the conditional distribution of one market conditional on another market. It is found that GCQ is significant from US to foreign stock markets and from UK to the US stock market, but not from Japan to US. The result is robust over the seven subsamples. The rest of the paper is organized as follows. Section 2 introduces two tests of GCD based on copula density functions. Both tests are based on the distance measures and thus measure the strength of GCD. Section 3 defines GCQ and develops a method to test for GCQ. Section 4 reports empirical findings on GCD and GCQ. Section 5 concludes. Appendix A reviews some basic results on copula functions.