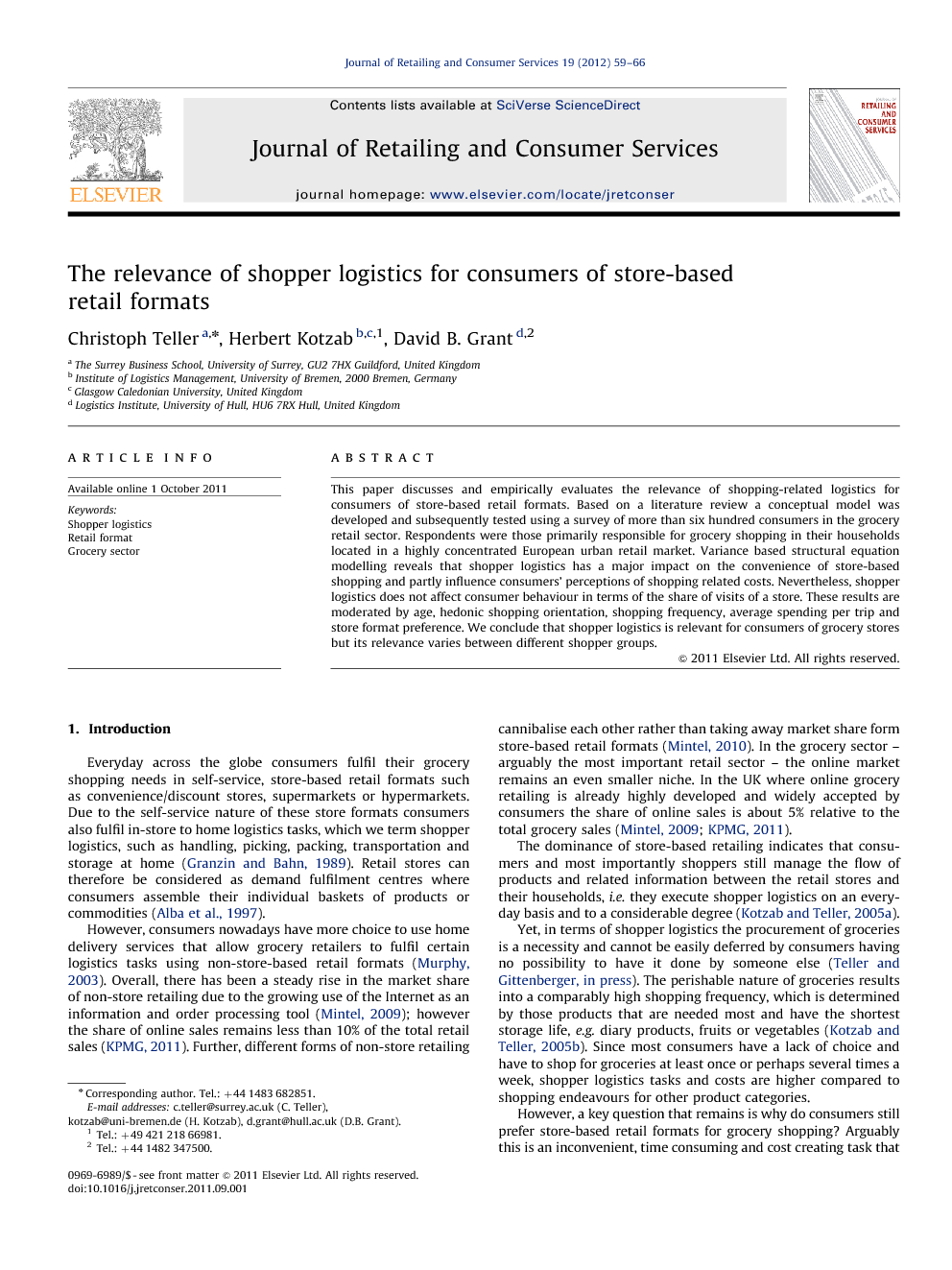 This paper discusses and empirically evaluates the relevance of shopping-related logistics for consumers of store-based retail formats. Based on a literature review a conceptual model was developed and subsequently tested using a survey of more than six hundred consumers in the grocery retail sector. Respondents were those primarily responsible for grocery shopping in their households located in a highly concentrated European urban retail market. Variance based structural equation modelling reveals that shopper logistics has a major impact on the convenience of store-based shopping and partly influence consumers' perceptions of shopping related costs. Nevertheless, shopper logistics does not affect consumer behaviour in terms of the share of visits of a store. These results are moderated by age, hedonic shopping orientation, shopping frequency, average spending per trip and store format preference. We conclude that shopper logistics is relevant for consumers of grocery stores but its relevance varies between different shopper groups.

Everyday across the globe consumers fulfil their grocery shopping needs in self-service, store-based retail formats such as convenience/discount stores, supermarkets or hypermarkets. Due to the self-service nature of these store formats consumers also fulfil in-store to home logistics tasks, which we term shopper logistics, such as handling, picking, packing, transportation and storage at home (Granzin and Bahn, 1989). Retail stores can therefore be considered as demand fulfilment centres where consumers assemble their individual baskets of products or commodities (Alba et al., 1997). However, consumers nowadays have more choice to use home delivery services that allow grocery retailers to fulfil certain logistics tasks using non-store-based retail formats (Murphy, 2003). Overall, there has been a steady rise in the market share of non-store retailing due to the growing use of the Internet as an information and order processing tool (Mintel, 2009); however the share of online sales remains less than 10% of the total retail sales (KPMG, 2011). Further, different forms of non-store retailing cannibalise each other rather than taking away market share form store-based retail formats (Mintel, 2010). In the grocery sector – arguably the most important retail sector – the online market remains an even smaller niche. In the UK where online grocery retailing is already highly developed and widely accepted by consumers the share of online sales is about 5% relative to the total grocery sales (Mintel, 2009 and KPMG, 2011). The dominance of store-based retailing indicates that consumers and most importantly shoppers still manage the flow of products and related information between the retail stores and their households, i.e. they execute shopper logistics on an everyday basis and to a considerable degree (Kotzab and Teller, 2005a). Yet, in terms of shopper logistics the procurement of groceries is a necessity and cannot be easily deferred by consumers having no possibility to have it done by someone else (Teller and Gittenberger, in press). The perishable nature of groceries results into a comparably high shopping frequency, which is determined by those products that are needed most and have the shortest storage life, e.g. diary products, fruits or vegetables (Kotzab and Teller, 2005b). Since most consumers have a lack of choice and have to shop for groceries at least once or perhaps several times a week, shopper logistics tasks and costs are higher compared to shopping endeavours for other product categories. However, a key question that remains is why do consumers still prefer store-based retail formats for grocery shopping? Arguably this is an inconvenient, time consuming and cost creating task that is repeated frequently (Ingene, 1984). So far, the literature has dealt with the phenomenon of logistics-related tasks being carried out by consumers when they shop for groceries in a descriptive way. However, it has failed to investigate consumers' perceptions about the logistics process and consequently its relevance regarding patronage behaviour of store-based formats. This paper's aim is to discuss and evaluate the relevance of shopping-related logistics tasks or shopper logistics to consumers of store-based retail formats in the grocery sector. The major contribution of this paper for retail and service research is to provide further insights into the perceived role of consumers as unwillingly and/or unconscious active members in the food supply chain. Thus, this paper contributes to a better understanding of the co-production of distribution services in store-based grocery retailing. This paper is organised as follows: after these introductory remarks we present a literature review that provides a synopsis of the dormant discussion on shopper logistics. Based on that, five hypotheses are developed within a conceptual model, then, the methodological characteristics for empirically testing this model and the results from this research are presented. In the discussion section the findings are reflected upon with respect to the existing literature. A research limitations and outlook section concludes the paper.

The findings clearly show the relevance of shopper logistics for the convenience of store-based shopping in the grocery sector confirming previous suppositions of Ingene (1984), Gert and Yan (2004) and Granzin et al. (2005). In particular, the store-related shopper logistics attributes linked to transportation, picking and packing activities of consumers can be considered as relevant for store-based shoppers. In other words, the convenience attached to a shopping experience can be an influencer to facilitate logistics endeavours by making the store easy to access, clearly laying out the stores, arranging products and displaying prices clearly, and making enough cash tills available when needed. This finding calls for making the shopping process simpler for consumers in terms of logistics activities (Baker et al., 2002). This is particularly true for consumers of a higher age and those who shop at grocery stores more often. We thus identify the relevance of shopper logistics in a grocery retail setting for elderly and frequent shoppers and thereby confirm work by Keillor et al. (1996), Meneely et al. (2009), Reutterer and Teller (2009) and Teller and Gittenberger (in press). Further, and in line with Ingene (1984), the other determinant of the convenience of store-based shopping is time. The perception of time in-store can be influenced by streamlining and optimising shopper logistics as suggested above and by influencing perceptions. That can be achieved for example by minimising obvious waiting times at counters or cash tills, which are perceived as non-value adding activities by shoppers (Bennett, 1998). Inline with Bell et al. (1998) and Ingene (1984), shopping time has an impact on the perceived cost of shopping. The impact is higher for those consumers who spend more per trip which ultimately indicates the size of shopping baskets. By confirming Granzin et al. (1997) we conclude that shopper logistics is more relevant for those consumers who are exposed to the logistics task more by picking, packing and moving more products per trip than others. However, we cannot confirm Ingene's (1984) notions in terms of the impact of store-related shopper logistics attributes on perceived cost of shopping. A major finding is that across all respondents the perception and evaluation of shopper logistics does not result in behavioural consequences measured by the share of visits, which confirms findings of Teller et al. (2006). Further, neither (in-)convenience nor the cost of store-based shopping can be seen as a major driving force for store patronage. Nevertheless, we see a moderating effect of the hedonic shopping orientation and the store format patronage behaviour. For more hedonic oriented shoppers convenience has a higher impact on the patronage behaviour than for less hedonic shoppers. This extends the findings of Babin et al. (1994) in terms of grocery retailing. They see convenience more important for utilitarian shoppers compared to hedonic ones. Further, the results of the group of hypermarket patrons indicate that store-related shopper logistics attributes have a significant total effect (γ31γ13+γ41γ14, .124; t-value, 1.955; p-value, .05) and convenience a significant direct effect (γ13, .209; t-value, 2; p-value, .05) on the share of visits. Thus, shopper logistics is of relevance for patrons of large retail formats like hypermarkets compared to supermarket and discount stores. We conclude that shopper logistics is relevant for consumers of store-based grocery retail formats; it particularly influences the convenience dimension of the shopping experience. The relevance of shopper logistics is influenced both by the ability and the willingness to carry out and extent of the shopper logistics task. This ultimately suggests that shopper logistics is perceived and evaluated and consequently impacts different consumer groups distinctively and thus is a relevant criterion to segment consumer markets as suggested by Granzin et al. (1997).