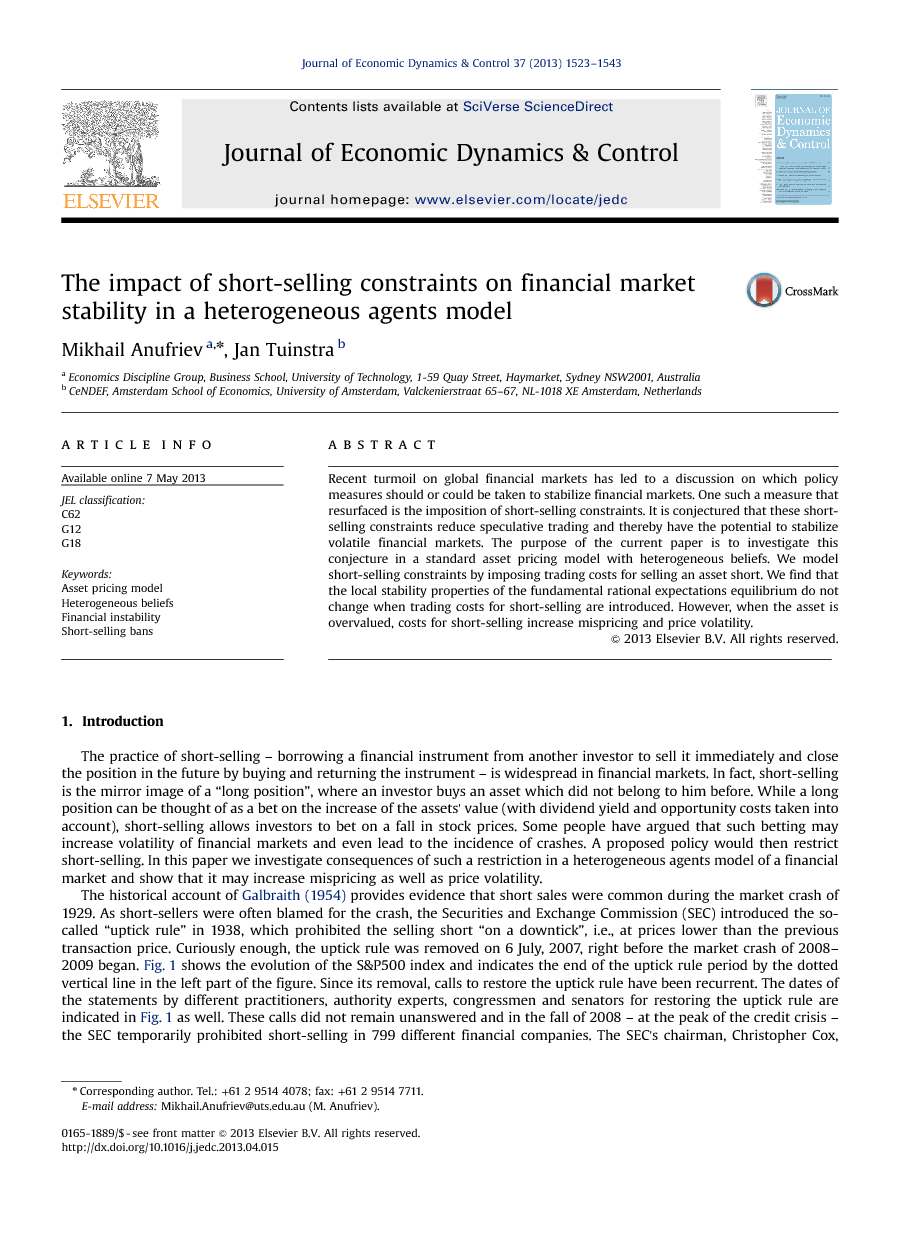 In this paper we have analyzed the quantitative consequences of imposing short-selling constraints for asset-pricing dynamics in a model with heterogeneous beliefs. Most of the existing literature points out that short-selling restrictions may lead to systematic overvaluation of the security. The intuition for that was provided by Miller, 1977 who shows, in a two-period setting, that a diversity of expectations among investors leads to overpricing. Our model formalizes this intuition and extends it to a dynamic setting. In our model the demand of myopic investors depends on their expectations of the future price. Expectations are heterogeneous and agents are allowed to switch between different forecasting rules over time. As is well known, the dynamical behavior of asset prices in such a model is qualitatively for higher values of the intensity of choice parameter ββ. For low values of this parameter prices converge to their fundamental steady state. For high values of the intensity of choice the model may exhibit price oscillations with excess volatility. We introduce short-selling constraints in this environment by imposing trading costs for selling the risky asset short. Since trading costs do not have to be paid at the fundamental steady state, where all traders hold a positive amount of the risky asset, existence and local stability of that steady state are unaffected by these costs. However, typically non-fundamental steady states also exist in this environment, and their existence and local stability depends crucially on trading costs. In particular, when there are trading costs for short-selling, these non-fundamental steady states emerge for a wider range of parameters of the underlying model, they may correspond to a much larger degree of mispricing – in particular when the asset is overvalued – and they lose stability for lower values of the intensity of choice parameter. Introducing trading costs for short-selling may therefore very well increase mispricing and price volatility, a feature which is quite robust and confirmed by our numerical simulations. To study the effect of short-selling constraints, we have deliberately chosen a model with heterogeneous expectations, capable of generating the patterns of bubbles and crashes that financial authorities aim to prevent or mitigate by restricting short-selling.13 Some features of this model may influence our findings. Consequently, in future research we would like to extend the model in several directions. First, the myopic agents of the model do not take the short-sell constraints into account while forming their expectations. While we believe that such an assumption is quite reasonable in the framework of boundedly rational agents, it would be also interesting to analyze the model with some fraction of rational agents, who do take the short-sell constraints into account. Alternatively, one might look at a larger set of belief types and investigate whether the introduction of trading costs changes the (steady state) distribution of the population of traders over these belief types. Second, the constraints which we analyzed are individual, while on the real markets there are many aggregate constraints. For example, the total amount of shares available for short sales is, in reality, limited. The effect of that type of constraint can be analyzed in a large scale agent-based version of the current model. Finally, the effect of short-selling constraints is closely related to the role of margin requirements. Indeed, in a real market selling a share short requires providing some collateral to the broker. If the price of an asset rises, the investor who is short should cover his nominal losses to an extent which depends on the margin requirement. It is not surprising that among the most important questions discussed in the literature on margin requirements is their role in market volatility and the prevention of bubbles. Two opposing points of views can be found in the literature. On the one hand, Seguin and Jarrell (1993) and Hsieh and Miller (1990) argue that margin requirements are empirically irrelevant for price behavior, whereas, e.g., Garbade (1982) and Hardouvelis and Theodossiou (2002) provide theoretical arguments why an increase in margin requirements is beneficial for market stability. Again, with an agent-based extension of the model presented here we plan to analyze the joint effect of short-selling constraints and margin requirements on financial market dynamics and price volatility.