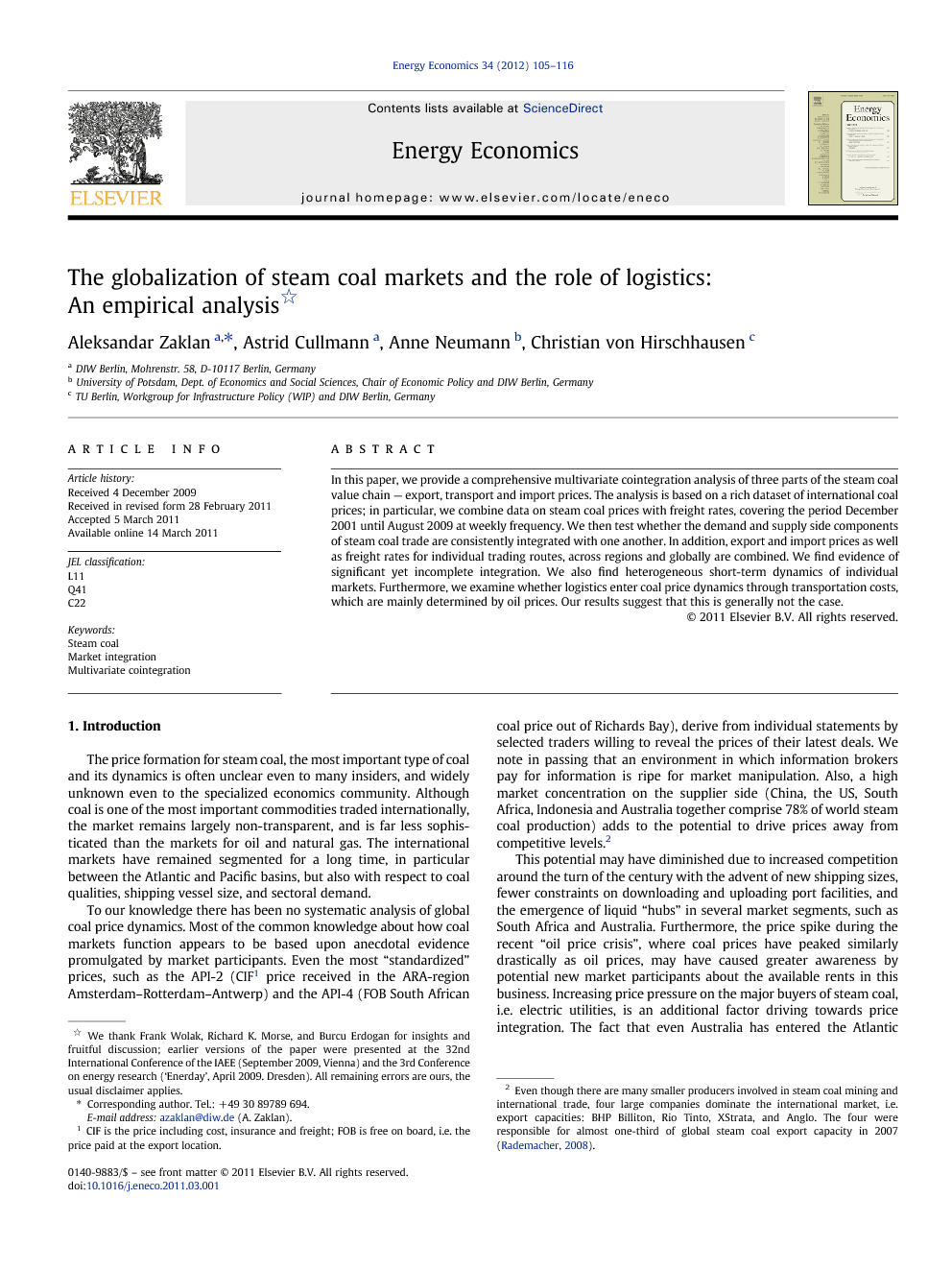 In this paper, we provide a comprehensive multivariate cointegration analysis of three parts of the steam coal value chain — export, transport and import prices. The analysis is based on a rich dataset of international coal prices; in particular, we combine data on steam coal prices with freight rates, covering the period December 2001 until August 2009 at weekly frequency. We then test whether the demand and supply side components of steam coal trade are consistently integrated with one another. In addition, export and import prices as well as freight rates for individual trading routes, across regions and globally are combined. We find evidence of significant yet incomplete integration. We also find heterogeneous short-term dynamics of individual markets. Furthermore, we examine whether logistics enter coal price dynamics through transportation costs, which are mainly determined by oil prices. Our results suggest that this is generally not the case.

In this paper we analyze the integration of the seaborne international steam coal trade using a richer dataset than the existing literature in terms of scope and frequency. Following a descriptive analysis we derive three testable hypotheses. Our first hypothesis is that international steam coal prices are directly related to each other, and our second hypothesis is that the prices of steam coal and freight rates for transportation are not integrated with the price of oil. This implies that logistics do not enter the pricing system for coal through the main driver of shipping costs, but in a more complex manner. Additionally, our third hypothesis is that global markets for steam coal are not yet completely integrated when taking into account systems of supply and demand. We use a detailed multivariate cointegration analysis of the system of demand and supply of steam coal consisting of CIF prices on the demand side and FOB prices and freight rates on the supply side. From our analysis of the various components of the demand and supply sides separately we can partially confirm the findings in the existing literature. We find that the majority of export prices are cointegrated, with the two notable exceptions of Colombian prices with any of the other export prices, and Chinese exports with exports from one Australian location, Gladstone. We also confirm results about the integration of import prices from the existing literature (Warell, 2006). We conclude that the price of (residual fuel) oil does not belong to the same system of either coal prices or freight rates, confirming our hypothesis that logistics affect the steam coal trade in more complex ways than simply through the price of oil. With FOB prices and freight rates aggregated, we test the integration of the demand and supply sides of the coal market for each route by basin and globally. This analysis is novel compared to the existing literature. We find significant integration of the international trade in steam coal, with the notable exception of the China to ARA route, and contradictive evidence for the New South Wales to Korea route. Once we expand our analysis to the regional and global levels we find significant cointegration of both the regional and global markets. Having addressed the existence of integration we analyze the setup of the long-term equilibrium and short-term dynamics for each route. We find similarity for both long-term structure and short-term dynamics among all integrated routes. However, we also find significant differences regarding the roles of prices and freight rates in the long-term relationship and the speed of adjustment. We conclude that while the coal market has achieved a significant amount of global integration, it still exhibits rigidities by route, with the system achieving equilibrium more rapidly on some routes than on others, both within and across basins. With respect to the overall development of the market, our results suggest that market participants should be prepared to deal with an increasingly global coal market, whereas previous thinking was dominated by regional approaches. Overall our results also suggest intensified competition in steam coal markets, leaving less room for the abuse of market dominance. However, the exceptions we find to the general trend also suggest that “pockets” of markets with different characteristics and behavior remain, so that regional market power remains an issue. The findings also suggest that local events, such as the recent flood in Australia leading to substantial upheaval in the production chain, may affect not only local or regional markets, but have repercussions on transportation routes around the world. We suggest that additional research should address spatial price competition, taking into account transportation limitations (e.g., Panama Canal) as well as differences in coal qualities. Furthermore, the use of steam coal mainly for electricity generation has direct repercussions for the prices of emissions allowances, at least in Europe. In addition, interfuel competition may be affected, so that adding the prices of additional fuels and emissions allowances to the analysis should extend our findings. Another fruitful avenue for further research is to analyze the precise role of logistics in the pricing of transportation costs.