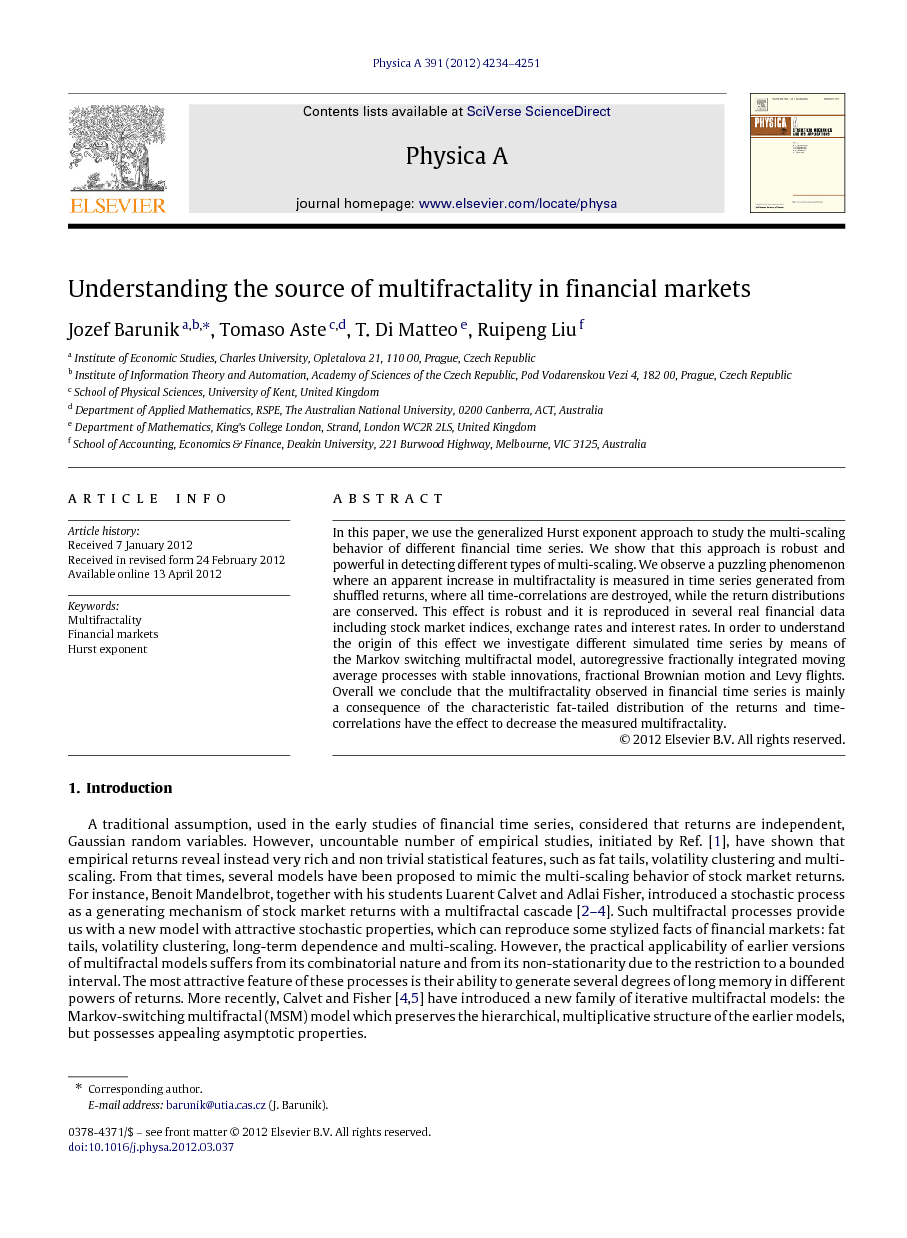 In this paper, we use the generalized Hurst exponent approach to study the multi-scaling behavior of different financial time series. We show that this approach is robust and powerful in detecting different types of multi-scaling. We observe a puzzling phenomenon where an apparent increase in multifractality is measured in time series generated from shuffled returns, where all time-correlations are destroyed, while the return distributions are conserved. This effect is robust and it is reproduced in several real financial data including stock market indices, exchange rates and interest rates. In order to understand the origin of this effect we investigate different simulated time series by means of the Markov switching multifractal model, autoregressive fractionally integrated moving average processes with stable innovations, fractional Brownian motion and Levy flights. Overall we conclude that the multifractality observed in financial time series is mainly a consequence of the characteristic fat-tailed distribution of the returns and time-correlations have the effect to decrease the measured multifractality.

A traditional assumption, used in the early studies of financial time series, considered that returns are independent, Gaussian random variables. However, uncountable number of empirical studies, initiated by Ref. [1], have shown that empirical returns reveal instead very rich and non trivial statistical features, such as fat tails, volatility clustering and multi-scaling. From that times, several models have been proposed to mimic the multi-scaling behavior of stock market returns. For instance, Benoit Mandelbrot, together with his students Luarent Calvet and Adlai Fisher, introduced a stochastic process as a generating mechanism of stock market returns with a multifractal cascade [2], [3] and [4]. Such multifractal processes provide us with a new model with attractive stochastic properties, which can reproduce some stylized facts of financial markets: fat tails, volatility clustering, long-term dependence and multi-scaling. However, the practical applicability of earlier versions of multifractal models suffers from its combinatorial nature and from its non-stationarity due to the restriction to a bounded interval. The most attractive feature of these processes is their ability to generate several degrees of long memory in different powers of returns. More recently, Calvet and Fisher [4] and [5] have introduced a new family of iterative multifractal models: the Markov-switching multifractal (MSM) model which preserves the hierarchical, multiplicative structure of the earlier models, but possesses appealing asymptotic properties. In the recent years, there has been an increasing interest in the application of the scaling concept to financial markets[6], [7], [8], [9] and [10]. Scaling properties in time series have been studied in the literature by using several techniques [4] and [11]. For the interested reader let us briefly mention here some of them such as the seminal work of Hurst [12] on rescaled range statistical analysis and the modified rescaled range analysis of Lo [13], the multi-affine analysis [14], the detrended fluctuation analysis [15], [16] and [11], multifractal detrended fluctuation analysis [17], the partition function approach [18] and [19] and the detrending moving average [20]. The challenge for empirical and theoretical researches lies in uncovering what scaling laws tell us about the underlying mechanisms that generate the data. Furthermore, empirical scaling evidences should be used as stylized facts that any theoretical model should also reproduce. In addition to this findings, Schmitt et al. [21] show that the additive models like Brownian, fractional Brownian, Lévy, Truncated Lévy and fractional Lévy models are not compatible with the properties of financial data and they propose the multifractal framework as an alternative. Authors in Ref. [22] argue that structure function of generally non-multifractal processes fitted to the financial time series behaves as those of a genuine multifractal process. Jiang and Zhou [18] find that scaling behavior of the original financial datasets cannot be distinguished from those of shuffled time series. Zhou [23] investigates the components of the empirical multifractality of financial returns and finds that temporal structure has minor impact on the multifractal spectrum. More recently, Schmitt et al. [24] find that introduction of Euro had no influence on the multifractal behavior of the Euro–Yuan exchange rate. In this paper, we analyze the multi-scaling properties of different time series by means of the generalized Hurst exponent (GHE) which provides a robust estimator to compute these scaling properties [25] and [26]. There are two types of scaling behaviors studied in the finance literature: the behavior of the returns distribution tails as a function of the movement size, but keeping the time interval of the returns constant; the behavior of some forms of volatility measure as a function of the time interval on which the returns are measured. In this study we investigate the link between the two in real and simulated data series. Furthermore, to distinguish between the effects on multifractality from time-correlations and from fat-tailed return distributions we apply the GHE on shuffled data series where the time history is destroyed but the return distribution is maintained. The main part of this paper concerns the study of the source of the multifractality in financial datasets. The origin of multifractality has been discussed in the literature, by means of the partition function approach [27] and by means of the multifractal detrended fluctuation analysis [17] and [23]. In particular, Kantelhardt et al. [17] points out that in general, we can find two types of multifractality in the time series: (i) Multifractality due to a broad probability density function; (ii) Multifractality due to different long-range correlations of the small and large fluctuations in time. In the first case, multifractality cannot be removed by shuffling the series. In the second case, the corresponding shuffled series should exhibit uni-fractality, since all long-range correlations are destroyed by shuffling. In case that both types are present in the data, shuffled data should show different multifractality than the original series. We contribute to the debate about scaling properties of the financial returns with a rigorous statistical analysis of the problem. In particular, we investigate the two types of multifractality both on real financial data and MSM simulated time series. To test the robustness of our findings, we also compare the results to the simulations from αα-stable distribution, fractional Brownian motion and autoregressive fractionally integrated moving average model with stable innovations which allows us to study the impact of short memory in the heavy tailed process with long range dependence. Our study is structured as follows. Sections 2 and 3 review the Markov-switching multifractal (MSM) and the generalized Hurst exponent (GHE) methods. Section 4 reports the empirical and simulation-based results describing the two types of multifractality in the data. In Section 5 we check the results for robustness by comparing the simulations from αα-stable distribution, fractional Brownian motion and fractional autoregressive moving average model with stable innovations. Finally, results are followed by the conclusions given in Section 6.

In this paper, we present and discuss several new results on the multifractal behavior of different financial market datasets. By computing and comparing the scaling exponents for empirical and simulated data, we show that the generalized Hurst exponent approach is a powerful tool to detect the scaling property of financial markets data for different stochastic variables, and it is also a good tool to test the reliability of models such as MSM. By using Monte Carlo simulations as well as empirical analysis we show that the MSM model is able to capture the multi-scaling behavior of the volatility series, but it is not able to replicate the scaling properties of the prices. Large simulations show some agreement of the MSM model with empirical data, but most of the multifractality seem to be originated from the broad distribution of the series and not from the time-dependences in the model. However, we observed a consistent increment of the multifractality after shuffling, i.e. when all temporal correlations are removed while the return distribution is preserved. We demonstrated that in some cases the increment is significantly larger than the confidence interval. We argue that short memory time-correlation in the data may be the cause of this increase in the multifractality. We have further compared our results to the simulated series from uni-fractal fractional Brownian motion containing only long-range dependence, as well as heavy-tailed αα-stable Lévy distribution and autoregressive fractionally integrated moving average process with stable innovations and the outcomes confirm our results. In conclusion, from the present analysis we can argue that most of the multifractality observed in the stock markets data is the consequence to a broad fat-tailed distribution of the returns, while some part may be affected by the presence of short memory process in the data. Our results are statistically robust and hold to various types of financial data; stock market indices, exchange rates as well as interest rates.