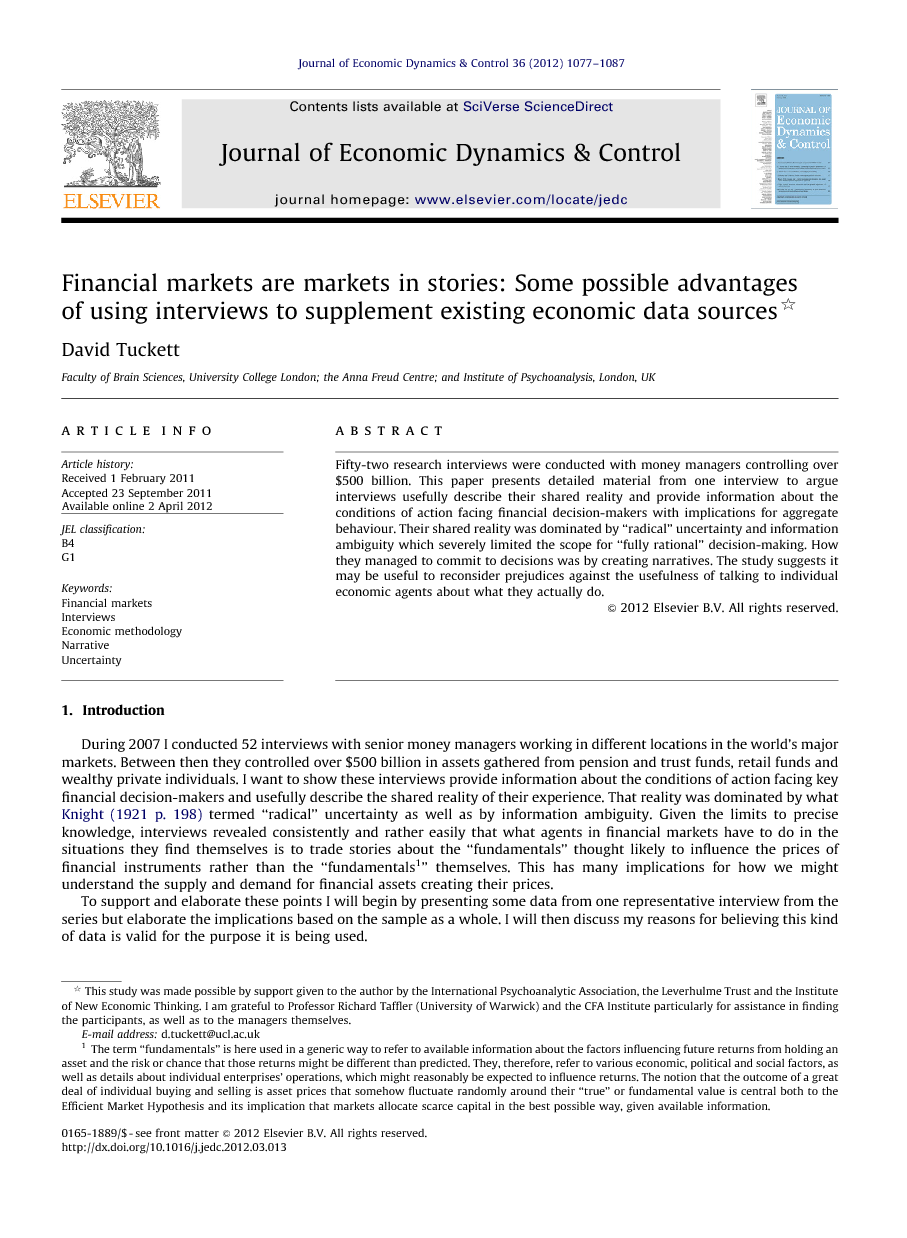 Fifty-two research interviews were conducted with money managers controlling over $500 billion. This paper presents detailed material from one interview to argue interviews usefully describe their shared reality and provide information about the conditions of action facing financial decision-makers with implications for aggregate behaviour. Their shared reality was dominated by “radical” uncertainty and information ambiguity which severely limited the scope for “fully rational” decision-making. How they managed to commit to decisions was by creating narratives. The study suggests it may be useful to reconsider prejudices against the usefulness of talking to individual economic agents about what they actually do.

During 2007 I conducted 52 interviews with senior money managers working in different locations in the world's major markets. Between then they controlled over $500 billion in assets gathered from pension and trust funds, retail funds and wealthy private individuals. I want to show these interviews provide information about the conditions of action facing key financial decision-makers and usefully describe the shared reality of their experience. That reality was dominated by what Knight (1921 p. 198) termed “radical” uncertainty as well as by information ambiguity. Given the limits to precise knowledge, interviews revealed consistently and rather easily that what agents in financial markets have to do in the situations they find themselves is to trade stories about the “fundamentals” thought likely to influence the prices of financial instruments rather than the “fundamentals1” themselves. This has many implications for how we might understand the supply and demand for financial assets creating their prices. To support and elaborate these points I will begin by presenting some data from one representative interview from the series but elaborate the implications based on the sample as a whole. I will then discuss my reasons for believing this kind of data is valid for the purpose it is being used.

My aim in this contribution has been to demonstrate that at least in some circumstances economists can benefit from research interview data. Assuming the findings describe the conditions decision-makers face prior to action and will be replicated in further work, they provide a reality check from which to consider existing theory and perhaps to develop new thinking. First, the interviews demonstrate very directly that the widely held distinction between “rational” and “irrational” behaviour in financial markets is not meaningful and should be abandoned. This is not because these or other findings suggest there are no irrational or over-emotional investors or that cognitive biases are infrequent, but because few professional investors make decisions that actually appear irrational to them at the time they are made. The fund managers interviewed all put a great deal of effort into collecting information, weighing and sifting it, testing for biases and errors and so thinking carefully about how to make the best possible decisions. From this point of view, they were all as rational as they could be in the situations in which they found themselves. In this connection Herbert Simon observed “To anyone who has observed organisations it seems obvious enough that human behaviour in them is, if not wholly rational, at least in good part intendedly so” ( Simon, 1997 p. 88). Simon also observed that when we speak of people behaving irrationally “what we generally mean is that their goals are not our goals, or that they are acting on the basis of invalid or incomplete information, or they are ignoring future consequences of their actions, or that their emotions are clouding their judgments or focusing their attention on momentary objectives” ( Simon, 1997 p. 88). Formal rational expectations theory, of course, does not require that my respondents' predictions about the future would be always correct. They can be incorrect so long as they are rational, meaning that on average, over the long run, they need to be correct—something which critics have often noted is hard to disprove. From the descriptions I have offered it may be more important that it just misses the point. A crucial requirement of rational expectations theory which is easier to test is that in making their decisions my respondents should have taken into account all relevant information and made predictions that on average were unbiased. They certainly tried to do the former but what I have been arguing is that with radical uncertainty it is quite impossible for them to do the latter and it is quite misleading to think of markets “as if” this is what is done. Rational explanations theory aims at being fully determined, which means that it implies a single solution for each decision consistent with the available information or, if not, that solutions are random. The point of the narratives my respondents created was to allow them to be comfortable, once they had done everything they could, with what a rational expectations theorist would term their bias, which they much preferred to the idea of making decisions based on assuming outcomes could be treated as random. 12 Viewed from the context revealed by interviews the essential problem with rational expectations theory is that it can only work if deviations in expectations are assumed to be random rather than biased and that any systematic pattern to deviations becomes known and is then incorporated in decision-making. While it is entirely reasonable to suppose from the interviews that agents would copy strategies that seem to work, radical uncertainty, once again, prevents them or anyone else from “knowing” such strategies are better than others and so incorporating valid ones. The assumptions of rational expectations theory, in fact, fly in the face of everything my respondents were paid to do, were believed to achieve and were trying to do. To model markets “as if” this is how agents are constrained to behave fails to pick up the key element of what agents are trying to do or the context in which they do it (uncertainty and information ambiguity but also how they are incentivised and above all how they are judged to have achieved their set objectives) and is likely to be actively misleading about the consequences of their interaction, as recent years have shown perhaps. Rational expectations theory aims to be fully determined. The realities described by the interviews suggest that greater and more accurate understanding will come from theories which make room for imperfect knowledge—such as in Frydman and Goldberg's (2011) recent formulation of macroeconomic and finance theory building on the work of Keynes and Hayek. My findings also suggest that assessment of risk in financial markets needs to resist full-determination (See also Rebonato, 2007) and that efforts to model different agents using different rules for decision-making and interacting between them in differently defined environments (as in agent based modelling) are much more likely to produce interesting predictions and insights than the more standard approaches. Such new frameworks might be illuminated by further interviewing and other sources of data collection and might incorporate (in simulations or experiments) stories about phantastic objects and different states of mind and so eventually provide better understanding as to how and why ordinary everyday financial markets (as presently constituted) can become captured by dangerously exciting stories (in which excitement about gain is divided off from fear of loss), problematic mental states and strange group processes in which realistic thinking is fundamentally disturbed and markets become unstable.