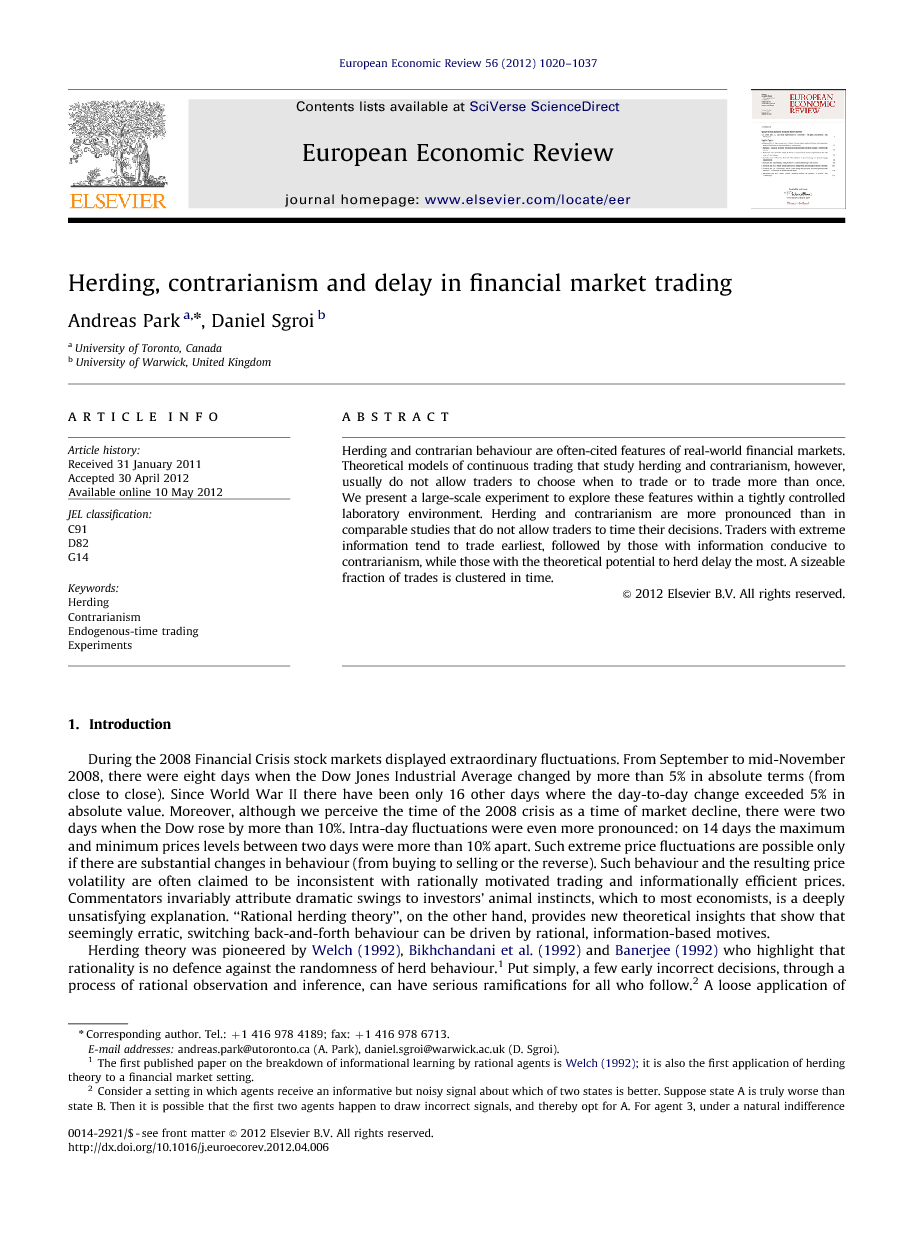 Herding and contrarian behaviour are often-cited features of real-world financial markets. Theoretical models of continuous trading that study herding and contrarianism, however, usually do not allow traders to choose when to trade or to trade more than once. We present a large-scale experiment to explore these features within a tightly controlled laboratory environment. Herding and contrarianism are more pronounced than in comparable studies that do not allow traders to time their decisions. Traders with extreme information tend to trade earliest, followed by those with information conducive to contrarianism, while those with the theoretical potential to herd delay the most. A sizeable fraction of trades is clustered in time.

Herding has long been suspected to play a role in financial market booms and busts. Recent theoretical work shows that informational herding is possible if the signal likelihood function for traders has a specific shape. Other work shows that when timing is endogenous to the decision, traders with good or bad news should trade earlier than those with less informative signals. Giving traders a choice of when to act is not only natural, but there are also important insights that can be gleaned from such an analysis. It is not clear ex ante, how the decision to time one's trades should affect herding and contrarianism. One possibility is that when herding-prone types delay their actions systematically, herd behaviour can become more pronounced and significant compared to exogenous timing settings. On the other hand, research by Drehmann et al. (2005) and Cipriani and Guarino (2005) has revealed that people have a general tendency to act as contrarians. Another possibility thus is that by removing the artificial friction of exogenous timing, herding disappears. Our work directly addresses this open question. Having collected almost 2000 trades, we found that subjects' decisions were generally in line with the qualitative predictions of the information theory learning theory when that theory admits rational herding and contrarianism. For example, types theoretically prone to herd or be contrarian are the significant and important source of this kind of behaviour when it does arise. Furthermore, types with extreme information about an asset (both good or bad) trade systematically earliest, and those with signals conducive to contrarianism trade earlier than those with information conducive to herding. We thus find strong evidence for the impact of the type of information both with respect to the direction and the timing of trades. We can break our findings down further into four key messages. First, we find additional and qualitatively novel support for information-based motives for herding theory in the laboratory. Second, adding endogenous-timing leaves the key predictions of sequential herding theory unchanged as far as the direction of trade is concerned. Therefore, our results suggest that earlier work which forces subjects to act in a strict sequence remains valid even though the timing assumptions impose an artificial friction. Third, we combine two literatures by linking information-based trade directions and timing and show that signals that push subjects towards herd or contrarian behaviour also push them towards delay, relative to the signals that guide subjects towards clear buy or sell decisions. This point is a potentially important avenue for future research as the combination of herding/contrarianism in decision-making and clustering in time can work together to potentially exacerbate/counter prices movements which drift away from fundamentals. Finally, we also identify a new experimental stylized fact in that traders tend to cluster their actions in time. This final key finding represents a potentially important avenue for future research.