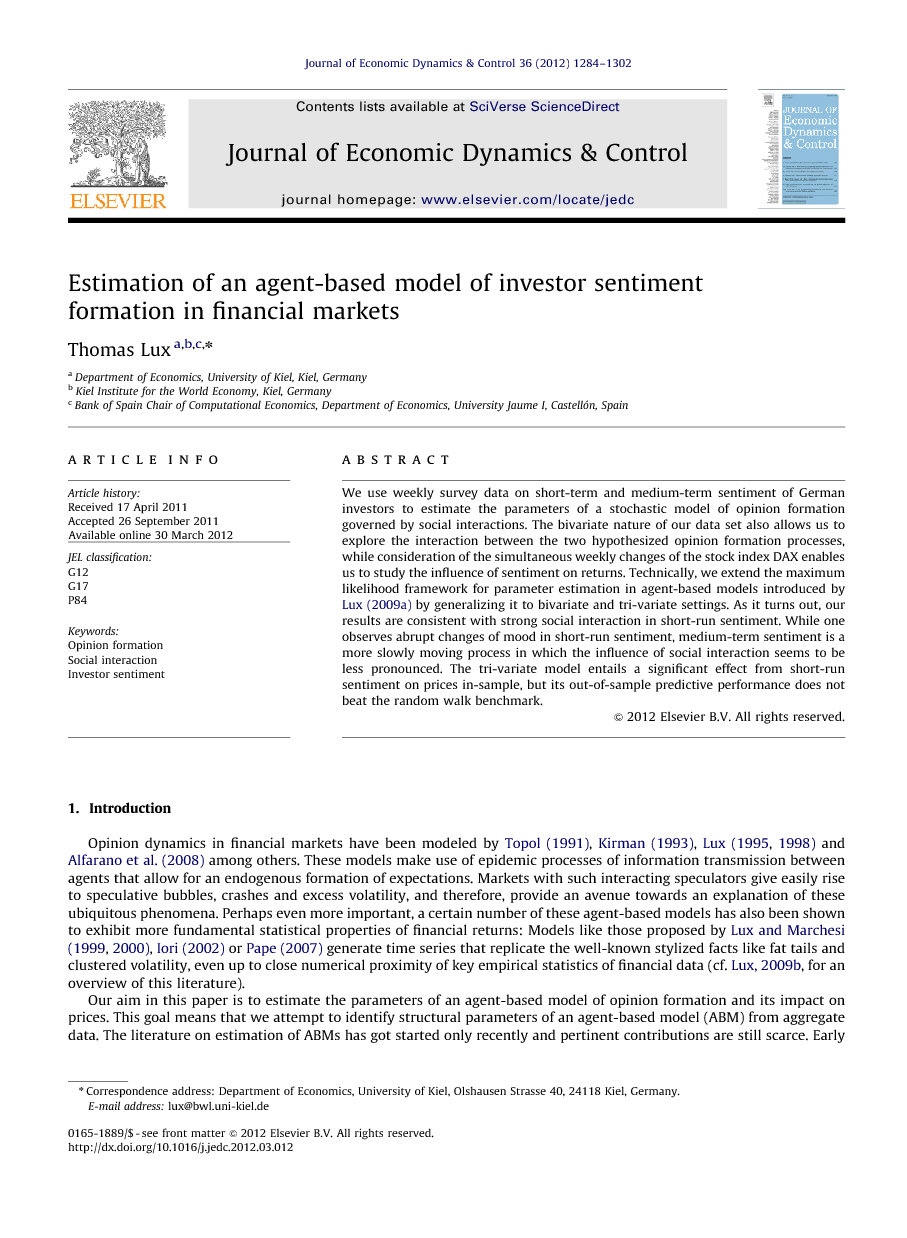 We use weekly survey data on short-term and medium-term sentiment of German investors to estimate the parameters of a stochastic model of opinion formation governed by social interactions. The bivariate nature of our data set also allows us to explore the interaction between the two hypothesized opinion formation processes, while consideration of the simultaneous weekly changes of the stock index DAX enables us to study the influence of sentiment on returns. Technically, we extend the maximum likelihood framework for parameter estimation in agent-based models introduced by Lux (2009a) by generalizing it to bivariate and tri-variate settings. As it turns out, our results are consistent with strong social interaction in short-run sentiment. While one observes abrupt changes of mood in short-run sentiment, medium-term sentiment is a more slowly moving process in which the influence of social interaction seems to be less pronounced. The tri-variate model entails a significant effect from short-run sentiment on prices in-sample, but its out-of-sample predictive performance does not beat the random walk benchmark.

Given the long lasting interest in sentiment data in financial economics, it might come as a surprise that there is hardly any empirical work estimating and testing behavioral models for such data. Of course, under an efficient market perspective, such data would represent a relatively unimportant noise component. However, evidence exists for a certain impact of sentiment on prices. While for U.S. data, Granger causality in the short-run seems to run from returns to sentiment (Brown and Cliff, 2004), our German data indicate a causal relationship in the opposite direction (Lux, 2010). Even for the U.S., however, some predictive power of sentiment has been found for longer horizons (Brown and Cliff, 2005). The significant influence of sentiment on returns in the German data motivated us to adopt a behavioral, agent-based framework for the dynamics of short- and medium-run sentiment. In order to estimate the parameters of such models, we could take stock of an approach proposed in Lux (2009a) using a numerical maximum likelihood procedure. In terms of methodology, the contribution of this paper is the extension of this estimation technique to higher dimensions. Monte Carlo simulations in Lux (2009a) showed that this method performed well even in relatively small samples like the present one. Choosing appropriate methods from the large range of finite difference approximations for partial differential equations allowed an extension of the univariate approach to 2D and 3D. Materially, we found evidence for strong social interaction in short-term sentiment and only moderate social influences in medium-run sentiment. With moderate interaction, estimation of the agent-based model appears somewhat cumbersome because of almost collinear behavior of some parameters. As we have seen, in this case, a more parsimonious Ornstein–Uhlenbeck process provides practically the same fit to the data. One could, therefore, use a simple macroscopic equation instead of the full microscopic Markov process. We believe that results like this one are important in that they provide an indication of the necessary degree of complexity of behavioral models in different scenarios (an issue very much neglected in economics where theoretical models are mostly either based on the assumption of a representative agent or an infinite population). This also means that there is not necessarily a conflict between agent-based modeling and modelling of aggregate data via structural equations. On the contrary, combining an analytical approach for the derivation of appropriate approximations to the agent-based stochastic Markov process with an approach for empirical estimation of the later, we were able to show that under certain conditions two very different functional specifications can yield practically undistinguishable results. However, this congruence crucially depends on the parameter values and might break down (as it does here for S-Sent) if other parameters lead to another type of system behavior. Overall, most of our results were in nice coincidence with the previous VAR results of Lux (2010). The social dynamics estimated for S-Sent and M-Sent, therefore, seems a potential candidate for a data generating process of our sample. While our forecasting exercise turned out disappointing results for price forecasts, this might be due to potential non-stationarity of the returns process during our out-of-sample period that coincides with the last three years of financial turmoil. Due to the computational demands of the present approach, all forecasts were conducted on the base of the fixed parameter estimates from the in-sample period. Note that more successful forecasts from VAR models were based on iterative updating of both paramaters and the selection for the appropriate VAR subset model, and did indeed find quite some variation of the influence of S-Sent vs M-Sent on returns throughout pretty much the same out-of-sample period. We might hope that moving towards iterative updating of parameters for the present approach might also help to capture better the subtleties of joint causation from various sentiment indicators on returns. Current attempts at developing a fully parallel algorithm for the present approach will allow us to revisit the forecasting capacity of the opinion models with an iterative approach in the near future. We believe that the present paper and its predecessor (Lux, 2009a) could provide an avenue to empirical estimation of a broad range of agent-based models. While we noted that we reached the limits of current computational power at our 3D applications, we also note that we have only used a small range of numerical schemes so far. Methods using adaptive adjustment of meshes or refined methods for parallelization of tasks might allow us to dramatically reduce computation time in future applications. Further research in this direction should be of high priority.