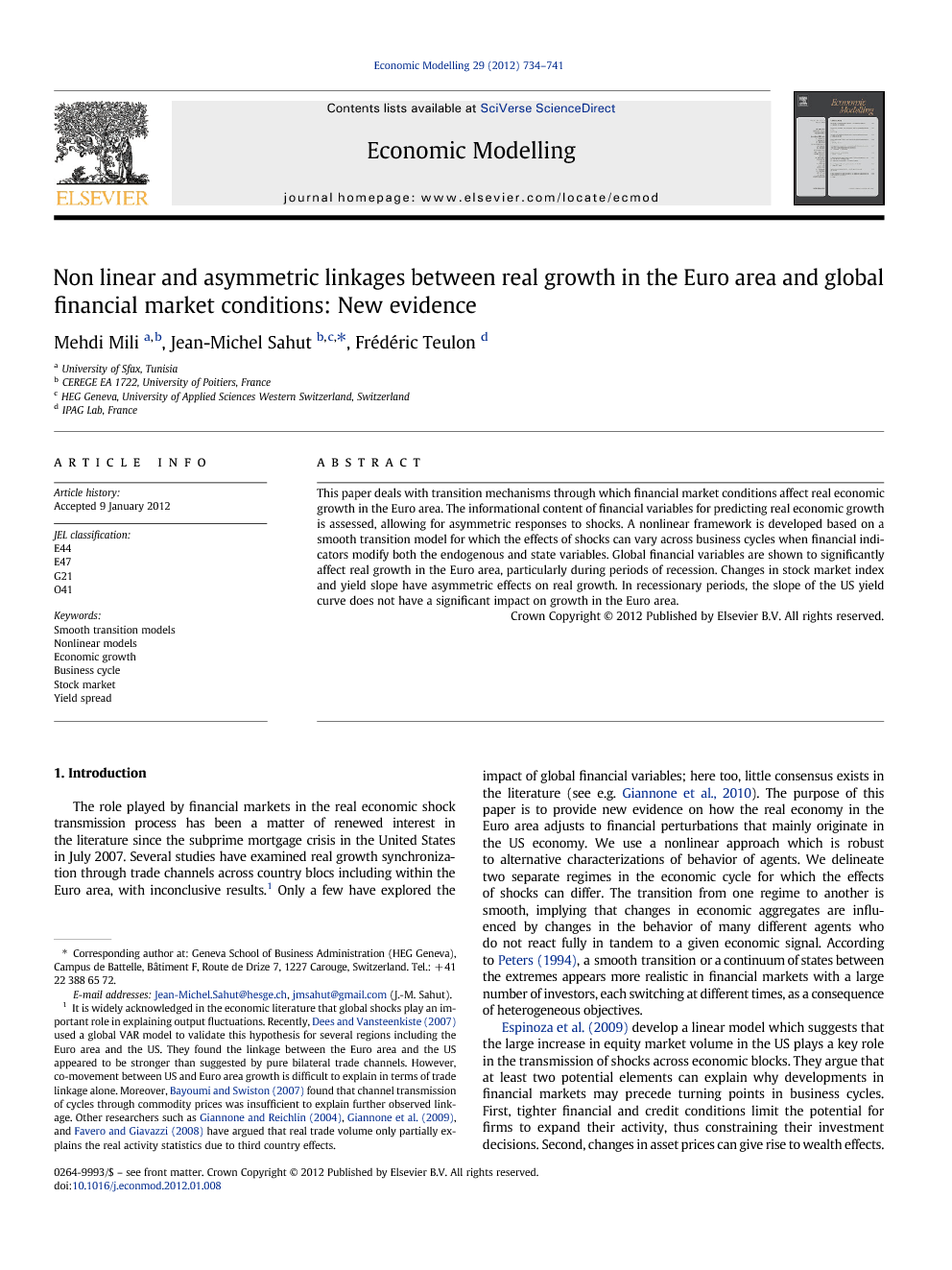 This paper deals with transition mechanisms through which financial market conditions affect real economic growth in the Euro area. The informational content of financial variables for predicting real economic growth is assessed, allowing for asymmetric responses to shocks. A nonlinear framework is developed based on a smooth transition model for which the effects of shocks can vary across business cycles when financial indicators modify both the endogenous and state variables. Global financial variables are shown to significantly affect real growth in the Euro area, particularly during periods of recession. Changes in stock market index and yield slope have asymmetric effects on real growth. In recessionary periods, the slope of the US yield curve does not have a significant impact on growth in the Euro area.

The role played by financial markets in the real economic shock transmission process has been a matter of renewed interest in the literature since the subprime mortgage crisis in the United States in July 2007. Several studies have examined real growth synchronization through trade channels across country blocs including within the Euro area, with inconclusive results.1 Only a few have explored the impact of global financial variables; here too, little consensus exists in the literature (see e.g. Giannone et al., 2010). The purpose of this paper is to provide new evidence on how the real economy in the Euro area adjusts to financial perturbations that mainly originate in the US economy. We use a nonlinear approach which is robust to alternative characterizations of behavior of agents. We delineate two separate regimes in the economic cycle for which the effects of shocks can differ. The transition from one regime to another is smooth, implying that changes in economic aggregates are influenced by changes in the behavior of many different agents who do not react fully in tandem to a given economic signal. According to Peters (1994), a smooth transition or a continuum of states between the extremes appears more realistic in financial markets with a large number of investors, each switching at different times, as a consequence of heterogeneous objectives. Espinoza et al. (2009) develop a linear model which suggests that the large increase in equity market volume in the US plays a key role in the transmission of shocks across economic blocks. They argue that at least two potential elements can explain why developments in financial markets may precede turning points in business cycles. First, tighter financial and credit conditions limit the potential for firms to expand their activity, thus constraining their investment decisions. Second, changes in asset prices can give rise to wealth effects. Dees et al. (2007) develop a global VAR model for 26 countries. Their simulations suggest that financial shocks are transmitted relatively rapidly, and are often amplified as they travel from the US to the Euro area. Equity returns and long-term yields seem far more synchronous compared to real output, inflation and short-term interest rates. Changes in the yield curve contain information about future inflation and the term structure of real rates and; future production in turn responds to changes in inflation expectations and expected real rates. Simplified linear structures as in Espinoza et al. (2009) and in standard VAR models are limited in the sense that they impose symmetry in the responses to shocks. A number of studies have attempted to investigate linkages between real activity and financial variables with nonlinear alternatives which do not have this restriction.2 Univariate models for output growth include Hamilton's Markov-Switching (MS) model (1989) and the Threshold Autoregressive (TAR) models of Tiao and Tsay (1994), Potter (1995), and Pesaran and Potter (1997). Extensions to these univariate specifications that include economic indicators that help to compute forecasts, include Filardo, 1994 and Filardo, 1999, Granger and Teräsvirta (1993), Hamilton and Perez-Quiros (1996), Krolzig, 1997 and Krolzig, 2000, Estrella and Mishkin (1998), Blix (1999), Warne (2000), Beine et al. (2003), and Camacho and Perez-Quiros (2002). More recent developments have led to the characterization of business-cycle asymmetries via a dynamic factor model with regime switching, as in Diebold and Rudebusch (1995), Kim and Nelson (1998), Chauvet, 1998 and Chauvet, 1999, Fukuda and Onodera (2001), Kim and Murray (2002), and Chauvet and Potter (2002). Our paper contributes to this body of literature by developing a new nonlinear model that takes financial variables into account in forecasting economic growth. Our framework extends Espinoza et al. (2009) and Khan and Abdelhak (2009) who use a linear symmetric response model to test the European economy's response to U.S. shocks to allow for asymmetric effects during recession and expansion regimes. The remainder of this paper is organized as follows. Section 2 examines the nonlinear relationship between financial development and economic growth. Section 3 develops a specific nonlinear LSTR model for real growth in the Euro area. Empirical results follow in Section 4. In Section 5 we test the forecasting accuracy of the nonlinear model. The paper concludes in Section 6.

The existence of transition mechanisms through which financial indicators affect real economic growth has been widely discussed in the economic literature. This paper develops a nonlinear model of the business cycle for the Euro area that incorporates both Euro area and US financial variables for predicting economic growth. We show that real economic growth forecasts need to be interpreted within a nonlinear framework. We used a Logistic Smooth Transition Model that identifies two distinct extreme regimes in the economic cycle, a recession regime and an expansion regime. Our results show that financial variables play a significant role in forecasting economic growth. Our framework allowed us to reproduce some stylized facts, notably the asymmetry of the responses of real GDP to its determinants. In periods of recession, the slope of the US yield curve does not have a significant impact on growth in the Euro area. This finding suggests that EU policymakers do not need to be overly concerned about its direct impact on the business cycle.