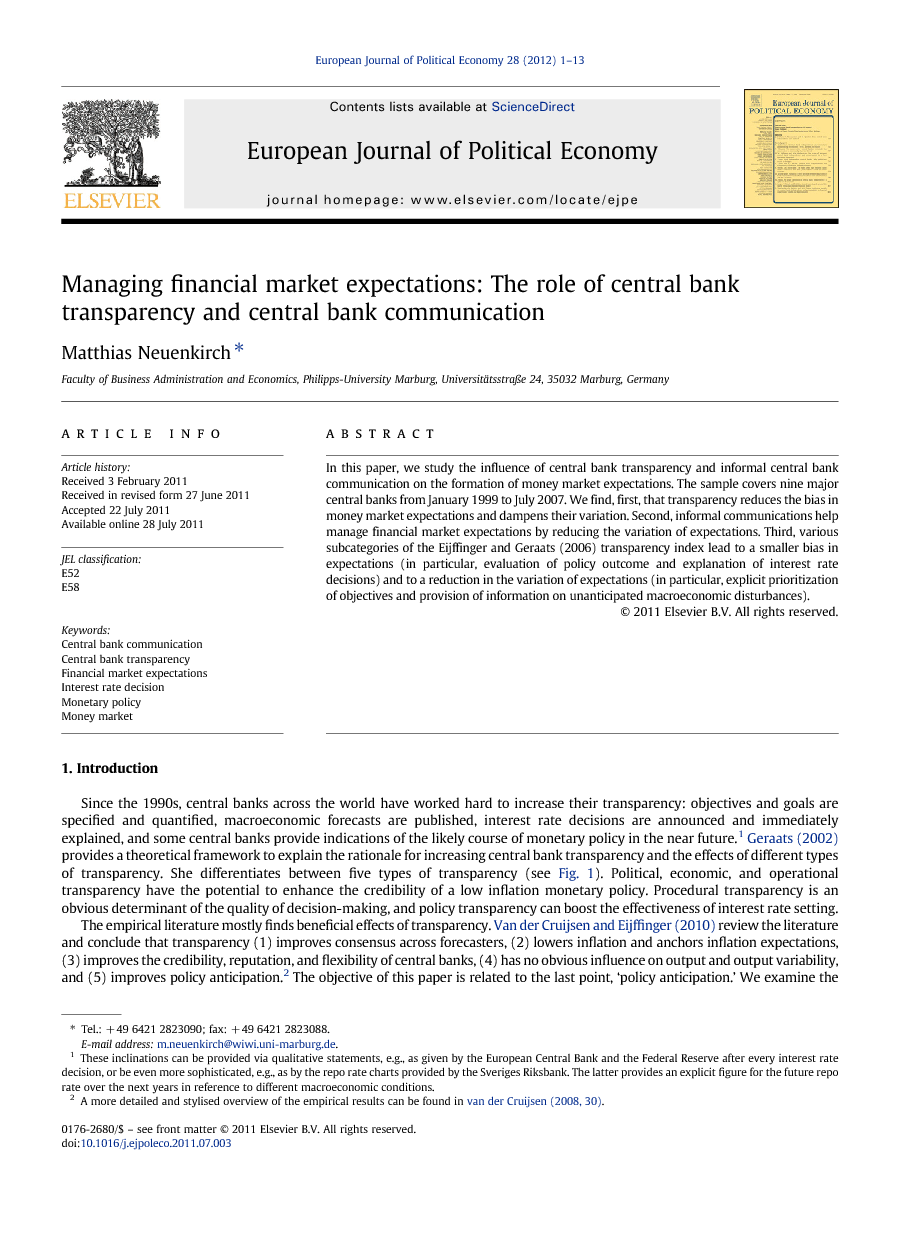 Since the 1990s, central banks across the world have worked hard to increase their transparency: objectives and goals are specified and quantified, macroeconomic forecasts are published, interest rate decisions are announced and immediately explained, and some central banks provide indications of the likely course of monetary policy in the near future.1Geraats (2002) provides a theoretical framework to explain the rationale for increasing central bank transparency and the effects of different types of transparency. She differentiates between five types of transparency (see Fig. 1). Political, economic, and operational transparency have the potential to enhance the credibility of a low inflation monetary policy. Procedural transparency is an obvious determinant of the quality of decision-making, and policy transparency can boost the effectiveness of interest rate setting. Full-size image (17 K) Fig. 1. Theoretical framework for central bank transparency. Figure options The empirical literature mostly finds beneficial effects of transparency. Van der Cruijsen and Eijffinger (2010) review the literature and conclude that transparency (1) improves consensus across forecasters, (2) lowers inflation and anchors inflation expectations, (3) improves the credibility, reputation, and flexibility of central banks, (4) has no obvious influence on output and output variability, and (5) improves policy anticipation.2 The objective of this paper is related to the last point, ‘policy anticipation.’ We examine the impact of transparency on the course of short-term interest rates. One question is of particular interest: Does a higher degree of transparency improve the formation of expectations in the money market in the period between two interest rate decisions? Our survey starts in January 1999 with the inception of the ECB and ends in July 2007.3 We focus on nine countries in this survey: Australia (AUS), Canada (CAN), the Euro area (EMU), Japan (JAP), New Zealand (NZ), Sweden (SWE), Switzerland (SUI), the United Kingdom (UK), and the United States (US). Econometrically, we employ country-specific OLS models and a pooled OLS model to assess the following research questions: (1) Does transparency decrease the expectation bias in money markets? (2) Is the variation of money market expectations reduced by a higher degree of transparency? (3) Is transparency the only factor improving the formation of expectations in money markets or can central banks use frequent informal communication with the public as a substitute for transparency? As endogenous variables, we employ two newly constructed indicators that measure the bias and variation of money market expectations over the entire intermeeting period. The remainder of this paper is organised as follows. Section 2 reviews the literature and explains the paper's contribution. Section 3 introduces the data set and explains our econometric methodology. Section 4 presents the country-specific results for the influence of transparency and communication on central banks’ ability to manage financial market expectations. Section 5 shows the corresponding pooled model results. Section 6 concludes.