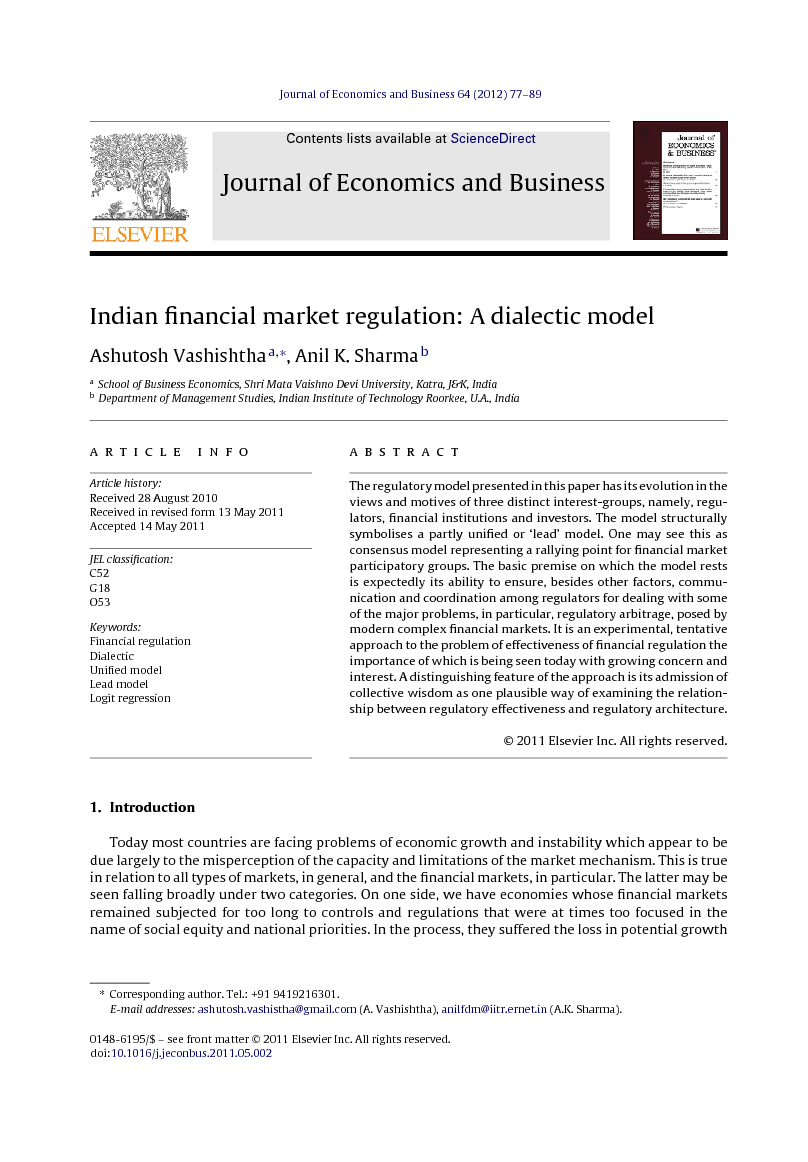 The regulatory model presented in this paper has its evolution in the views and motives of three distinct interest-groups, namely, regulators, financial institutions and investors. The model structurally symbolises a partly unified or ‘lead’ model. One may see this as consensus model representing a rallying point for financial market participatory groups. The basic premise on which the model rests is expectedly its ability to ensure, besides other factors, communication and coordination among regulators for dealing with some of the major problems, in particular, regulatory arbitrage, posed by modern complex financial markets. It is an experimental, tentative approach to the problem of effectiveness of financial regulation the importance of which is being seen today with growing concern and interest. A distinguishing feature of the approach is its admission of collective wisdom as one plausible way of examining the relationship between regulatory effectiveness and regulatory architecture.

Today most countries are facing problems of economic growth and instability which appear to be due largely to the misperception of the capacity and limitations of the market mechanism. This is true in relation to all types of markets, in general, and the financial markets, in particular. The latter may be seen falling broadly under two categories. On one side, we have economies whose financial markets remained subjected for too long to controls and regulations that were at times too focused in the name of social equity and national priorities. In the process, they suffered the loss in potential growth which they likely would have tapped long back. On the other side, we have the more or less market-driven economies which over-emphasized the market-efficiency hypothesis and in the process were oblivious to the potent dangers to which their financial markets were susceptible. On both counts the outcomes have been sub-optimal. The realization of these misperceptions (of regulation as much as deregulation) came to the concerned authorities mostly much after a prolonged state of slumber to make them introspect and seek right directions. Herring (1994) and Roger and Ferguson (2000) have emphasized the fact that technological advances and increasing international Financial Integration in the on-going financial modernization scenario have impacted the users of financial services. These have led to dramatic reductions in transportation, telecommunications and computation costs; expanded the scope for innovative financial products and their marketing; and above all, given rise to recurrent bouts of financial crises, crimes and scams that tend to threaten macro-economic stability and pose challenges to the managers of financial institutions as well as regulators. The recent worldwide financial melt-down has engaged the attention of policy makers and scholars. There are discussions at various forums – academic circles and various international financial institutions – as regards the causes of recent financial crises, and appropriate approaches to deal with the same. Some major studies in this regard, for instance, Larosiere (2009), UNCTAD Report (2009), CRS Report (2009) and Mohan (2009), suggest that the ideological belief in deregulation is a major factor responsible for the recent financial catastrophe. The other factors that are believed to be no less important for triggering the crises relate to global imbalances, and underestimation of risk by financial giants like Lehman brothers, Fannie Mae and Freddie Mac, Merrill Lynch and AIG. In the US, an unchecked accommodative monetary policy during the period 2002–06 led to exceedingly low interest rates that encouraged consumption and asset prices, particularly house prices. The lax lending standards together with the strong growth of complex credit derivatives (for instance, mortgage securitization) resulted in an unprecedented rise in mortgage credit mostly to low-quality borrowers against low margins and loose norms. Apparently, the frenzied lending greed of these financial giants in almost total disregard of the underlying risk was bound ultimately to spell their collapse, and that of many others through the contagion effects, nationally and internationally. These events, seen in retrospect, imply and justify the need for an effective preventive regulatory mechanism in its comprehensive connotation—regulatory objectives, provisions, enforcement, architecture, etc. In particular, there are two important lessons implicit in the recent crises, namely, the need for a cautious faith in the efficacy of deregulation, and aligning the regulatory set-up with the objectives that need to be carefully identified and ordered in tune with the modern rapidly growing complex financial markets. The thrust of this paper is to address the problem concerning the second issue, that is, the architectural aspect of financial regulation, and ascertain its relevance to regulatory effectiveness in the context of Indian financial markets. Financial regulatory system in any country is supposed to be the promoter and custodian of financial markets and a watch dog of their functioning. Its form and philosophy is dictated mainly by the stipulated macro-economic policy goals in the light of prevailing socio-economic conditions as well the onus assumed by the state to change these conditions, directly or indirectly. It is an organism evolving overtime in response to the emerging challenges and opportunities. As a result of changes within and/or outside the country, the old system gradually becomes obsolete, and a new one evolves. In the dialectic tradition of Kane (1981), the nature of the evolution process can be conceptualized in terms of stage-sequence of interest-conflicts and policy initiatives for their reconciliation. In the evolution of Indian regulatory system over the last six decades since Independence (1947) one may observe three, somewhat over-lapping, phases: (a) The phase of regulation spanning roughly over the initial three decades when it acted mainly as an instrument of state development policy. (b) The phase of deregulation representing the liberalization regime that had it's seeds sown, in fact, in early 1980s and continues since then as a precursor of market economy. (c) Re-regulation phase, that is, the phase on-going concurrently with the deregulation phase. It represents realization of the need for keeping in place necessary checks and directives for prevention of financial crimes and scams that had erupted in the 1990s in an almost free-go climate of the then financial markets. Today an intense debate is going on in India, as in some other countries, regarding desirability of shifting from sectoral regulatory structure to a unified structure so as to ensure an effective mechanism for prevention of financial instability and crimes. This paper represents an attempt to approach the regulatory paradigm-shift problem from a dialectic perspective drawing largely on the data of a survey conducted for this purpose. The objective of this research is to examine two main hypotheses underlying the on-going debate: relevance of existing regulatory structure to the emerging financial market scenario, and desirability of alternative architectural forms in this regard.

The results of regression analysis support the hypothesis that regulatory set-up should be seen as evolving overtime in relation to emerging market trends and objectives (of financial regulation). In the on-going financial scenario of modernization and globalization, protecting the economy against systemic risk; prevention of financial crimes; and creating and sustaining fair markets are believed to be the most important objectives. For realization of these objectives, there are some hurdles in the existing regulatory set-up. In particular, the dominant influence of the government agencies, lack of communication and coordination, and overlapping jurisdictions are viewed as the major factors. These tend to impair regulatory effectiveness by promoting problems like regulatory arbitrage. The present study emphasizes the need for ensuring communication and coordination among regulators and clearly defining their jurisdictions and powers as of paramount significance for regulatory effectiveness. Whether this is achievable through a structural transition or some rearrangement broadly within the existing set-up is mainly a matter of judgment in the absence of conclusive evidence in this regard. The evidence from this study suggests a shift in the direction of structural unification, or at least, establishment of some central ‘lead’ authority for ensuring communication and coordination among regulators until structural unification proposition is empirically validated. Recently, the establishing of Financial Stability Oversight Council in the USA, and the proposal for setting up of Financial Stability and Development Council in India reflect due recognition of the emerging challenges in the modern financial markets and the need for duly responding to the same.