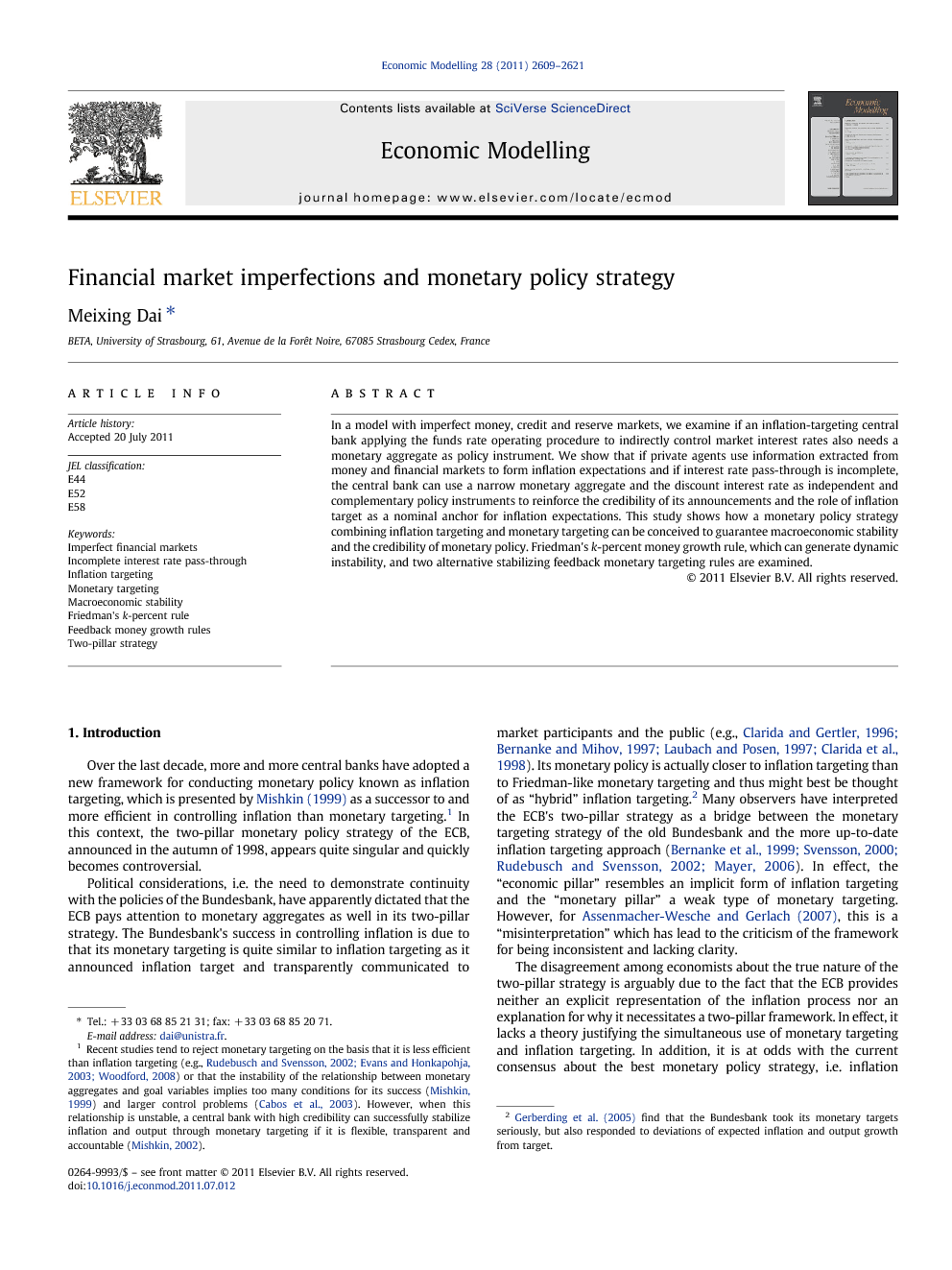 In a model with imperfect money, credit and reserve markets, we examine if an inflation-targeting central bank applying the funds rate operating procedure to indirectly control market interest rates also needs a monetary aggregate as policy instrument. We show that if private agents use information extracted from money and financial markets to form inflation expectations and if interest rate pass-through is incomplete, the central bank can use a narrow monetary aggregate and the discount interest rate as independent and complementary policy instruments to reinforce the credibility of its announcements and the role of inflation target as a nominal anchor for inflation expectations. This study shows how a monetary policy strategy combining inflation targeting and monetary targeting can be conceived to guarantee macroeconomic stability and the credibility of monetary policy. Friedman's k-percent money growth rule, which can generate dynamic instability, and two alternative stabilizing feedback monetary targeting rules are examined.

In this paper, using a model which incorporates imperfect money, credit and reserves markets and hence incomplete interest rate pass-through, we reconsider the monetary policy strategy of an inflation-targeting central bank operating under the funds rate targeting procedure. It is argued that, when money and financial markets imperfectly transmit the effects of interest rate policy to the economy, the cheap talk of central bankers may not be sufficient to ensure the announced inflation target as a credible nominal anchor of private inflation expectations. Thus, inflation-targeting central banks have good reasons to use monetary targeting together with inflation targeting. Used as a communication and anchoring device, well-conceived monetary targeting with a commitment to a long-run money growth rate consistent with the inflation target, as part of a hybrid inflation-targeting regime similar to the ECB's two-pillar monetary policy strategy, could effectively reinforce the credibility of the central bank and the role of the inflation target as a strong and credible nominal anchor for inflation expectations. It is shown that a narrow monetary aggregate, i.e. a component of the monetary base, should be regulated with a rule but not in the way conceived by Milton Friedman. The inflation-targeting regime associated with Friedman's simple k-percent money growth rule can generate macro-economic instability. In effect, to ensure the macroeconomic stability, the money growth rate must be flexibly adjusted to answer directly and/or indirectly to shocks affecting inflation adjustment, aggregate spending, and money and financial markets. It is important that feedback money growth rules are designed to sufficiently diminish the liquidity in the economy when current inflation rate varies positively and current output varies negatively. Moreover, the design of these rules needs to take careful account of the structural parameters of the economy as well as the preferences of the central bank.