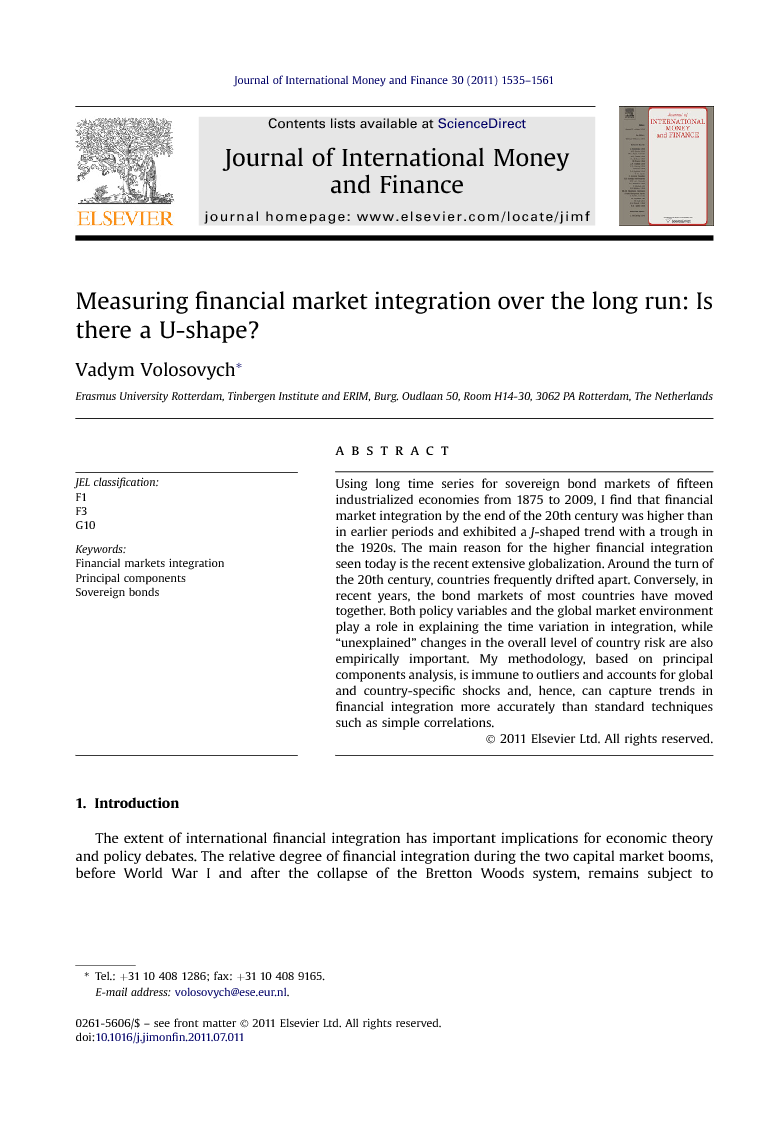 Using long time series for sovereign bond markets of fifteen industrialized economies from 1875 to 2009, I find that financial market integration by the end of the 20th century was higher than in earlier periods and exhibited a J-shaped trend with a trough in the 1920s. The main reason for the higher financial integration seen today is the recent extensive globalization. Around the turn of the 20th century, countries frequently drifted apart. Conversely, in recent years, the bond markets of most countries have moved together. Both policy variables and the global market environment play a role in explaining the time variation in integration, while “unexplained” changes in the overall level of country risk are also empirically important. My methodology, based on principal components analysis, is immune to outliers and accounts for global and country-specific shocks and, hence, can capture trends in financial integration more accurately than standard techniques such as simple correlations.

I propose a systematic methodology based on the method of principal components to quantify economic integration, explore its dynamics, and capture the episodes of market segmentation. This method overcomes the limitations of conventional approaches. Despite its computational simplicity, the suggested methodology is quite general and applicable to a variety of markets. I explore why the existing empirical literature, which relies on comovement of economic variables, lacks consensus on whether the highest degree of integration was achieved before World War I under the Gold Standard or by the late 20th century. I argue that a conventional measure of comovement, the coefficient of correlation, has limited applicability as a measure of economic integration. Based on the suggested methodology I find clear evidence of higher financial integration at the end of the 20th century compared to the earlier periods. Time-series regressions show that both policy variables (average inflation, average government deficit, and the fixed exchange-rate regime during Bretton Woods) and the global market environment (approximated by the average trade openness) played a role in explaining the time variation in the index of integration. I also find that “unexplained” changes in overall level of country risk are also empirically important, which warrants further research on the factors behind the unexplained country risk.