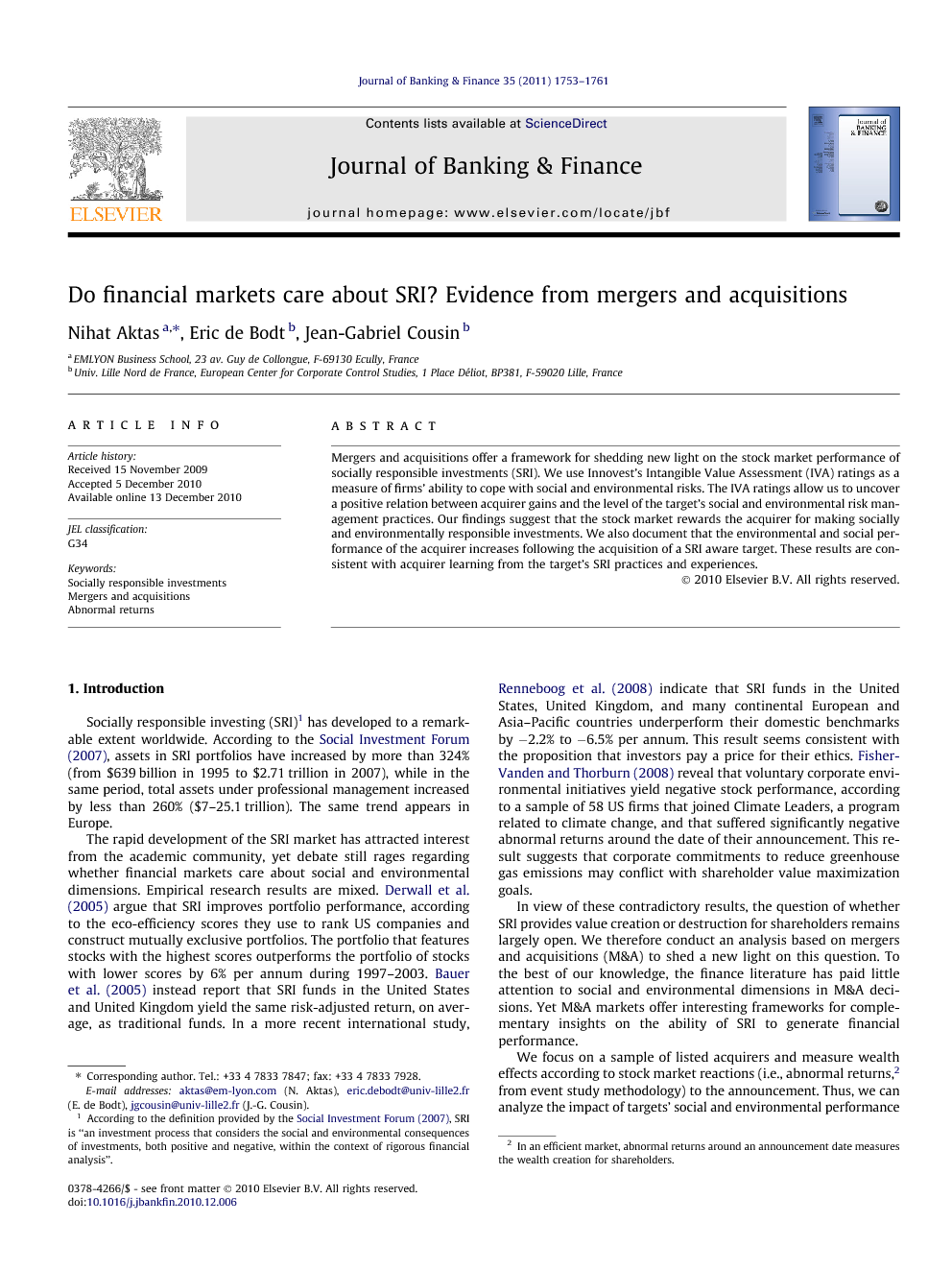 Mergers and acquisitions offer a framework for shedding new light on the stock market performance of socially responsible investments (SRI). We use Innovest’s Intangible Value Assessment (IVA) ratings as a measure of firms’ ability to cope with social and environmental risks. The IVA ratings allow us to uncover a positive relation between acquirer gains and the level of the target’s social and environmental risk management practices. Our findings suggest that the stock market rewards the acquirer for making socially and environmentally responsible investments. We also document that the environmental and social performance of the acquirer increases following the acquisition of a SRI aware target. These results are consistent with acquirer learning from the target’s SRI practices and experiences.

Socially responsible investing (SRI)1 has developed to a remarkable extent worldwide. According to the Social Investment Forum (2007), assets in SRI portfolios have increased by more than 324% (from $639 billion in 1995 to $2.71 trillion in 2007), while in the same period, total assets under professional management increased by less than 260% ($7–25.1 trillion). The same trend appears in Europe. The rapid development of the SRI market has attracted interest from the academic community, yet debate still rages regarding whether financial markets care about social and environmental dimensions. Empirical research results are mixed. Derwall et al. (2005) argue that SRI improves portfolio performance, according to the eco-efficiency scores they use to rank US companies and construct mutually exclusive portfolios. The portfolio that features stocks with the highest scores outperforms the portfolio of stocks with lower scores by 6% per annum during 1997–2003. Bauer et al. (2005) instead report that SRI funds in the United States and United Kingdom yield the same risk-adjusted return, on average, as traditional funds. In a more recent international study, Renneboog et al. (2008) indicate that SRI funds in the United States, United Kingdom, and many continental European and Asia–Pacific countries underperform their domestic benchmarks by −2.2% to −6.5% per annum. This result seems consistent with the proposition that investors pay a price for their ethics. Fisher-Vanden and Thorburn (2008) reveal that voluntary corporate environmental initiatives yield negative stock performance, according to a sample of 58 US firms that joined Climate Leaders, a program related to climate change, and that suffered significantly negative abnormal returns around the date of their announcement. This result suggests that corporate commitments to reduce greenhouse gas emissions may conflict with shareholder value maximization goals. In view of these contradictory results, the question of whether SRI provides value creation or destruction for shareholders remains largely open. We therefore conduct an analysis based on mergers and acquisitions (M&A) to shed a new light on this question. To the best of our knowledge, the finance literature has paid little attention to social and environmental dimensions in M&A decisions. Yet M&A markets offer interesting frameworks for complementary insights on the ability of SRI to generate financial performance. We focus on a sample of listed acquirers and measure wealth effects according to stock market reactions (i.e., abnormal returns,2 from event study methodology) to the announcement. Thus, we can analyze the impact of targets’ social and environmental performance on acquirer gains. Our measure of the target firm’s environmental and social performance comes from the Innovest group’s social and environmental performance ratings. An important benefit of this framework is that it avoids endogeneity issues between environmental (and/or social) performance and financial performance. The direction of causation is not well established in the literature. It is unclear whether SRI improves performance of the firm or if well-performing companies are more willing to make SRI because they have the necessary financial resources to do so (see Fisher-Vanden and Thorburn, 2008). Endogeneity is an issue in the current literature because it is almost always the environmental performance and concurrent financial performance of the same firm that are related. In the M&A framework, we relate the financial performance of the acquirer to the environmental performance of the target; these are two different firms. Our results confirm that SRI is value creating for shareholders within the context of M&A announcements. Acquirer abnormal returns are positively associated with targets’ social and environmental performance. This result indicates that the better the target is in terms of environmental and social performance, the higher the gain for acquirer shareholders. The gain is economically substantial. An increase in the target rating by one unit (over a seven-unit scale), leads to an abnormal gain of 0.9% for acquirer shareholders. For an acquirer worth $100 million in equity, this represents a dollar gain of $0.9 million. We document also that the acquirer’s environmental and social performance increases on average following the acquisition of an SRI aware target. This result provides some indication that the acquirer learns from the target’s SRI practices and experiences. Overall, our results provide further evidence that SRIs are value enhancing for shareholders in general. We organize the remainder of this article as follows: in Section 2, we lay out our two testable hypotheses. Then, we consider the sample of M&As, Innovest ratings, and empirical methods in Section 3. Section 4 is devoted to the empirical analysis. Section 5 concludes.

Relying on an original empirical framework, we analyze whether SRI benefits shareholders. The use of merger and acquisition decisions of listed companies reveals the stock market reactions to SRI announcements (i.e., acquisition of targets with social and environmental performance ratings). Our findings suggest that acquirer gains relate positively to the target’s ability to cope with social and environmental risks and more synergistic deals occur with targets that exhibit better environmental performance. Furthermore, we provide some evidence that our sample of M&A deals is not driven by disciplinary motives. The results of this study suggest several avenues for future research. Using a broader sample of M&A deals, it would be interesting to complement the short-term event study with an analysis of acquirers’ long-term financial and operational performance. Another interesting direction for future research is to deepen the analysis of disciplinary takeovers from the SRI perspective by focusing on hostile transactions. M&As offer also a fruitful framework to study the transformations of SRI practices following the acquisition of SRI aware targets. Since all listed firms are not followed systematically by rating agencies, all these extensions require the elaboration of alternative measures of environmental and social performance.