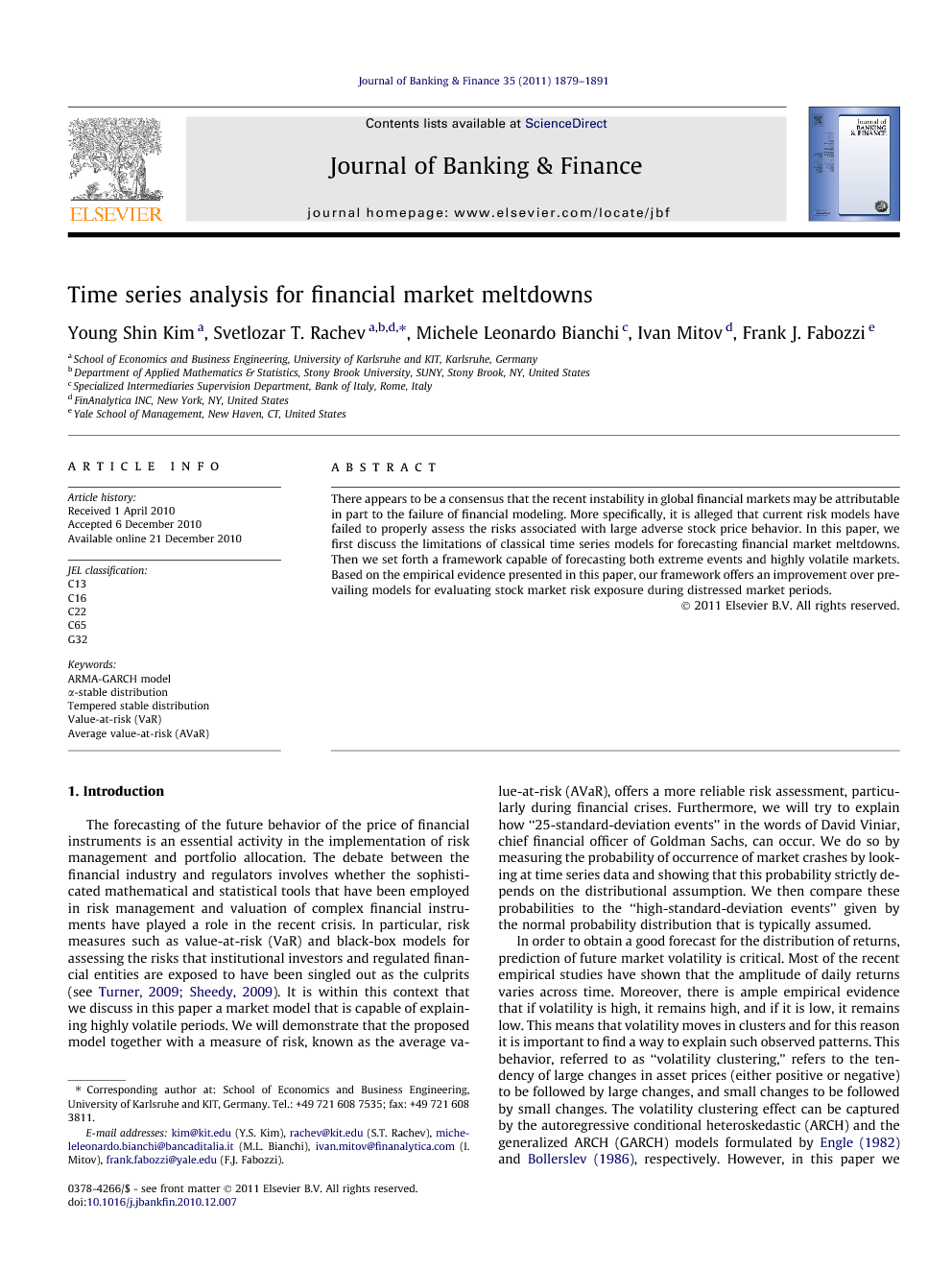 There appears to be a consensus that the recent instability in global financial markets may be attributable in part to the failure of financial modeling. More specifically, it is alleged that current risk models have failed to properly assess the risks associated with large adverse stock price behavior. In this paper, we first discuss the limitations of classical time series models for forecasting financial market meltdowns. Then we set forth a framework capable of forecasting both extreme events and highly volatile markets. Based on the empirical evidence presented in this paper, our framework offers an improvement over prevailing models for evaluating stock market risk exposure during distressed market periods.

In this paper, we discussed models with stable and tempered stable innovations, and provided an assessment of their forecasting power relative to other models widely used in the industry. The proposed models are applied to the analysis of the S&P 500 index during highly volatile markets. Our first finding is that the time series models based on the assumption of a normal innovation do not provide a reliable forecast of the future distribution of returns, even if they account for volatility clustering. The time series model based on the Student-t innovations are rejected empirically. In particular, our empirical evidence indicates that time series models with stable and tempered stable innovations have better predictive power in measuring market risk compared to standard models based on the normal distribution assumption. We also analyzed the behavior of VaR based on different distributional assumptions. We backtested VaR by considering the last four years of log returns for the S&P 500. Based on the Christoffersen Likelihood Ratio test, the two normal models investigated were rejected; however, the same test did not reject the three non-normal models investigated. Moreover, we investigated the relative difference between VaR values for three non-normal models compared to two normal models. By backtesting and studying relative differences, we concluded that the CTS-ARMA-GARCH model is the best among the five models investigated. Finally, after deriving a closed-form solution for AVaR for the ARMA-GARCH models with tempered stable innovation, we applied this formula to calculate daily AVaRs for the CTS-ARMA-GARCH models for the last four years of our study period. We found that spreads between VaR (or AVaR) with the normal-ARMA-GARCH model and AVaR with the CTS-ARMA-GARCH model increased one year prior to the crash of 2008. The CTS-based model shows a similar risk assessment with respect to the t-model. Given the tail properties of the CTS distribution, the capital charge needed by a risk manager who uses a CTS-based model is less than that required by a risk manager who uses a t-based model (or an α-stable model), and at the same time is greater than the capital required by a risk manager who employs a normal-based model. In contrast to a t- or EVT-based model, the CTS assumption allows one to define a market model to price options.