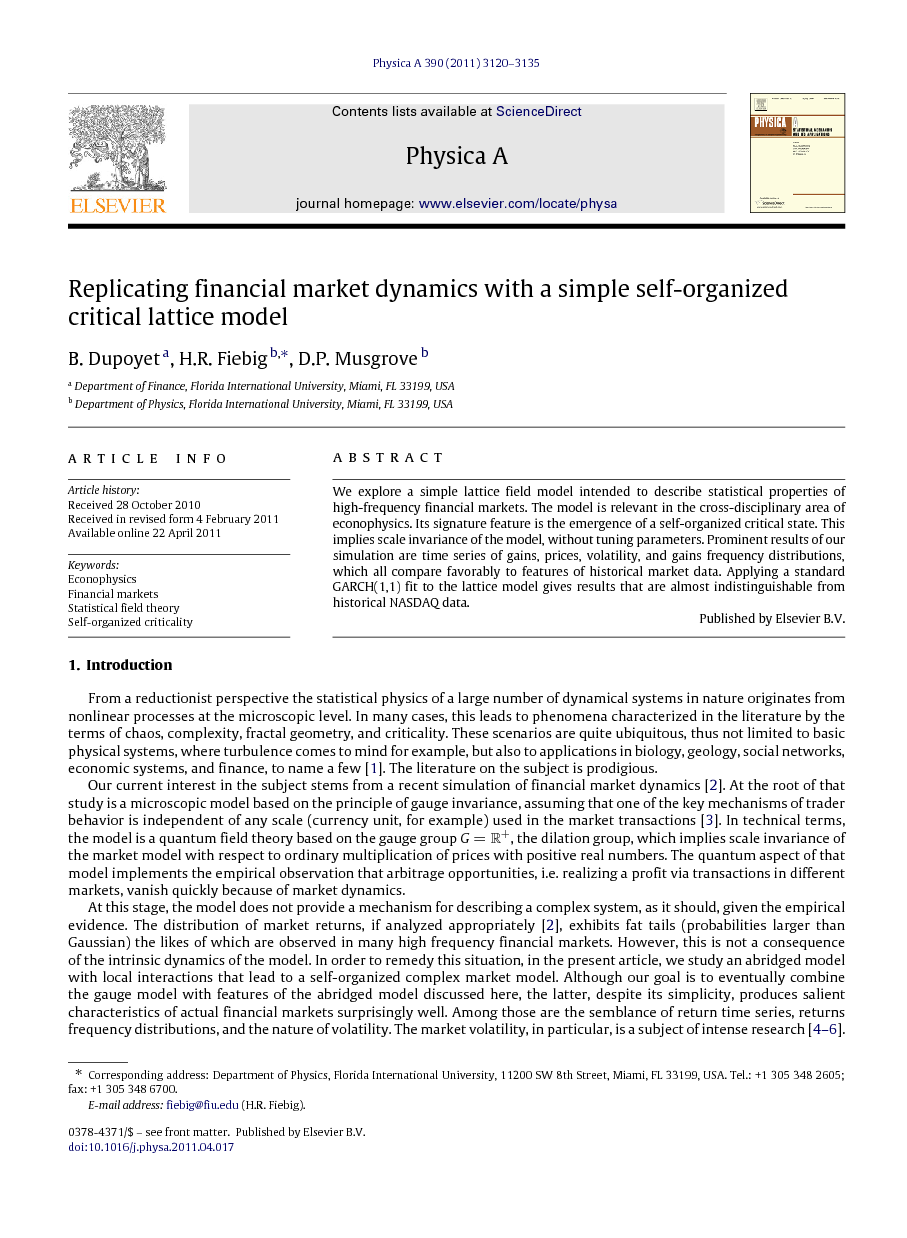 We explore a simple lattice field model intended to describe statistical properties of high-frequency financial markets. The model is relevant in the cross-disciplinary area of econophysics. Its signature feature is the emergence of a self-organized critical state. This implies scale invariance of the model, without tuning parameters. Prominent results of our simulation are time series of gains, prices, volatility, and gains frequency distributions, which all compare favorably to features of historical market data. Applying a standard GARCH(1,1) fit to the lattice model gives results that are almost indistinguishable from historical NASDAQ data.

From a reductionist perspective the statistical physics of a large number of dynamical systems in nature originates from nonlinear processes at the microscopic level. In many cases, this leads to phenomena characterized in the literature by the terms of chaos, complexity, fractal geometry, and criticality. These scenarios are quite ubiquitous, thus not limited to basic physical systems, where turbulence comes to mind for example, but also to applications in biology, geology, social networks, economic systems, and finance, to name a few [1]. The literature on the subject is prodigious. Our current interest in the subject stems from a recent simulation of financial market dynamics [2]. At the root of that study is a microscopic model based on the principle of gauge invariance, assuming that one of the key mechanisms of trader behavior is independent of any scale (currency unit, for example) used in the market transactions [3]. In technical terms, the model is a quantum field theory based on the gauge group G=R+G=R+, the dilation group, which implies scale invariance of the market model with respect to ordinary multiplication of prices with positive real numbers. The quantum aspect of that model implements the empirical observation that arbitrage opportunities, i.e. realizing a profit via transactions in different markets, vanish quickly because of market dynamics. At this stage, the model does not provide a mechanism for describing a complex system, as it should, given the empirical evidence. The distribution of market returns, if analyzed appropriately [2], exhibits fat tails (probabilities larger than Gaussian) the likes of which are observed in many high frequency financial markets. However, this is not a consequence of the intrinsic dynamics of the model. In order to remedy this situation, in the present article, we study an abridged model with local interactions that lead to a self-organized complex market model. Although our goal is to eventually combine the gauge model with features of the abridged model discussed here, the latter, despite its simplicity, produces salient characteristics of actual financial markets surprisingly well. Among those are the semblance of return time series, returns frequency distributions, and the nature of volatility. The market volatility, in particular, is a subject of intense research [4], [5] and [6]. These features are promising enough to study this simple model in its own right, which is the subject of this work. Along a one-dimensional lattice representing discrete time, the field on the sites are interpreted as returns in a model market. An updating algorithm is then applied which is loosely fashioned after the well-known proposal by Bak, Tang and Wiesenfeld (BTW) [7]; see also Refs. [8], [9], [1] and [10]. The idea is to develop a market model that is driven by microscopic entities, say traders, such that their interaction leaves the lattice field in a self-organized critical (SOC) state. In a critical state, among other things, long-range correlations of suitable observables lead to power law behavior with respect to scaling transformations. Self-organization means that the system is driven to criticality without fine-tuning any external parameters, i.e. solely by its intrinsic dynamics. It is generally realized that financial markets, being prime examples of social systems, exhibit SOC [11], [12], [13], [14] and [15]. However, to the best of our knowledge, attempts to model those from a microscopic point of view are rare [16]. In Refs. [17] and [18] percolation clusters act as investors. Assigning random percolation probabilities, power law behavior is found for the usual observables derived from stock market prices [19]. Another example of such an attempt close to the BTW evolution model is the work of Bartolozzi et al. [20]. Though close to our work in spirit, significant differences exist in terms of the updating strategy and interpretation. Our implementation of our lattice field model will produce price time series, returns and their distributions, volatility time series and their clustering features that are all strikingly similar to historical market data. Why would one like to have a market model in the first place? After all there are myriads of historical data being collected every day. A good reason is the fact that all of the collected data are merely instances of a random draw from some probability distribution, just like one throw of dice gives only one result, hiding the statistics behind it. A stochastic model on the other hand will enable us to study any number of market instances, and collect ensembles in the language of statistical physics. Observables, as averages endowed with errors, could be computed. Ultimately, a successful model could provide probability distributions for future prices, and thus be an invaluable tool for risk analysis, and the like.

By their very nature, historical market data constitute only instances of some stochastic process. It is thus desirable to have available a stochastic model of a financial market. As a result, such a model grants complete access to the market’s stochastic features through the act of drawing multiple instances, or ensembles. This allows the possibility of a detailed investigation of market dynamics and the features that define them. We have studied the properties of a stochastic lattice model which by design derives its features from next-nearest-neighbor interactions of microscopic entities that live on a linear chain in discrete time. The model is realized as a lattice field theory with field components being interpreted as market returns, and is subject to computer simulation with an updating algorithm inspired by the evolution model by Bak et al. [7] that drives the lattice field into a self-organized critical state. We present evidence, including power law behavior, that the critical state is indeed achieved. Its presence is the salient feature of the model. We compute time series of market returns, prices, volatilities, and returns frequency distributions, all of which are remarkably consistent with historical market data for the NASDAQ stock index. In particular the ‘fat tails’ feature of the returns distribution comes out effortlessly. It is worth noting that, aside from (trivial) units, the lattice model has no adjustable parameters. However, if so desired, it is straightforward to modify the updating rules by introducing external parameters. For example, asymmetry between up and down markets is easily produced. Perhaps most remarkable is the observation that standard financial industry analysis tools, in our case the GARCH(1,1) model [25], produce fits that make the lattice model time series almost indistinguishable from real financial market data. It seems that the most important conclusion derived from our study is that self-organized criticality, being a fundamental driving force for the model, is also key to characterizing real world financial markets. To say the least, self-organized criticality should be an important component of intrinsic market dynamics, allowing us to model financial instruments using lattice methods which may hopefully be competitive with current industry practice. Of course, self-organization is surely not the only mechanism that drives financial market dynamics. Among other things, trading occurs within a background of arbitrage opportunities [3]. We are looking forward to combining past studies focused on arbitrage [2] with the present model in order to develop an even more realistic stochastic market model.