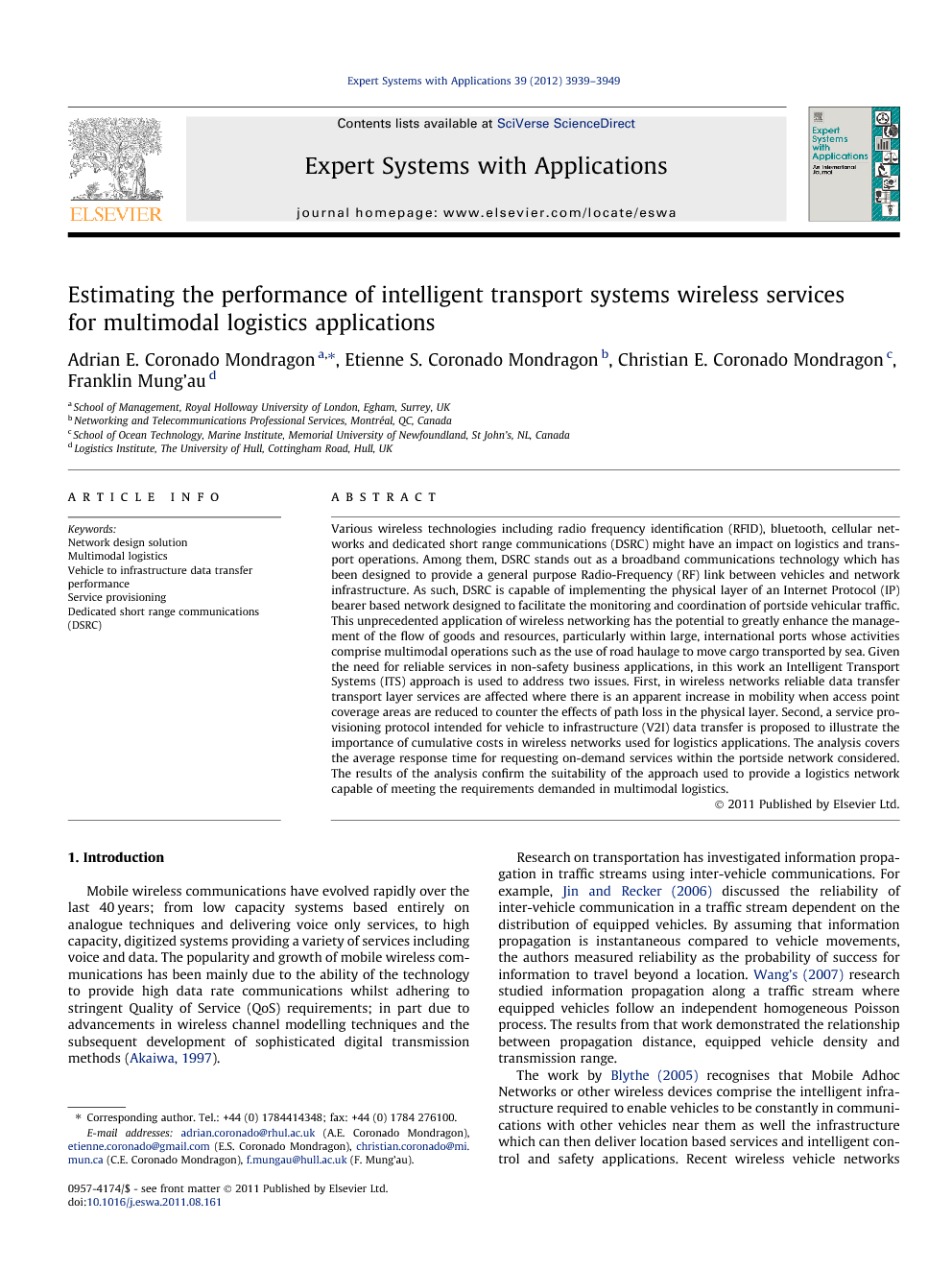 Various wireless technologies including radio frequency identification (RFID), bluetooth, cellular networks and dedicated short range communications (DSRC) might have an impact on logistics and transport operations. Among them, DSRC stands out as a broadband communications technology which has been designed to provide a general purpose Radio-Frequency (RF) link between vehicles and network infrastructure. As such, DSRC is capable of implementing the physical layer of an Internet Protocol (IP) bearer based network designed to facilitate the monitoring and coordination of portside vehicular traffic. This unprecedented application of wireless networking has the potential to greatly enhance the management of the flow of goods and resources, particularly within large, international ports whose activities comprise multimodal operations such as the use of road haulage to move cargo transported by sea. Given the need for reliable services in non-safety business applications, in this work an Intelligent Transport Systems (ITS) approach is used to address two issues. First, in wireless networks reliable data transfer transport layer services are affected where there is an apparent increase in mobility when access point coverage areas are reduced to counter the effects of path loss in the physical layer. Second, a service provisioning protocol intended for vehicle to infrastructure (V2I) data transfer is proposed to illustrate the importance of cumulative costs in wireless networks used for logistics applications. The analysis covers the average response time for requesting on-demand services within the portside network considered. The results of the analysis confirm the suitability of the approach used to provide a logistics network capable of meeting the requirements demanded in multimodal logistics.

This paper presents an analysis of reliable data transfer for IP based, DSRC communications network implemented for logistics purposes. The proposed network was designed and dimensioned to reduce the implementation costs and reduce the queuing delays when OSPF or IS-IS shortest path routing are implemented. The coverage area of 340 m used in the trials was perfectly adequate to run the simulation trials using OPNET®, as not only it was possible to fully cover the area of the port related to the tipping of bulk material but also to ensure a minimum of queuing delays. It was not only the feasibility of a DSRC communication network to provide full coverage for a geographical area but also the case presented in this paper shows that the deployment of DSRC communications as a portside network addresses a major concern regarding the need to provide robust and secure access to services where reliable delivery of information between vehicles and providers must be guaranteed. The on-demand service request exchange message protocol comprising security entities and a session manager evaluated the average response time for a user, in this case a truck, to request a secure session. The results from the simulations show that the average response time for on-demand requests during a typical work shift of 8 h is acceptable even when increasing the number of vehicles. Moreover, the experienced delays in the average task response time between having one truck and twenty was only 50 ms. These results are important as they can be used as the basis for the development of commercial roadside services which can be accessible, reliable and secure. The components of the on-demand services protocol used in this research have specific functions. For example, the purpose of the security module is to verify the certainty of the holder’s key certificates by using public and private certificate revocation lists. Additionally, the security module is responsible for generating the corresponding security attributes for both the requesting user, in this case the truck, and the solicited provider which in this paper is the port terminal. One of the main parts for service provisioning model deals with the implementation of session managers which are responsible for facilitating the transference of existing and valid session parameters to other session managers. Finally, on the question of the feasibility of DSRC for logistics, the capabilities of these networks have been demonstrated during the simulation whilst taking into account the prevailing wireless channel condition and despite a high degree of mobility of the haulage vehicles. Road haulage still represents the main mode of moving goods in many countries and the availability of services over wireless vehicle networks have the potential to make supply chains more efficient by enabling better track and trace of cargo, better fleet control, better route planning, close monitoring of emissions and truck usage among others. For example, the use of wireless vehicle networks will enable live updates to job and transport schedules based on the status of haulage vehicles or the secure exchange of data from digital tacographs.