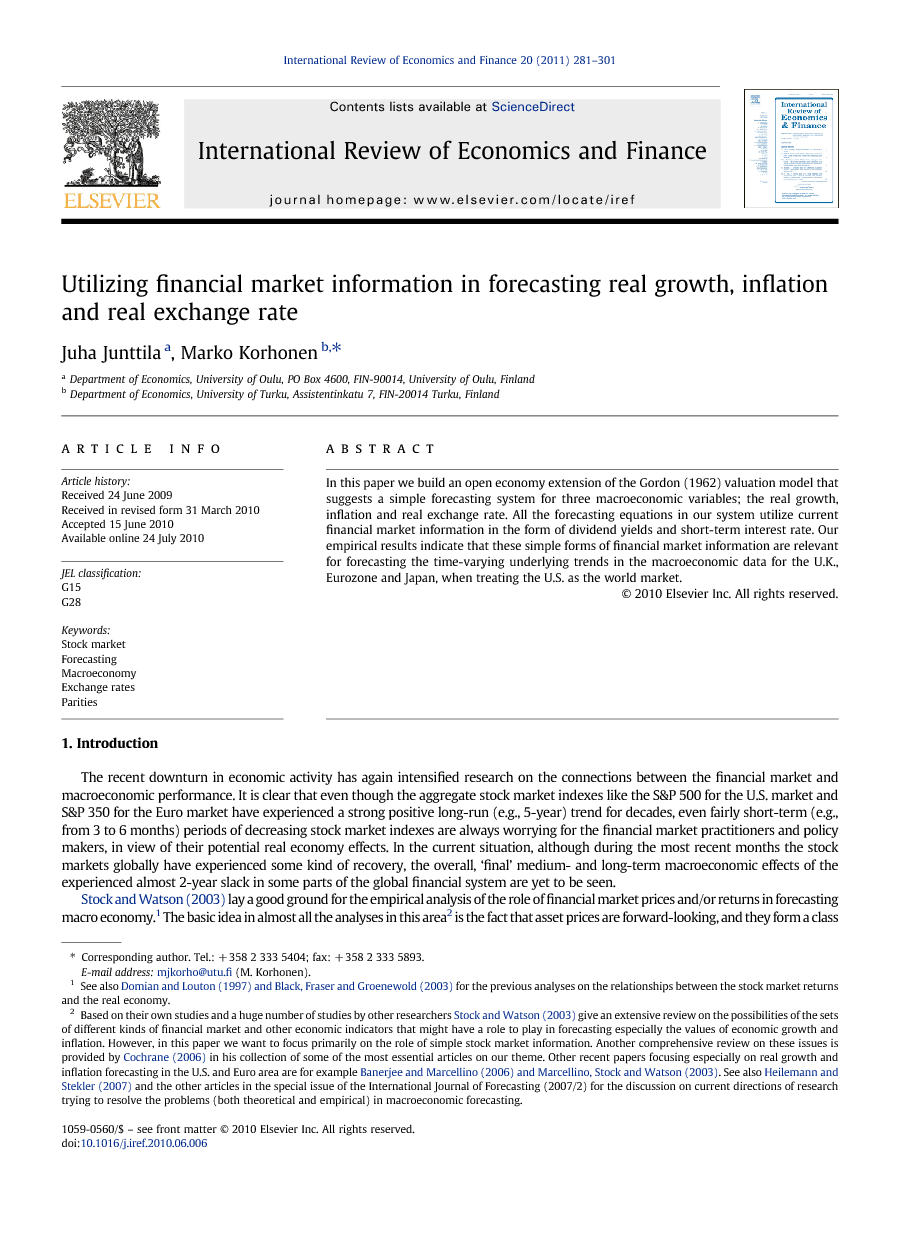 In this paper we build an open economy extension of the Gordon (1962) valuation model that suggests a simple forecasting system for three macroeconomic variables; the real growth, inflation and real exchange rate. All the forecasting equations in our system utilize current financial market information in the form of dividend yields and short-term interest rate. Our empirical results indicate that these simple forms of financial market information are relevant for forecasting the time-varying underlying trends in the macroeconomic data for the U.K., Eurozone and Japan, when treating the U.S. as the world market.

In this paper we have derived a system of forecasting equations rooted in fundamental long-run equilibrium relationships both for the macro economy and financial markets. The final form for our system of equations consists of a forecasting equation for real growth, inflation, and the real exchange rate. The main explanatory variables are the domestic dividend yield for real growth, the nominal interest rate and the domestic dividend yield for inflation, and the dividend yield spread against the world market for the real exchange rate. The empirical results from the U.K., Germany, Eurozone and Japan, treating the U.S. as the world market, show that the stock market dividend yield is a relevant information variable for forecasting the future values of the macro economy. The forecasting power shows up especially during turbulent time periods both in the macro economy and financial markets. This is a new result compared to many other studies regarding the role of dividend yield as an informative variable. Previous studies have suggested that the dividend–price ratio is more able to approximate the expected (or unexpected) stock returns, but our results are favorable for using the dividend yield as an actual forecasting variable for future macro economy. Furthermore, when using our system of equations the financial markets' ability to forecast the time-varying underlying trends even in the longer horizon (like 2 years ahead) macro values is obvious, especially during periods of frequent changes in the time-varying trends of the future values of the macro economy. Hence, according to our results, the inclusion of stock market performance data in some form or the other would seem to be highly recommendable when building even small scale macroeconomic forecasting systems. All our equations, estimation procedures etc. are based on linear specifications, so the somewhat mixed findings especially on the forecasting ability of the dividend yield spread for future values of real exchange rate might call for more advanced empirical and theoretical analyses, which might for example reveal nonlinearities in the actual data and/or in the relationships between the analyzed financial market and macroeconomic variables. However, because the forecast ability for real economic activity and inflation seems somewhat strong already based on simple linear techniques, the various possibilities for applying nonlinear tools will be left to future work.