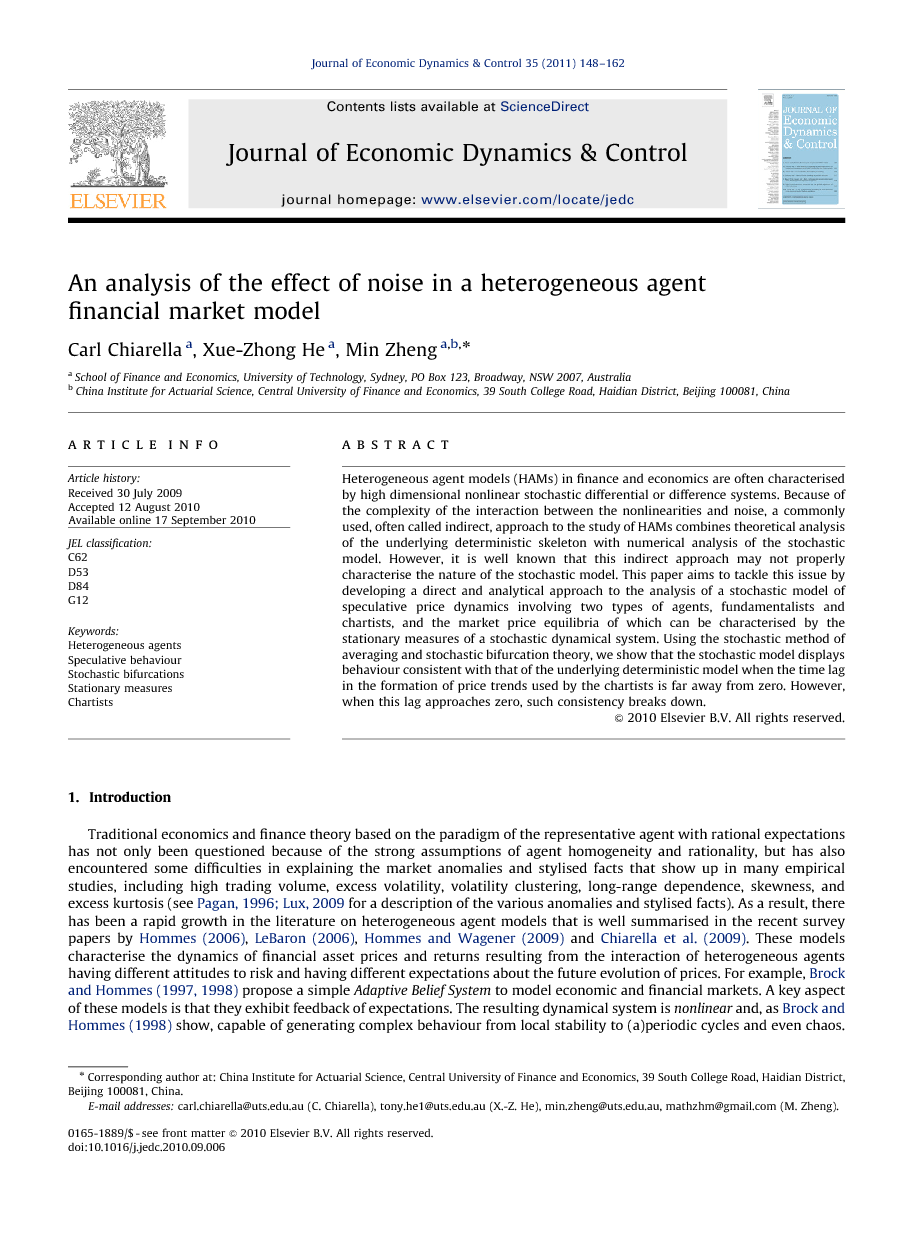 Heterogeneous agent models (HAMs) in finance and economics are often characterised by high dimensional nonlinear stochastic differential or difference systems. Because of the complexity of the interaction between the nonlinearities and noise, a commonly used, often called indirect, approach to the study of HAMs combines theoretical analysis of the underlying deterministic skeleton with numerical analysis of the stochastic model. However, it is well known that this indirect approach may not properly characterise the nature of the stochastic model. This paper aims to tackle this issue by developing a direct and analytical approach to the analysis of a stochastic model of speculative price dynamics involving two types of agents, fundamentalists and chartists, and the market price equilibria of which can be characterised by the stationary measures of a stochastic dynamical system. Using the stochastic method of averaging and stochastic bifurcation theory, we show that the stochastic model displays behaviour consistent with that of the underlying deterministic model when the time lag in the formation of price trends used by the chartists is far away from zero. However, when this lag approaches zero, such consistency breaks down.

In this paper, within the framework of the heterogeneous agent paradigm, we extend the basic deterministic model of Beja and Goldman (1980) and Chiarella (1992) to a stochastic model for the market price, and examine the consistency of the stochastic dynamics under the indirect and direct approaches. By using P-bifurcation analysis, we examine the qualitative changes of the stationary measures of the stochastic model. For the simple stochastic financial market model studied here, when the time lag used by the chartists to form their expected price trends is not zero, we show that near the steady state of the underlying deterministic model, the approximation of the stochastic model shares the corresponding Hopf bifurcation dynamics of the deterministic model. When the time lag used by the chartists to form their expected price changes approaches zero, so that the chartists are placing more and more weight on recent price changes, then the system can have singular points. In this case, the stochastic model displays very different dynamics from those of the underlying deterministic model. In particular, the fundamental noise can destabilise the market equilibrium and result in a change of the stationary distribution through a P-bifurcation of the stochastic model, while the corresponding deterministic model displays no bifurcation. Our results demonstrate the important connection, but also the significant difference, of the dynamics between deterministic and stochastic models. This difference comes from the existence of noise and the fact that it increases market volatility, a feature which cannot be captured by a deterministic model. Economically, we have considered a very simple financial market model with heterogeneous agents. This stylised model and the role played by the chartists are shared by many heterogeneous agent-based discrete-time models in recent literature. However, rigorous analysis and theoretical understanding of the stochastic behaviour underlying this intuition are important to policy analysis, investment strategies and market design, but have drawn less attention, mainly due to the difficult nature of these issues. Ultimately we need to apply the theory of stochastic bifurcation directly rather than simulate the models indirectly. Applications of the tools and concepts of stochastic bifurcation theory to financial market models to obtain some analytical insight into this intuition and to improve our understanding about the interaction of the behaviour of heterogeneous agents and noise are the main contributions of this paper. In order to bring out the basic phenomena associated with stochastic bifurcation we have focused on a highly simplified model. The simplicity of the model limits its ability to generate the stylised facts observed in financial markets. In order to do so the model would need to be embellished in a number of ways in future research, in particular: deriving the asset demands of agents from an intertemporal optimisation framework; introducing other types of randomness such as market noise to characterise excess volatility; allowing for switching of strategies according to some fitness measure (see for example Brock and Hommes, 1997 and Brock and Hommes, 1998); and analysing in closer detail the stochastic dynamics to replicate the stylised facts and power-law behaviour observed in real market data.