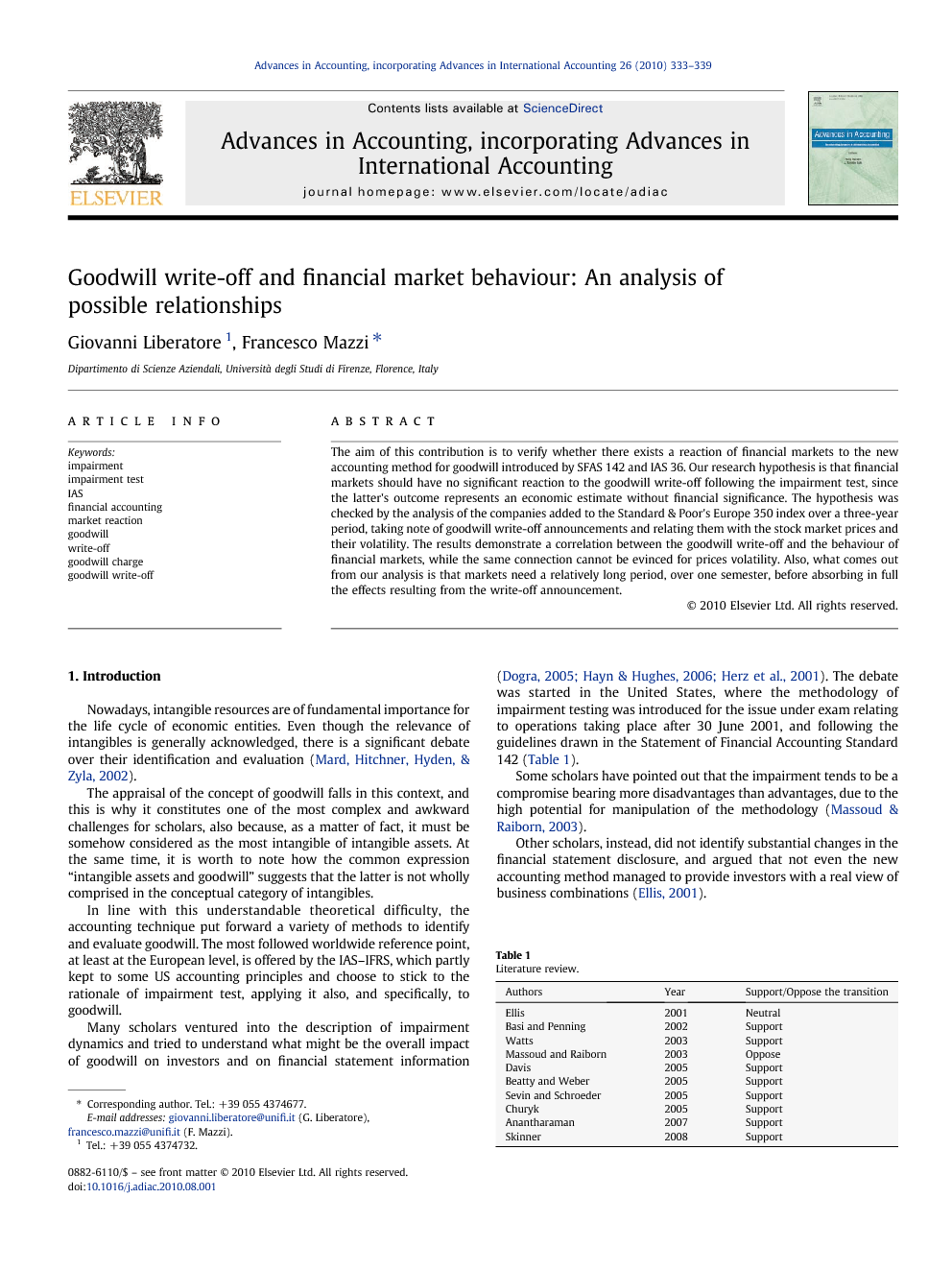 The aim of this contribution is to verify whether there exists a reaction of financial markets to the new accounting method for goodwill introduced by SFAS 142 and IAS 36. Our research hypothesis is that financial markets should have no significant reaction to the goodwill write-off following the impairment test, since the latter's outcome represents an economic estimate without financial significance. The hypothesis was checked by the analysis of the companies added to the Standard & Poor's Europe 350 index over a three-year period, taking note of goodwill write-off announcements and relating them with the stock market prices and their volatility. The results demonstrate a correlation between the goodwill write-off and the behaviour of financial markets, while the same connection cannot be evinced for prices volatility. Also, what comes out from our analysis is that markets need a relatively long period, over one semester, before absorbing in full the effects resulting from the write-off announcement.

Nowadays, intangible resources are of fundamental importance for the life cycle of economic entities. Even though the relevance of intangibles is generally acknowledged, there is a significant debate over their identification and evaluation (Mard, Hitchner, Hyden, & Zyla, 2002). The appraisal of the concept of goodwill falls in this context, and this is why it constitutes one of the most complex and awkward challenges for scholars, also because, as a matter of fact, it must be somehow considered as the most intangible of intangible assets. At the same time, it is worth to note how the common expression “intangible assets and goodwill” suggests that the latter is not wholly comprised in the conceptual category of intangibles. In line with this understandable theoretical difficulty, the accounting technique put forward a variety of methods to identify and evaluate goodwill. The most followed worldwide reference point, at least at the European level, is offered by the IAS–IFRS, which partly kept to some US accounting principles and choose to stick to the rationale of impairment test, applying it also, and specifically, to goodwill. Many scholars ventured into the description of impairment dynamics and tried to understand what might be the overall impact of goodwill on investors and on financial statement information (Dogra, 2005, Hayn & Hughes, 2006 and Herz et al., 2001). The debate was started in the United States, where the methodology of impairment testing was introduced for the issue under exam relating to operations taking place after 30 June 2001, and following the guidelines drawn in the Statement of Financial Accounting Standard 142 (Table 1). Table 1. Literature review. Authors Year Support/Oppose the transition Ellis 2001 Neutral Basi and Penning 2002 Support Watts 2003 Support Massoud and Raiborn 2003 Oppose Davis 2005 Support Beatty and Weber 2005 Support Sevin and Schroeder 2005 Support Churyk 2005 Support Anantharaman 2007 Support Skinner 2008 Support Table options Some scholars have pointed out that the impairment tends to be a compromise bearing more disadvantages than advantages, due to the high potential for manipulation of the methodology (Massoud & Raiborn, 2003). Other scholars, instead, did not identify substantial changes in the financial statement disclosure, and argued that not even the new accounting method managed to provide investors with a real view of business combinations (Ellis, 2001). However, the majority of studies remarked an improvement in the quality of information. Other experts have adopted a positive approach toward transition and followed the evidence that had already been provided in literature before the introduction of the impairment test (Elliot & Shaw, 1988 and Francis et al., 1996). In spite of this positive approach, they maintained that the quality of the operating result might be somehow invalidated because of the discretion of the impairment procedures (Basi & Penning, 2002, Davis, 2005 and Sevin & Schroeder, 2005). In fact, attention was frequently called to the discretion allowed to financial accountants, that might sometimes lead to give preference to so-called “above the line” values and thus avoid writing-off at critical times for the firm's life (Beatty & Weber, 2006, Watts, 2003a and Watts, 2003b). Some scholars point to the improvement of the financial statement disclosure obtained with the introduction of the impairment test, due to this device's capability to reflect the volatility properties of the intangible resources embedded in goodwill (Anantharaman, 2007, Churyk, 2005 and Skinner, 2008). Although, as already stated above, the issue of financial markets' reaction to write-off announcements has been already examined in literature (see, for a general overview, Bartov, Lindhal, & Ricks, 1998), the studies specifically related to announcements of goodwill write-offs are relatively few. An analysis carried out for the US market highlighted a sensitivity of investors to goodwill write-offs caused by impairment testing (Hirschey & Richardson, 2003). Certainly, we believe the association between goodwill write-off announcements and market reactions constitute an interesting ground for the European market as well.

Defining and estimating goodwill are issues that business economists have been tackling for more than one century now, offering many definitions and recommending several estimation and accounting methods. The IAS–IFRS constitute a system for connecting a company's financial statement with the information available to market operators: they too have tackled the issue of goodwill estimation, whose application field is made up of thousands of companies and deciphered by millions of investors. The question we asked in this work was whether it might be said to exist a correlation between IAS–IFRS goodwill write-offs and the trend of financial markets, in the hypothesis that these only react to financial impulses and not to accounting impulses, among which goodwill write-offs can be mentioned. The empirical analysis, carried out using a sample of 350 companies over a three-year period, demonstrated that there is no such thing as straight indifference of markets to the event under exam. In fact, following a goodwill write-off, what happens is that: • markets show sensitivity to the event under study; • such sensitivity can be explained by the relevance market operators ascribe to the write-off announcement and this behaviour is proved by the fact that companies that underwent this procedure presents a higher number of anomalous ΔCAR; • the number of anomalous ΔCARs increases up till the first 150 days following the announcement and is then reabsorbed in the space of the 250 days succeeding the event; • there is a slight prevalence of positive reactions, which means that market operators have probably overrated the loss in the goodwill value compared to the one announced and currently contained in the accounting documents; • goodwill write-offs do not imply a higher degree of uncertainty, since the stock volatility is lined up with the market volatility. The anomalous reaction of financial markets to goodwill write-offs is a kind of behaviour to question by far and in the long run, on both a practical and a theoretical level. Also, although data are not completely exhaustive on this point, it might be useful to investigate over the existence of a tendency for historical series of prices following a goodwill write-off to distribute more frequently among positive outliers. The issue seems to deserve manifold explanations, and further investigations are needed to dig deeper into it. Among the possible reasons behind this sort of analysis, we mention the following ones: • The information in the Notes to Financial Statement might not be, at present, sufficient to wipe out doubts about goodwill and its write-off. In particular, once the goodwill is accounted, no further information is required as to the portion actually preserved from the acquired goodwill, and the portion that might be internally developed, or at least derived from the new management's particular ability at maintaining the company. To this purpose, it might also be useful to provide information about the internal goodwill of the firm, as it would give market agents an exhaustive information. • The order laid down in the international accounting principles insists on a series of information about goodwill that the Notes to Financial Statement should provide. In contrast, while carrying out the analysis, we noted some deficiencies on this point: the companies under exam usually restrained from giving details in the exposition of data (estimation method used for fair values, statement of prospective cash flows, expected hurdle rate, and so on) and only made quite general and speculative considerations about them. A more in-depth and accurate information, along with practical details might prove a useful tool for any reader to better understand financial statements. • The information concerning goodwill is perceived by operators as a sort of alarm bell, which makes them aware of the need to revise their own evaluation and opinion of a particular firm. This might even explain a benchmark-inconsistent performance of stocks following a write-off. From what we observed, it seems desirable that academics should provide some contributions on questions such as: • if the write-off announcement has a milder effect for companies with a higher quality set of information about the process of goodwill impairment test; • if behaviours depend on exogenous factors, like the kind of market, the geographical area and the sectors of activity, or endogenous factors, like replacements in the top management; • if the reaction is apt to get stronger or weaker at times of slump for the global economy; • if the effects can be associated to the reasons officially given for the goodwill write-off.