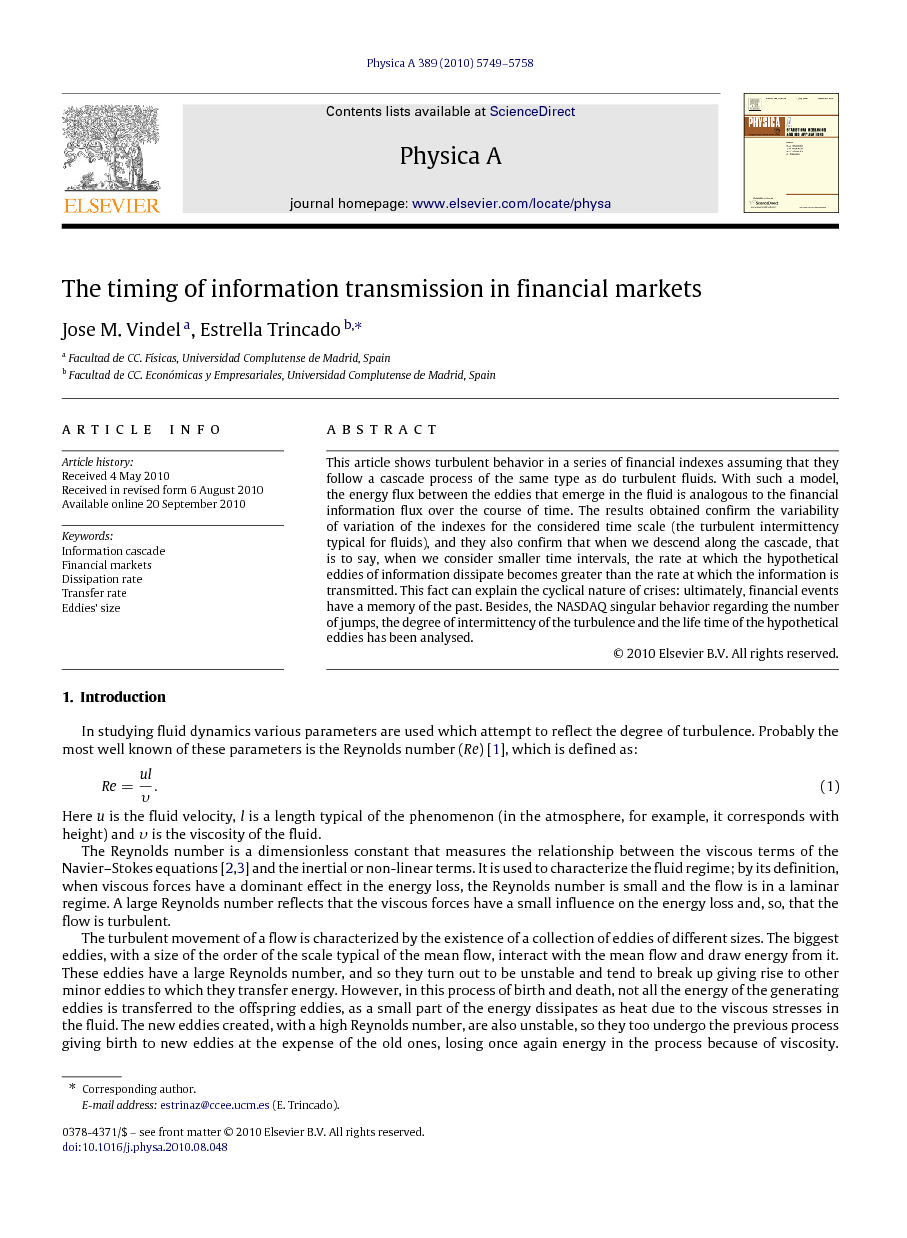 This article shows turbulent behavior in a series of financial indexes assuming that they follow a cascade process of the same type as do turbulent fluids. With such a model, the energy flux between the eddies that emerge in the fluid is analogous to the financial information flux over the course of time. The results obtained confirm the variability of variation of the indexes for the considered time scale (the turbulent intermittency typical for fluids), and they also confirm that when we descend along the cascade, that is to say, when we consider smaller time intervals, the rate at which the hypothetical eddies of information dissipate becomes greater than the rate at which the information is transmitted. This fact can explain the cyclical nature of crises: ultimately, financial events have a memory of the past. Besides, the NASDAQ singular behavior regarding the number of jumps, the degree of intermittency of the turbulence and the life time of the hypothetical eddies has been analysed.

In studying fluid dynamics various parameters are used which attempt to reflect the degree of turbulence. Probably the most well known of these parameters is the Reynolds number (ReRe) [1], which is defined as: equation(1) View the MathML sourceRe=ulυ. Turn MathJax on Here uu is the fluid velocity, ll is a length typical of the phenomenon (in the atmosphere, for example, it corresponds with height) and υυ is the viscosity of the fluid. The Reynolds number is a dimensionless constant that measures the relationship between the viscous terms of the Navier–Stokes equations [2] and [3] and the inertial or non-linear terms. It is used to characterize the fluid regime; by its definition, when viscous forces have a dominant effect in the energy loss, the Reynolds number is small and the flow is in a laminar regime. A large Reynolds number reflects that the viscous forces have a small influence on the energy loss and, so, that the flow is turbulent. The turbulent movement of a flow is characterized by the existence of a collection of eddies of different sizes. The biggest eddies, with a size of the order of the scale typical of the mean flow, interact with the mean flow and draw energy from it. These eddies have a large Reynolds number, and so they turn out to be unstable and tend to break up giving rise to other minor eddies to which they transfer energy. However, in this process of birth and death, not all the energy of the generating eddies is transferred to the offspring eddies, as a small part of the energy dissipates as heat due to the viscous stresses in the fluid. The new eddies created, with a high Reynolds number, are also unstable, so they too undergo the previous process giving birth to new eddies at the expense of the old ones, losing once again energy in the process because of viscosity. The process repeats itself successively until the eddies created have a Reynolds number low enough so as to not be unstable and consequently to not decompose into minor eddies. These minor eddies only turn into heat because of the viscous forces. Each of these transitions of bigger eddies to smaller eddies, that we can interpret as a step of the energetic cascade [4], corresponds to a scale (spatial, ll, or temporal, ττ). The spatial scale is the size of the corresponding eddies at that step (and the temporal scale is the product of the spatial scale by the mean flow, assuming the Taylor hypothesis [5]). We can consider for each of the scales of the cascade the values of different variables. So, for example, the velocity (ul)(ul) at a certain scale ll corresponds to the difference between the velocity of two points separated by that distance. That is to say: equation(2) ul=u(x+l)−u(x).ul=u(x+l)−u(x). Turn MathJax on Knowing the velocity at a certain scale makes it possible to know diverse variables at this scale, such as the Reynolds number, the time necessary for rotation of the eddies, View the MathML sourcetlrot, or the time necessary for the dissipation of these eddies at that scale, View the MathML sourcetldis. View the MathML sourcetlrotmay be interpreted as the time necessary for the full transfer of the kinetic energy of the eddy of diameter ll to those with lesser diameter that emerge from it. That is to say, it corresponds with the lifetime of the eddy. It may be calculated through the following expression [6]: equation(3) View the MathML sourcetlrot=lul. Turn MathJax on As regards to the time necessary for the energy of an eddy to dissipate as heat, it will increase with the size of the eddy and it will decrease with the increase of the viscosity of the fluid. In particular [6]: equation(4) View the MathML sourcetldis∝l2υ. Turn MathJax on According to the two former expressions, the relation between both times will be inversely proportional to the Reynolds number corresponding to the scale in question: equation(5) View the MathML sourcetlrottldis∝lυull2=1Rel. Turn MathJax on When View the MathML sourcetlrot≪tldis, then eddies have the time to transfer all their energy to the smallest eddies (the dissipative effect is negligible). In the opposite case, the energy of the eddies dissipates before they have the time to transfer their energy to the subsequent ones. In the first case, we are in the so-called inertial subrange, in the second, in the dissipative range. From the previously described variables, it is possible to know both the kinetic energy transferred per unit of time (and unit mass) by the eddies of one scale, ll, to those of the next scale, TlTl, and the energy dissipation rate at that scale, DlDl: equation(6) View the MathML sourceTl=ul22tlrot∝ul2tlrot=ul3l. Turn MathJax on With regard to DlDl: equation(7) View the MathML sourceDl=ul22tldis∝υul2l2. Turn MathJax on The relationship between the two flux will be: equation(8) View the MathML sourceTlDl∝ul3l−1υul2l−2=ullυ=Rel. Turn MathJax on That is to say, this ratio is proportional to the Reynolds number associated with the scale in question and, according to (5), it is inversely proportional to the relation between the time necessary for rotation and the time necessary for dissipation. Therefore, as we have explained, the turbulent cascade consists of an energy transfer across different scales. This translates into behavior of the characteristic parameters at those scales that can be variable (or not); if there is variability, one speaks of the intermittency of the turbulence [7], [8] and [9]. A way of determining the intermittency consists of estimating the modification of the probability density functions (PDFs) of the increments of velocity when the eddies’ scales change [10], [11], [12] and [13]; another possible way is to observe the evolution of flatness (that characterizes the sharpness of the PDF) with the scale [14] and [15].

Due to the type of data available for study, we only have temporal scales, so we should estimate the size of the hypothetical turbulent eddies using the so-called Taylor hypothesis, according to which it is possible to estimate the spatial scale by multiplying the mean flow by the temporal scale. However in this type of data we do not have this flow, and thus we will simply have to use for our calculations the association (a direct relationship) between both types of scale. Firstly, in Fig. 1, the temporal evolution of the indexes used for the study has been represented; in order to reduce the usual lack of stationarity of the market data, the trend of the original datasets has been eliminated. This figure shows very clearly the presence of jumps in the different indexes. Jumps represent great increases (or decreases) of the indexes, which can be associated to explosive informations that affect the index in the short term. Therefore, these jumps usually appear at small time scales and their presence is associated to sporadic and rare events: if those events became usual, then the market would foresee their appearance, making them less explosive. These kind of rare events are due to common knowledge, like prescheduled earnings announcements and other company-specific news events, and they drive indexes up or down with little changes in business volume. Actually, compared to a normal day, the volume on days with common-knowledge driven jumps should be smaller. When seeing a jump or large price movements, it is reasonable to assume that people might stop their trading activities to reevaluate their investing options [27]. Besides, if, for example, all the agents learn that the prices of a good have gone up in the past hour, everybody would immediately value higher their producers’ stock, without the need to trade; so the price immediately “jumps” up without any change in volume. According to this, trading happens when there is asymmetric information and one trader starts to buy or sell stock because he feels that it is relatively cheaper or dearer.