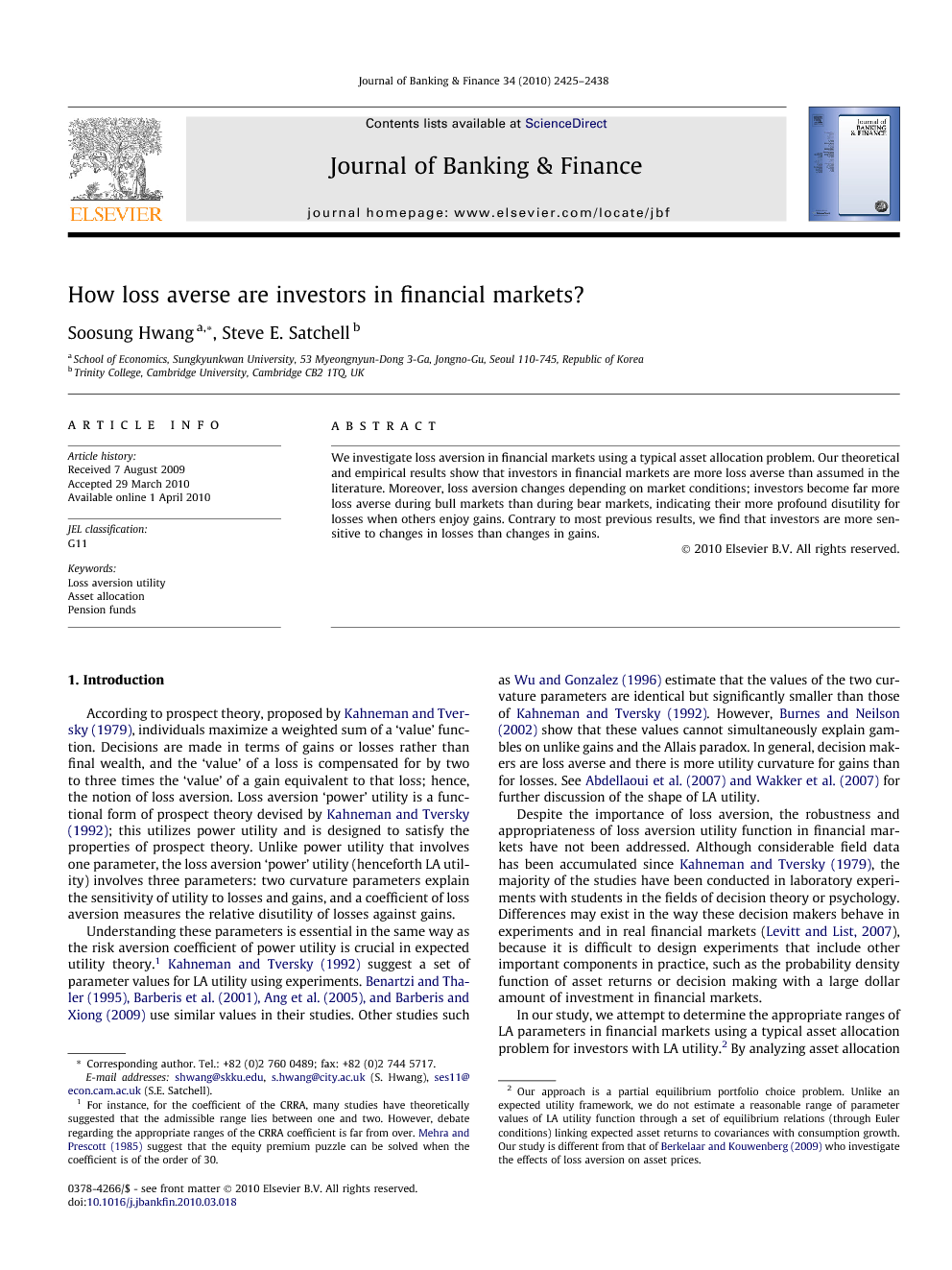 We investigate loss aversion in financial markets using a typical asset allocation problem. Our theoretical and empirical results show that investors in financial markets are more loss averse than assumed in the literature. Moreover, loss aversion changes depending on market conditions; investors become far more loss averse during bull markets than during bear markets, indicating their more profound disutility for losses when others enjoy gains. Contrary to most previous results, we find that investors are more sensitive to changes in losses than changes in gains.

According to prospect theory, proposed by Kahneman and Tversky (1979), individuals maximize a weighted sum of a ‘value’ function. Decisions are made in terms of gains or losses rather than final wealth, and the ‘value’ of a loss is compensated for by two to three times the ‘value’ of a gain equivalent to that loss; hence, the notion of loss aversion. Loss aversion ‘power’ utility is a functional form of prospect theory devised by Kahneman and Tversky (1992); this utilizes power utility and is designed to satisfy the properties of prospect theory. Unlike power utility that involves one parameter, the loss aversion ‘power’ utility (henceforth LA utility) involves three parameters: two curvature parameters explain the sensitivity of utility to losses and gains, and a coefficient of loss aversion measures the relative disutility of losses against gains. Understanding these parameters is essential in the same way as the risk aversion coefficient of power utility is crucial in expected utility theory.1Kahneman and Tversky (1992) suggest a set of parameter values for LA utility using experiments. Benartzi and Thaler, 1995, Barberis et al., 2001, Ang et al., 2005 and Barberis and Xiong, 2009 use similar values in their studies. Other studies such as Wu and Gonzalez (1996) estimate that the values of the two curvature parameters are identical but significantly smaller than those of Kahneman and Tversky (1992). However, Burnes and Neilson (2002) show that these values cannot simultaneously explain gambles on unlike gains and the Allais paradox. In general, decision makers are loss averse and there is more utility curvature for gains than for losses. See Abdellaoui et al., 2007 and Wakker et al., 2007 for further discussion of the shape of LA utility. Despite the importance of loss aversion, the robustness and appropriateness of loss aversion utility function in financial markets have not been addressed. Although considerable field data has been accumulated since Kahneman and Tversky (1979), the majority of the studies have been conducted in laboratory experiments with students in the fields of decision theory or psychology. Differences may exist in the way these decision makers behave in experiments and in real financial markets (Levitt and List, 2007), because it is difficult to design experiments that include other important components in practice, such as the probability density function of asset returns or decision making with a large dollar amount of investment in financial markets. In our study, we attempt to determine the appropriate ranges of LA parameters in financial markets using a typical asset allocation problem for investors with LA utility.2 By analyzing asset allocation decisions of investors who maximize their LA utility, we propose several theoretical results for the LA utility function and the optimal asset allocation, and then show that these analytical results are empirically supported in the US and UK markets. Our main results can be summarized as follows. First, we find that investors are more loss averse than Kahneman and Tversky (1992) suggest; the loss aversion coefficient of 2.25 that has been widely used in the finance literature is lower than what we calculate, in particular, in the US market. This may be interpreted that when investors choose risky prospects that involve large amounts, they become more loss averse than the subjects (students) in laboratory experiments who are asked to choose risky prospects that are smaller in dollar amount or who are asked to choose risky prospects of large amounts in hypothetical situations. Second, loss aversion changes depending on market conditions. In particular, we find that the loss aversion coefficient should be larger during boom periods (bull markets) than during recessions (bear markets), indicating investors’ more profound disutility for losses when other investors enjoy their gains. The time variation of loss aversion adds a new dimension to the loss aversion literature, which is already hindered by many different versions of loss aversion (see, for example, Abdellaoui et al., 2007). Third, the curvature on losses should be larger than that of gains, and thus investors are more sensitive to the changes in losses than to the equivalent changes in gains. More utility curvature for losses than for gains is surprising because mostly the opposite is found; see Note 1, Wakker et al. (2007) for a survey. Finally, when UK and US investors are compared, the equity proportion in the typical US pension funds is lower than that in similar UK funds. If we make the simplistic assumption that the loss aversion coefficient is the sole source of the different equity proportions in pension funds, the lower investment proportion in the US pension funds could be interpreted that US investors have a larger loss aversion coefficient than UK investors. However, this does not necessarily suggest that US investors are more loss averse than UK investors, as the loss aversion coefficient could be affected by the differences other than loss aversion, e.g., difference in asset distributions, social/economic welfare, or characters of pension funds. What parameter values should be used for the LA utility in financial markets? We propose loss aversion coefficients of 3.25 and 2.75 for the US and UK investors, respectively, which should be increased and reduced by 1.5 during bull and bear markets, respectively; and the difference between the two curvature parameters should be 0.2 and 0.25 for the US and UK markets, respectively. Therefore, for investors who are risk averse for gains and risk loving for losses, we suggest that the curvature parameters of the UK investors should be 0.7 and 0.95 for gains and losses, respectively, while those of the US investors should be 0.7 and 0.9 for gains and losses, respectively. This paper is structured as follows: in Section 2, we present the details of the LA utility and our principal analytic results. In Section 3, we use UK and US asset allocation problems to empirically evaluate the values of LA parameters. Conclusions are provided in Section 4.

In this study, we investigate the LA utility function in financial markets using the asset allocation problem. Despite the criticism raised by Köbberling and Wakker (2005), the two-side power function is used extensively to analyze loss aversion. We first develop several theoretical results that provide conditions that should be satisfied by the parameters of the LA utility function. We demonstrate that the curvature for the losses (v2) should be larger than that for the gains (v1). We also show that the optimal investment proportion on the performance portfolio increases with v2 − v1, but decreases with λ in the loss aversion world. Finally, a lower bound for the loss aversion coefficient is suggested and is demonstrated to change significantly over bull and bear markets. This may reflect changing composition of the representative agents in different markets. These analytical results are supported by the results of empirical tests. Our results demonstrate that v2 is larger than v1 by 0.25 for the UK market and by 0.2 for the US market, and the conventional loss aversion coefficient, i.e., 2.25, falls within the admissible ranges but is close to the lower bound. For Kahneman and Tversky’s (1992) loss aversion coefficient, we suggest 3.25 and 2.75 in the US and UK markets, respectively, which requires adjustment to explain the relative effect. There are a few issues that we would like to address. The parameter values estimated from observed macro aggregates are not necessarily comparable to those calculated through the analysis of experimental data. This is because, in addition to the difference between experiments and practice discussed above, the experimental tests often have repeated game structure, whereas the investor in this paper faces a static optimization. However, our main results should still hold for the dynamic loss aversion function proposed by Barberis et al. (2001). Allowing loss aversion to depend on past gains and losses should not change our main results that loss aversion increases during bull markets. Intuitively, the regret and house money effects from past losses and gains differ from the relative effects that investors feel by comparing others’ performance. The multi-period analysis, being more complex, would not be amenable to the same approach we employ in this paper. This is because gains and losses are path-dependent in the multi-period analysis and cannot be simply reduced to analysis of one period. A full extension to a dynamic LA utility function could be envisaged, which we leave for future study. Finally, in our study, we assume, as is common in asset allocation problems, that there are two hypothetical asset classes: one performance portfolio, and the other benchmark portfolio. Three different methods have been proposed for the construction of these portfolios, and then tested. It appears probable that the selection of a different benchmark will yield different attitudes to risk; under-performing cash is qualitatively different from an under-performing peer-group. Extensions to the case of multiple asset classes would require more complex methods and analytic solutions might no longer be available without more specific assumptions regarding the form of multi-asset utility.