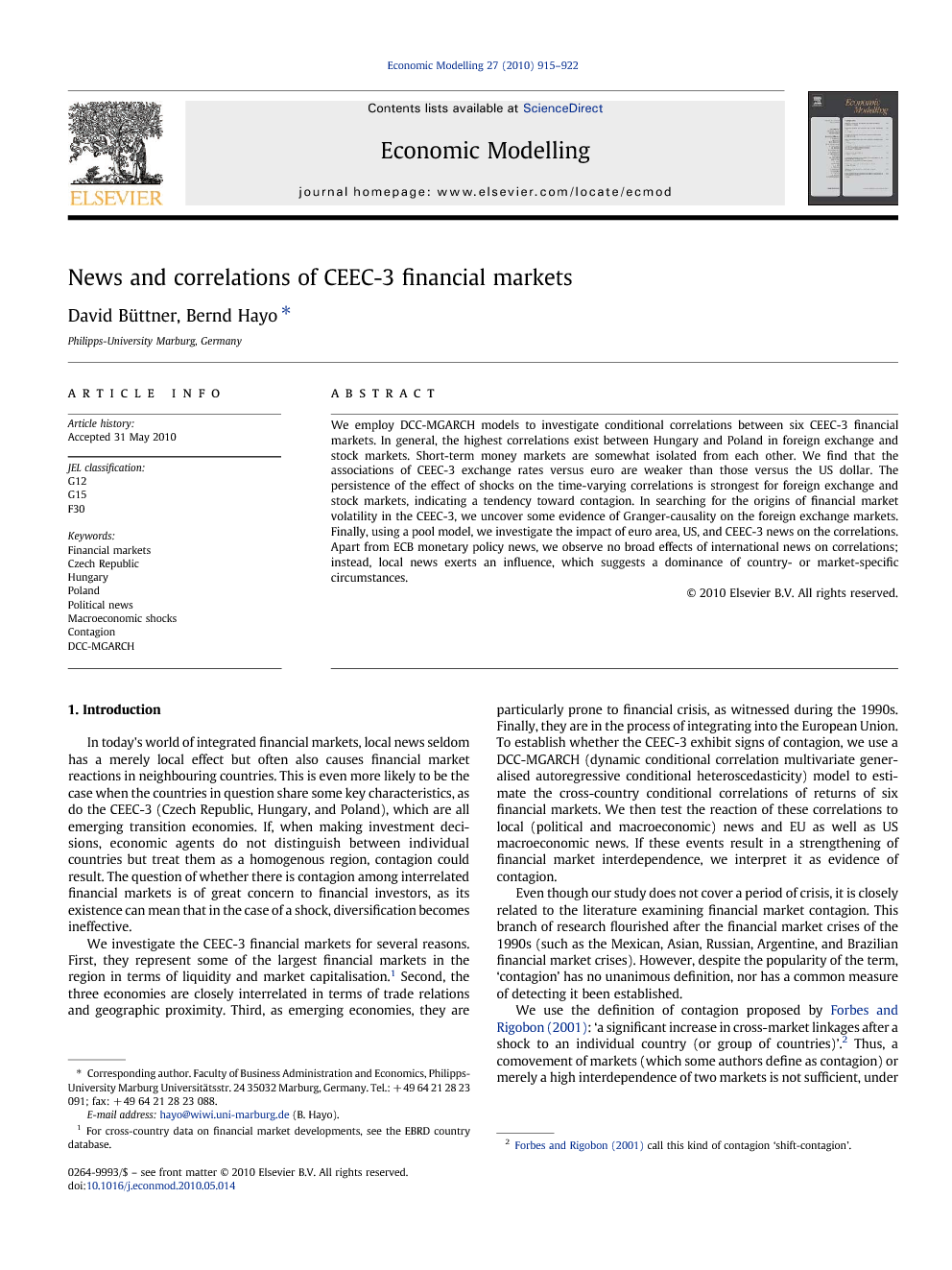 We employ DCC-MGARCH models to investigate conditional correlations between six CEEC-3 financial markets. In general, the highest correlations exist between Hungary and Poland in foreign exchange and stock markets. Short-term money markets are somewhat isolated from each other. We find that the associations of CEEC-3 exchange rates versus euro are weaker than those versus the US dollar. The persistence of the effect of shocks on the time-varying correlations is strongest for foreign exchange and stock markets, indicating a tendency toward contagion. In searching for the origins of financial market volatility in the CEEC-3, we uncover some evidence of Granger-causality on the foreign exchange markets. Finally, using a pool model, we investigate the impact of euro area, US, and CEEC-3 news on the correlations. Apart from ECB monetary policy news, we observe no broad effects of international news on correlations; instead, local news exerts an influence, which suggests a dominance of country- or market-specific circumstances.

In today's world of integrated financial markets, local news seldom has a merely local effect but often also causes financial market reactions in neighbouring countries. This is even more likely to be the case when the countries in question share some key characteristics, as do the CEEC-3 (Czech Republic, Hungary, and Poland), which are all emerging transition economies. If, when making investment decisions, economic agents do not distinguish between individual countries but treat them as a homogenous region, contagion could result. The question of whether there is contagion among interrelated financial markets is of great concern to financial investors, as its existence can mean that in the case of a shock, diversification becomes ineffective. We investigate the CEEC-3 financial markets for several reasons. First, they represent some of the largest financial markets in the region in terms of liquidity and market capitalisation.1 Second, the three economies are closely interrelated in terms of trade relations and geographic proximity. Third, as emerging economies, they are particularly prone to financial crisis, as witnessed during the 1990s. Finally, they are in the process of integrating into the European Union. To establish whether the CEEC-3 exhibit signs of contagion, we use a DCC-MGARCH (dynamic conditional correlation multivariate generalised autoregressive conditional heteroscedasticity) model to estimate the cross-country conditional correlations of returns of six financial markets. We then test the reaction of these correlations to local (political and macroeconomic) news and EU as well as US macroeconomic news. If these events result in a strengthening of financial market interdependence, we interpret it as evidence of contagion. Even though our study does not cover a period of crisis, it is closely related to the literature examining financial market contagion. This branch of research flourished after the financial market crises of the 1990s (such as the Mexican, Asian, Russian, Argentine, and Brazilian financial market crises). However, despite the popularity of the term, ‘contagion’ has no unanimous definition, nor has a common measure of detecting it been established. We use the definition of contagion proposed by Forbes and Rigobon (2001): ‘a significant increase in cross-market linkages after a shock to an individual country (or group of countries)’.2 Thus, a comovement of markets (which some authors define as contagion) or merely a high interdependence of two markets is not sufficient, under our definition, to constitute contagion.3 Contagion has also been defined as an increase in the probability of a crisis in one country given a crisis in another country (Eichengreen et al., 1996). To empirically detect instances of contagion, two main approaches are employed. The first approach is related to the Eichengreen et al.'s (1996) definition and consists of investigating whether the likelihood of a crisis in one country depends on local fundamentals, events in another country, or some common factors shared by these countries (e.g., Haile and Pozo, 2008, Fazio, 2007 and Eichengreen et al., 1996). The second approach is based on the Forbes and Rigobon (2001) definition of contagion and empirically examines the developments of cross-country correlation coefficients between financial markets. The studies in this branch of the literature examine cross-country correlation coefficients during periods of crisis and/or they estimate the impact of a specific type of event (not necessarily during a time of crisis) on their development (e.g., Chiang et al., 2007). There are several channels through which contagion can occur but, again, no consensus as to what these channels are.4 Three of the most important (and agreed upon) channels are the following (see also Didier et al., 2008 and Fazio, 2007). First, a financial crisis can be transmitted via trade (Glick and Rose, 1999). Thus, increased trade integration makes countries vulnerable to contagion. Second, contagion can be caused by financial markets themselves. This might arise when international investors (‘common creditors’) withdraw their investments from several financial markets (Fazio, 2007 and Pesenti and Tille, 2000).5 Another important aspect of this channel for emerging markets is that financial investors might treat seemingly similar countries as equal due to a lack of information (Didier et al., 2008).6 Third, similar macroeconomic weaknesses in different countries may imply that all countries will be treated the same if one of them faces a crisis (Fazio, 2007). We examine the impact of specific local (political and macroeconomic) and international macroeconomic news (shocks) on CEEC-3 conditional correlations between six financial markets. Time-varying correlation coefficients are estimated by DCC-MGARCH models for each financial market, an approach that overcomes the problem noted by Forbes and Rigobon, 2001 and Forbes and Rigobon, 2002 of a bias toward finding that contagion exists when using unconditional correlations, as these increase during crises as a result of higher volatility. The DCC-MGARCH model addresses this problem and thus eliminates this potential bias.7 By analysing the influence of local news, we can test whether it is real linkages between the CEEC-3 or, instead, a lack of information that cause investors to treat them equally and thus create contagion. International news can be viewed as a common shock to all three economies and is expected to increase cross-country correlations. Our specific research questions are: (i) How can we characterise the cross-country correlations and, in particular, study whether there are differences between financial markets and/or among countries? (ii) Is there a clear direction of (Granger-) causality of volatility from one country to another and can we identify one of the CEEC-3 as the principal source of volatility? (iii) Does news originating from the CEEC-3, the European Union, and the United States affect the time-varying correlations and can we identify categories of news that might be important sources of contagion? The paper proceeds as follows. In Section 2, we provide a brief overview of the existing literature on news and financial markets with a focus on contagion. In Section 3, we describe the construction of the news events and the data sources. Section 4 introduces the econometric methodology. We present our results in Section 5 and conclude in Section 6.

In this paper, we obtain bivariate conditional correlations of six CEEC-3 financial markets using a DCC-MGARCH model and daily data from 2004–2006. We address three main research questions. (i) The nature of the CEEC-3 financial market correlations. The highest conditional correlations are found between Hungary and Poland in all markets except the 3-month interest rates and 10-year bond yields. From a market perspective, correlations are highest on the foreign exchange and stock markets, whereas interbank money markets appear to be somewhat isolated from each other. In our sample, the correlations of CEEC-3 exchange rates versus the euro are lower than those versus the US dollar. We argue that changes in the CEEC-3/dollar exchange rate mainly reflect developments of the euro/dollar exchange rate. Among all markets, exchange rates and the stock markets show the highest persistence and thus a tendency toward contagion. (ii) Direction of (Granger-) causality of volatility from one country to another. We find some evidence of Granger-causality on the foreign exchange markets that cannot be linked to transaction volumes on these markets but is, instead, probably related to problems of stabilising the forint due to the twin deficit. However, we are unable to identify any one of the CEEC-3 as being the principal source of volatility in the region. (iii) The effect of news on the time-varying correlations. Combining the observations on the three countries in a stacked pool model, we investigate the impact of euro area, US, and CEEC-3 news on the conditional correlations. Including a broad set of news allows us to better appreciate the forces driving integrated financial markets. We observe no major effects of international news on the linkages of markets, suggesting that, at least in times without a major crisis, correlations are not determined by global or common shocks. However, local news appears to exert an influence on financial market correlations. This can be partly explained by country- or market-specific circumstances. Hungary seems to have an impact on CEEC-3 financial markets through its political, monetary, and macroeconomic news, which generally lowers market correlations. In comparison, reaction to Polish and Czech news is less idiosyncratic. ECB monetary policy news increases money market correlations in the medium term, indicating the leading role European monetary policy plays for CEEC-3 central banks. Evidence of contagion is found for Czech and Polish political news and for Czech, Polish, and German macroeconomic news (foreign exchange market). Polish macroeconomic news also increases correlations of stock market returns. However, the negative impact of Hungarian news on correlations shows that investors distinguish between the CEEC-3 and thus contagion does not occur following Hungarian news. Therefore, given that CEEC-3 conditional correlations of financial market returns are not highly integrated, investors can successfully engage in diversification strategies within this group of countries. The implications of our results are also important for policymakers. As an early warning system for financial market contagion, policymakers in the CEEC-3 should carefully monitor macroeconomic and political news in countries with which they have strong economic links and/or that belong to the same region. This monitoring could become even more important when these countries enter the ERM-II.