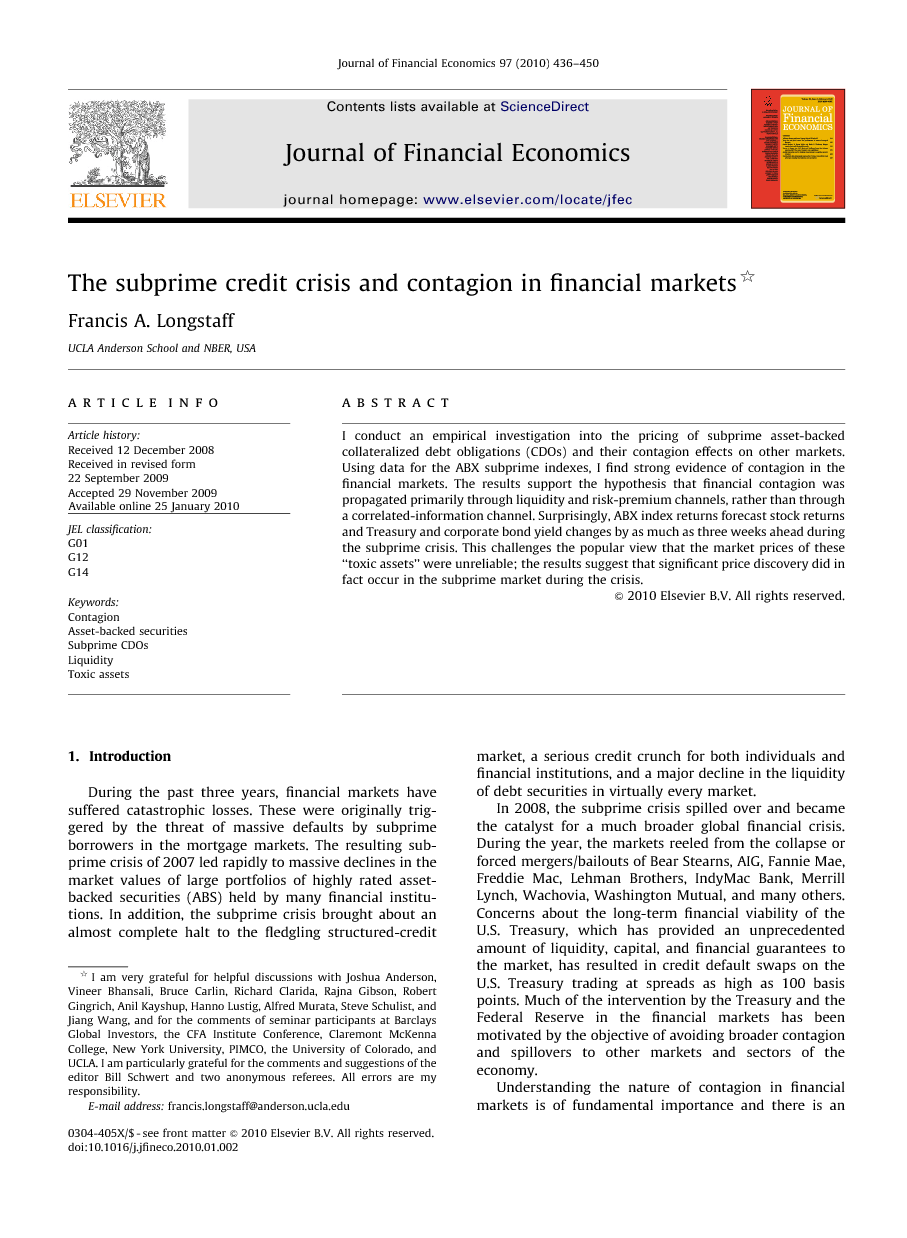 I conduct an empirical investigation into the pricing of subprime asset-backed collateralized debt obligations (CDOs) and their contagion effects on other markets. Using data for the ABX subprime indexes, I find strong evidence of contagion in the financial markets. The results support the hypothesis that financial contagion was propagated primarily through liquidity and risk-premium channels, rather than through a correlated-information channel. Surprisingly, ABX index returns forecast stock returns and Treasury and corporate bond yield changes by as much as three weeks ahead during the subprime crisis. This challenges the popular view that the market prices of these “toxic assets” were unreliable; the results suggest that significant price discovery did in fact occur in the subprime market during the crisis.

The 2007 subprime crisis provides an ideal opportunity for studying the effects of contagion in financial markets. I use data for the ABX indexes of subprime asset-backed CDOs to examine whether contagion occurred across markets as the crisis developed. Motivated by the frequently adopted definition of contagion in the literature as a significant temporary increase in cross-market linkages after a major distress event, I use a VAR framework to test for changes in the relation between the ABX market and other financial markets after the onset of the crisis. The results provide strong evidence of an increase in cross-market linkages. Prior to the subprime crisis, ABX returns contain little useful information for forecasting returns in other major markets. After the crisis began, however, the ABX indexes became highly predictive for Treasury bond yields, corporate yield spreads, stock market returns, and changes in the VIX volatility index. In many cases, the less-liquid ABX indexes are able to forecast Treasury yields, corporate yield spreads, stock market returns, and changes in the VIX up to three weeks ahead with surprisingly high R2s. These results provide strong support that financial contagion spread across markets as the subprime crisis developed. Since I focus only on the subprime crisis, it is important to acknowledge that my results are limited to this specific episode in the markets. A key aspect of the study is that the results allow us to contrast among the different models of contagion that appear in the extensive literature on the subject. For example, the length of the forecast horizon, in many cases as long as three weeks, argues against the view that contagion is spread via the correlated-information channel. The reason for this is simply that I would expect that price-discovery in the highly liquid stock, Treasury bond, corporate bond, and VIX markets would occur much more rapidly if the source of contagion was correlated information. Furthermore, the evidence that ABX index shocks during the subprime crisis became predictive for equity and fixed-income market trading patterns as well as for the amount of securitized financing is consistent with contagion having been spread via a liquidity/financing channel as argued by Allen and Gale (2000), Brunnermeier and Pedersen (2005), and others.