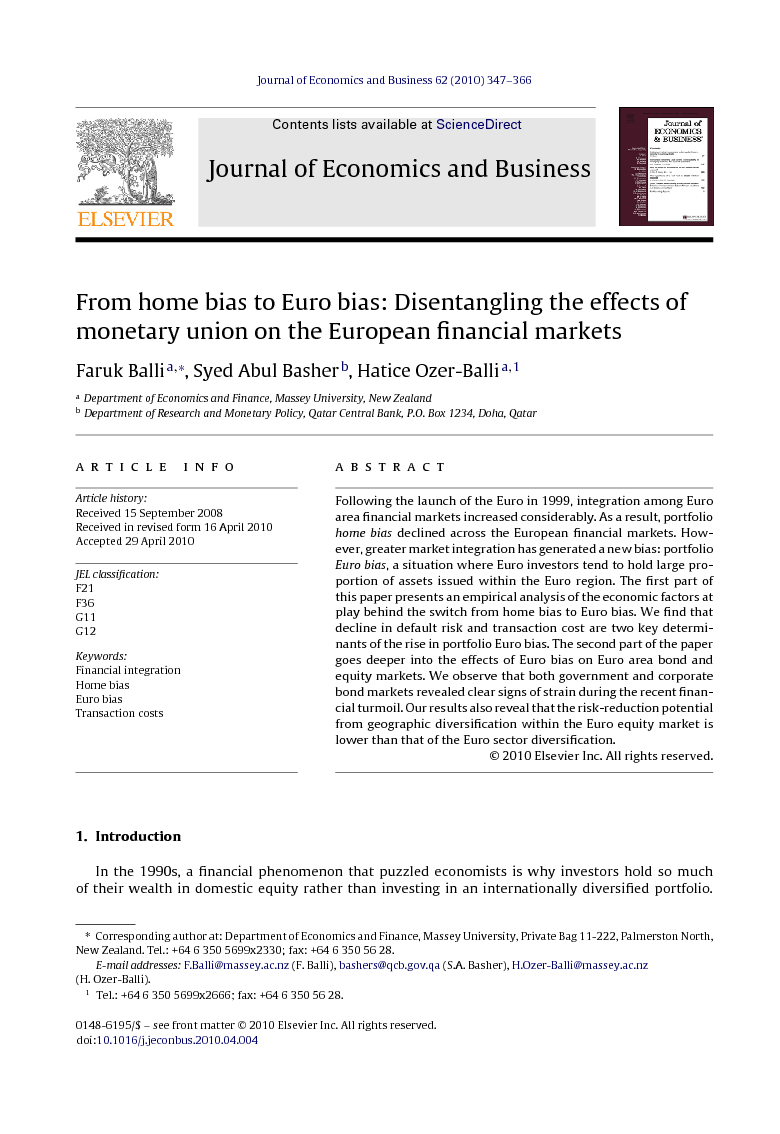 Following the launch of the Euro in 1999, integration among Euro area financial markets increased considerably. As a result, portfolio home bias declined across the European financial markets. However, greater market integration has generated a new bias: portfolio Euro bias, a situation where Euro investors tend to hold large proportion of assets issued within the Euro region. The first part of this paper presents an empirical analysis of the economic factors at play behind the switch from home bias to Euro bias. We find that decline in default risk and transaction cost are two key determinants of the rise in portfolio Euro bias. The second part of the paper goes deeper into the effects of Euro bias on Euro area bond and equity markets. We observe that both government and corporate bond markets revealed clear signs of strain during the recent financial turmoil. Our results also reveal that the risk-reduction potential from geographic diversification within the Euro equity market is lower than that of the Euro sector diversification.

The main objective of this paper is to empirically analyze the transition from the reduction in home bias to the rise in Euro bias as a consequence of the introduction of Euro in 1999. With this objective in mind, we analyze factors at play behind the switch from home bias to Euro bias. All in all, we argue that the rise in Euro bias is, to a large extent, explained by a similarly strong convergence in underlying fundamentals such as the elimination of exchange rate risk, convergence in economic policies (particularly monetary policies) and the restrictions on fiscal policies as outlined in the Stability and Growth Pact. Based on our main empirical analysis, we find that (lower) transaction cost is the leading factor for the attractiveness of bond investment in the Euro area. The substantial decline in bond underwriting costs as well as the reduction in sovereign debt positions of the federal governments led local investors to diversify their debt portfolio mainly within the Euro markets. The results are almost similar for the Euro area equity markets. We also analyze the degree of market integration in the three key Euro area markets: government bond, corporate bond and equity markets. Consistent with earlier studies, we also observe a remarkable convergence in government bond yields in the Euro area during the 2001–2007 period. However, we have also noticed a partial breakdown of the convergence process following the financial crisis of 2008–2009. Likewise, the corporate bond markets have also shown clear signs of strain during the recent financial turmoil. Finally, our results also reveal that the risk-reduction potential from geographic diversification within the Euro equity market is lower than that of the Euro sector diversification.