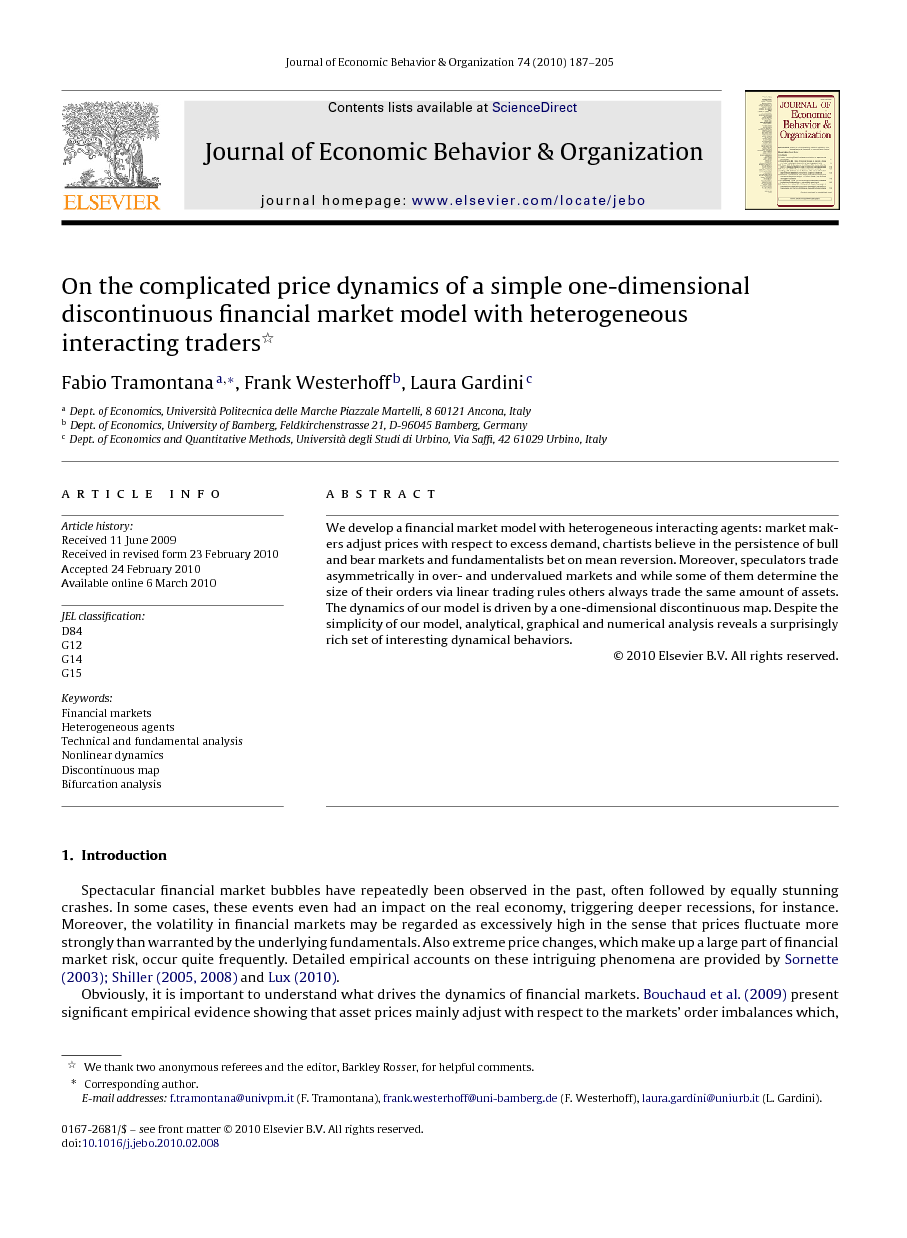 We develop a financial market model with heterogeneous interacting agents: market makers adjust prices with respect to excess demand, chartists believe in the persistence of bull and bear markets and fundamentalists bet on mean reversion. Moreover, speculators trade asymmetrically in over- and undervalued markets and while some of them determine the size of their orders via linear trading rules others always trade the same amount of assets. The dynamics of our model is driven by a one-dimensional discontinuous map. Despite the simplicity of our model, analytical, graphical and numerical analysis reveals a surprisingly rich set of interesting dynamical behaviors.

What drives the dynamics of financial markets? Since prices adjust with respect to demand and supply, a number of interesting models have been proposed in the recent past, which explicitly studied how agents determine their speculative investment positions. These papers have a strong empirical foundation since their main building blocks are supported by questionnaire and laboratory evidence according to which speculators rely on both technical and fundamental analysis to predict the directions of future market movements. We contribute to this research field by developing a novel financial market model with four different types of technical and fundamental traders. In particular, we take into account that traders may react asymmetrically to bull and bear market situations and that they may either formulate their orders on the basis of linear trading rules or simply prefer to trade fixed amounts of assets. From an economic point of view, our main results may be summarized as follows: • In (special) Case I we assume only the existence of type 1 chartists and type 1 fundamentalists. As a result, the price dynamics either converges towards the fundamental value or it explodes. • (Special) Case II highlights the particular role of type 2 traders. We have here an example of an extremely simple financial market model with heterogeneous traders which is nevertheless able to generate periodic or quasi-periodic price dynamics, at least for a subset of the parameter space, and thus reveals one potential engine of excess volatility. • In Case III type 1 and type 2 chartists and type 1 and type 2 fundamentalists are active. However, type 1 chartists dominate type 1 fundamentalists and type 2 fundamentalists dominate type 2 chartists. Compared to (special) Case II, bounded price dynamics now is always chaotic. • Finally, in Case IV we explore parameter constellations in which type 1 fundamentalists (strongly) dominate type 1 chartist and type 2 chartist dominate type 2 fundamentalists. Also this setup has the potential to generate chaotic price dynamics (but, for instance, also coexisting locally stable fixed points). Interestingly, we now observe intricate bull and bear market dynamics: asset prices may circle in the bull market for some time but then the market crashes and is characterized by temporary bear market fluctuations. Such erratic bull and bear market dynamics was first studied by Day and Huang (1990), yet within a different model environment. We would like to stress that our setup, i.e. the assumed set of trading rules, is a quite natural extension of what has been explored so far. In this sense, we add a new view to the literature which will hopefully help us to penetrate the complicated dynamics of financial markets even further. Let us finally point out a few avenues for future research. First, it would be interesting to explore a model in which the trading rules do not only take current prices into account. For instance, a technical trading rule in which orders depend on the most recent observed price trend can be assumed. Then the model would result in a two-dimensional discontinuous dynamical system. Second, the focus could be placed on more general trading rules which determine orders on the basis of a linear function but where the absolute size of the orders is also bounded. Finally, one may try to calibrate such models so that they are able to mimic certain stylized facts of financial markets. One way may be to add random shocks to the model, and we refer interest readers to a related paper by Westerhoff and Franke (2009). Another way may be to add (many) more rules to the market, as in Farmer and Joshi (2002).