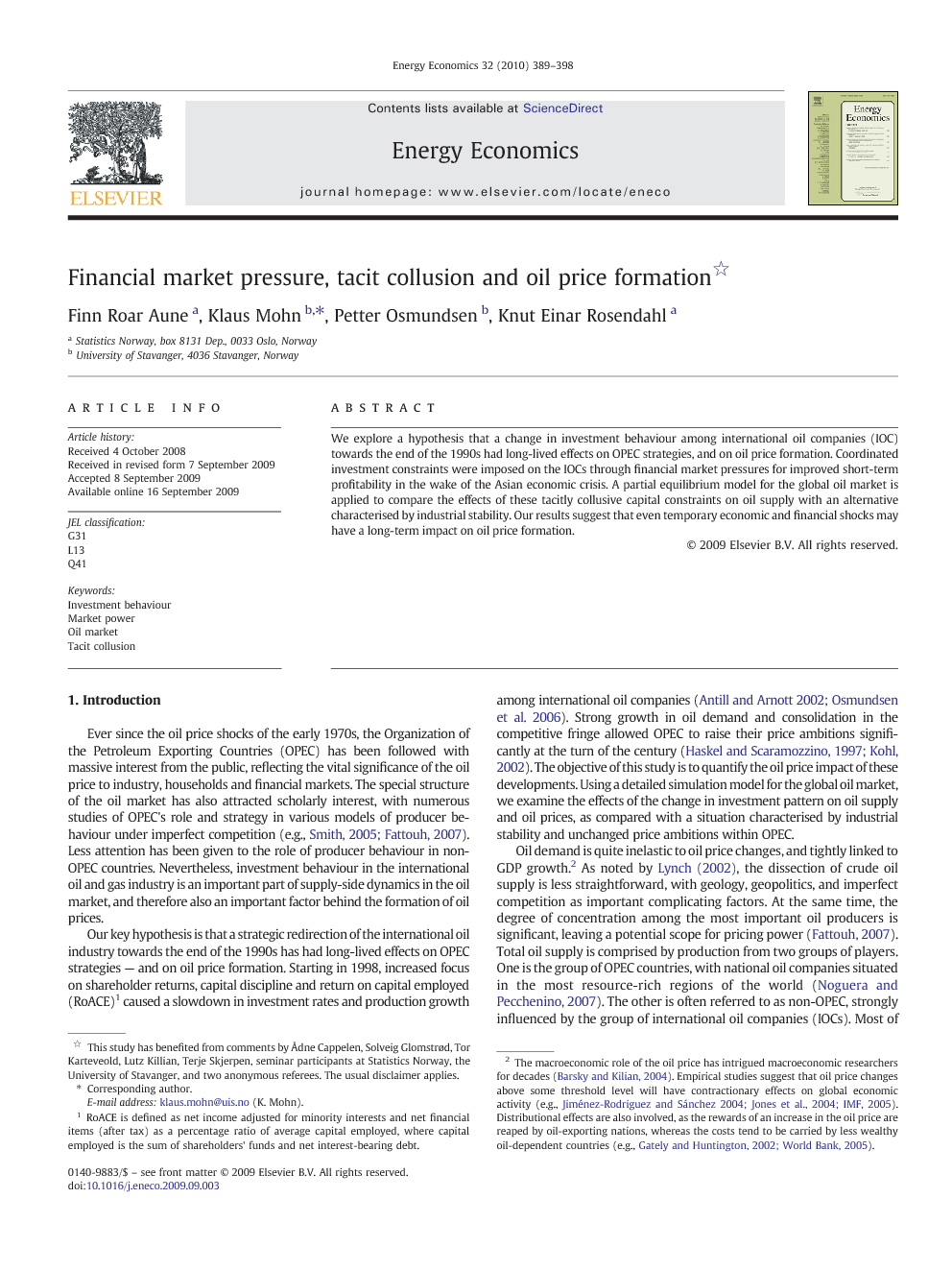 We explore a hypothesis that a change in investment behaviour among international oil companies (IOC) towards the end of the 1990s had long-lived effects on OPEC strategies, and on oil price formation. Coordinated investment constraints were imposed on the IOCs through financial market pressures for improved short-term profitability in the wake of the Asian economic crisis. A partial equilibrium model for the global oil market is applied to compare the effects of these tacitly collusive capital constraints on oil supply with an alternative characterised by industrial stability. Our results suggest that even temporary economic and financial shocks may have a long-term impact on oil price formation.

Ever since the oil price shocks of the early 1970s, the Organization of the Petroleum Exporting Countries (OPEC) has been followed with massive interest from the public, reflecting the vital significance of the oil price to industry, households and financial markets. The special structure of the oil market has also attracted scholarly interest, with numerous studies of OPEC's role and strategy in various models of producer behaviour under imperfect competition (e.g., Smith, 2005 and Fattouh, 2007). Less attention has been given to the role of producer behaviour in non-OPEC countries. Nevertheless, investment behaviour in the international oil and gas industry is an important part of supply-side dynamics in the oil market, and therefore also an important factor behind the formation of oil prices. Our key hypothesis is that a strategic redirection of the international oil industry towards the end of the 1990s has had long-lived effects on OPEC strategies — and on oil price formation. Starting in 1998, increased focus on shareholder returns, capital discipline and return on capital employed (RoACE)1 caused a slowdown in investment rates and production growth among international oil companies (Antill and Arnott, 2002 and Osmundsen et al., 2006). Strong growth in oil demand and consolidation in the competitive fringe allowed OPEC to raise their price ambitions significantly at the turn of the century (Haskel and Scaramozzino, 1997 and Kohl, 2002). The objective of this study is to quantify the oil price impact of these developments. Using a detailed simulation model for the global oil market, we examine the effects of the change in investment pattern on oil supply and oil prices, as compared with a situation characterised by industrial stability and unchanged price ambitions within OPEC. Oil demand is quite inelastic to oil price changes, and tightly linked to GDP growth.2 As noted by Lynch (2002), the dissection of crude oil supply is less straightforward, with geology, geopolitics, and imperfect competition as important complicating factors. At the same time, the degree of concentration among the most important oil producers is significant, leaving a potential scope for pricing power (Fattouh, 2007). Total oil supply is comprised by production from two groups of players. One is the group of OPEC countries, with national oil companies situated in the most resource-rich regions of the world (Noguera and Pecchenino, 2007). The other is often referred to as non-OPEC, strongly influenced by the group of international oil companies (IOCs). Most of these companies have their origin in the western hemisphere, they have private shareholders, and their shares are traded on stock exchanges in London and New York. Osmundsen et al. (2007) argue that changes in the interaction between listed oil companies and their shareholders have suppressed investment behaviour and production growth among these companies from 1998 and onwards. We present a more comprehensive assessment of the oil market impact of changes in IOC investment behaviour. Our modelling approach allows an empirical assessment of supply side dynamics following the change in investment policies in the oil industry after the Asian economic crisis. The model simulations clearly suggest that enhanced capital discipline caused a temporary slowdown in investment and production growth among international oil companies. Consequently, global exploration activities, investment expenditures and oil production growth were suppressed, allowing OPEC to raise their price ambitions. Specifically, we find that the curb on IOC investments around the turn of the century caused an increase in the oil price of around 10% in the long run. Both OPEC and non-OPEC producers gain from this development, whereas the cost is carried by oil-importers and consumers. The paper is organised as follows. Section 2 provides a review of previous research of OPEC behaviour and oil industry dynamics, as well as a discussion of the rationale for our hypotheses about supply side behaviour. In Section 3, we introduce the FRISBEE model, and discuss two different scenarios for the oil market — to isolate the effects on exploration activities, investments, oil production growth and price formation. Concluding remarks and directions for future research are presented in Section 4.

The process of capital formation in the oil and gas industry is an important part of the supply side dynamics in the oil market. Understanding how oil and gas companies think in terms of investment is therefore essential in order to develop and maintain the required insights for meaningful analyses of oil price formation. Over the last 10 years, international oil and gas companies have gone through a period of escalating market turbulence, restructuring and redirection of investment strategy. As the oil price dropped to a historical low in the aftermath of the Asian economic crisis, management focus shifted to short-term accounting returns, at the expense long-term field development and reserve replacement. We explore the impact of this strategy redirection on oil price formation. In our analyses we have assumed that the slowdown in petroleum sector investment after 1998 was due to a strong focus on RoACE. Determinants of changes in petroleum investments are complex, and other factors are also likely to have played a role. The record low oil price of 1998 played its part, dampening investments for several years. Cost increases are another likely candidate — they may have increased the required rate of return if they were presumed to represent systematic risk. Another major concern for the IOCs in the late 1990s was an active US foreign policy that made frequent use of sanctions. The Clinton administration imposed, e.g., the Iran Libya Sanction Act which prohibited companies (including non-US companies) from investing more than 20 million USD in Iran or Libya. The administration also threatened other countries, such as Nigeria, with sanctions. These policies deterred IOC investments. The objective of our paper is to analyse the effect of changed investment behaviour of IOC on OPEC production and oil price formation. Whatever the reason for a slowdown in investments, the qualitative results apply in our model. The temporary one-dimensional focus on RoACE forced the international oil companies to cut back on investments, thus generating higher oil prices. This change in strategy has clearly proved profitable for the international oil industry. Through the capital market analysts' RoACE-benchmarking of companies, an implicit coordination on lower investment levels was achieved. In retrospect, it can easily be demonstrated that deviation from the common strategy of low investment would have been profitable for any individual oil company. By maintaining its standard investment policy (e. g., a constant reinvestment ratio), it could have reaped the joint benefit of high oil prices and high production. However, tight co-operative capital discipline was maintained, as managers feared that a lower RoACE than the industry average would harm share prices in the short run, thus making it harder to raise capital and increasing the takeover probability. This study demonstrates how increased focus on shareholder returns, capital discipline and return on capital employed (RoACE) have caused a temporary slowdown in investment and production growth among international oil companies. We find that the strategic redirection of the international oil industry towards the end of the 1990s had long-lasting effects on OPEC behaviour — and on oil price formation. Our scenarios suggest that the change in investment strategies of the late 1990s caused a lift of approximately 10% in the long-term oil price. Both OPEC and non-OPEC producers gain from this development, whereas the cost is carried by oil-importers and consumers. Industrial leaders and their companies do not operate in a vacuum. Rather, they respond continuously to changing political and market environments. Their models and ways of thinking may be stable for periods. However, their mindset will also be challenged by external forces from time to time. And sometimes these pressures even bring about deeper changes. This study demonstrates that such changes may have persistent effects on the oil market. From the perspective of the investors, an adequate question is if strategies now have shifted too far away from accounting returns. The international oil industry has a history of over-investment at high oil prices (e.g., Jensen 1986). However, there are signs that the current situation is different from the traditional high price cycle scenario: the lack of adequate investment projects actually put an effective curb on investments, and reserve replacement levels are low. On the other hand, some of the current investment projects in the oil industry have break-even prices considerable above historic oil prices. Company managers thus face some tough decisions. Traditional counter-cyclical asset trading (selling reserves at top of the oil price cycle) may not seem so tempting when the company is unable to replace its reserves. On the other hand, buying reserves in the current market sentiment may seem risky. Assets are traded at prices that entail a considerable downside risk. Part of this picture is the fact that the IOCs are competing for new reserves against NOCs that are not subject to the same capital market scrutiny. An interesting direction for future research would be to study the stability of the investment process in the oil and gas industry in greater detail, preferably with micro-econometric studies of company data. Modern econometric techniques may reveal more exact information on how the process of capital formation in the oil and gas industry was altered in the late 1990s.