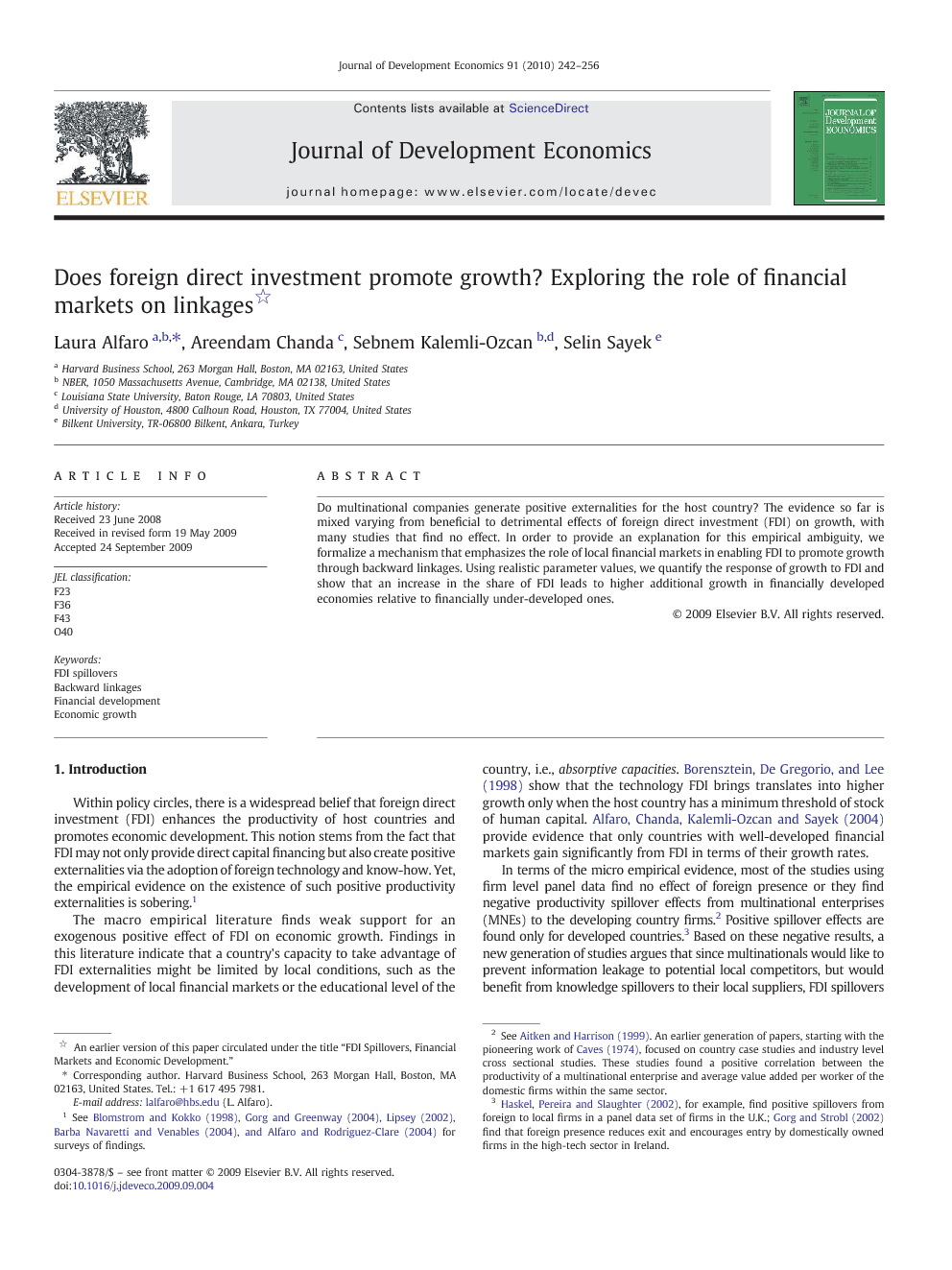 Do multinational companies generate positive externalities for the host country? The evidence so far is mixed varying from beneficial to detrimental effects of foreign direct investment (FDI) on growth, with many studies that find no effect. In order to provide an explanation for this empirical ambiguity, we formalize a mechanism that emphasizes the role of local financial markets in enabling FDI to promote growth through backward linkages. Using realistic parameter values, we quantify the response of growth to FDI and show that an increase in the share of FDI leads to higher additional growth in financially developed economies relative to financially under-developed ones.

Although there is a widespread belief among policymakers that FDI generates positive productivity externalities for host countries, the empirical evidence fails to confirm this belief. In the particular case of developing countries, both the micro and macro empirical literatures consistently find either no effect of FDI on the productivity of the host country firms and/or aggregate growth or negative effects. In this paper, we try to bridge this gap between the theoretical and the empirical literatures. The model rests on a mechanism that emphasizes the role of local financial markets in enabling FDI to promote growth through the creation of backward linkages. When financial markets are developed enough, the host country benefits from the backward linkages between the foreign and domestic firms with positive spillovers to the rest of the economy. Our calibration exercises show that an increase in FDI leads to higher growth rates in financially developed countries compared to those observed in financially poorly developed ones. Moreover, the calibration section highlights the importance of local conditions (absorptive capacities) for the effect of FDI on economic growth. We find larger growth effects when goods produced by domestic firms and MNEs are substitutes rather than complements. Policymakers should be cautious when implementing policies aimed at attracting FDI that is complementary to local production. Desired complementarities are those between final and intermediate industry sectors; not necessarily between domestic and foreign final good produces. Finally, by varying the relative skill ratios–while assuming that MNEs use skilled labor more intensively–our results highlight the critical role of human capital in allowing growth benefits from FDI to materialize. Some caveats are in order. We have focused on only one kind of spillover. There are likely to be additional spillovers and technology transfers. Besides, our results are based on a model that takes FDI as given. The decision of a firm to outsource or invest abroad (and the potential to generate linkages) may depend on the conditions of the country and on the characteristics of the firm. Furthermore, the possibility of imported intermediate inputs would hinder the extent of backward linkages. Future research should allow for tradability of intermediate inputs, and for differential use of alternative sources of intermediate inputs across domestic and foreign firms.