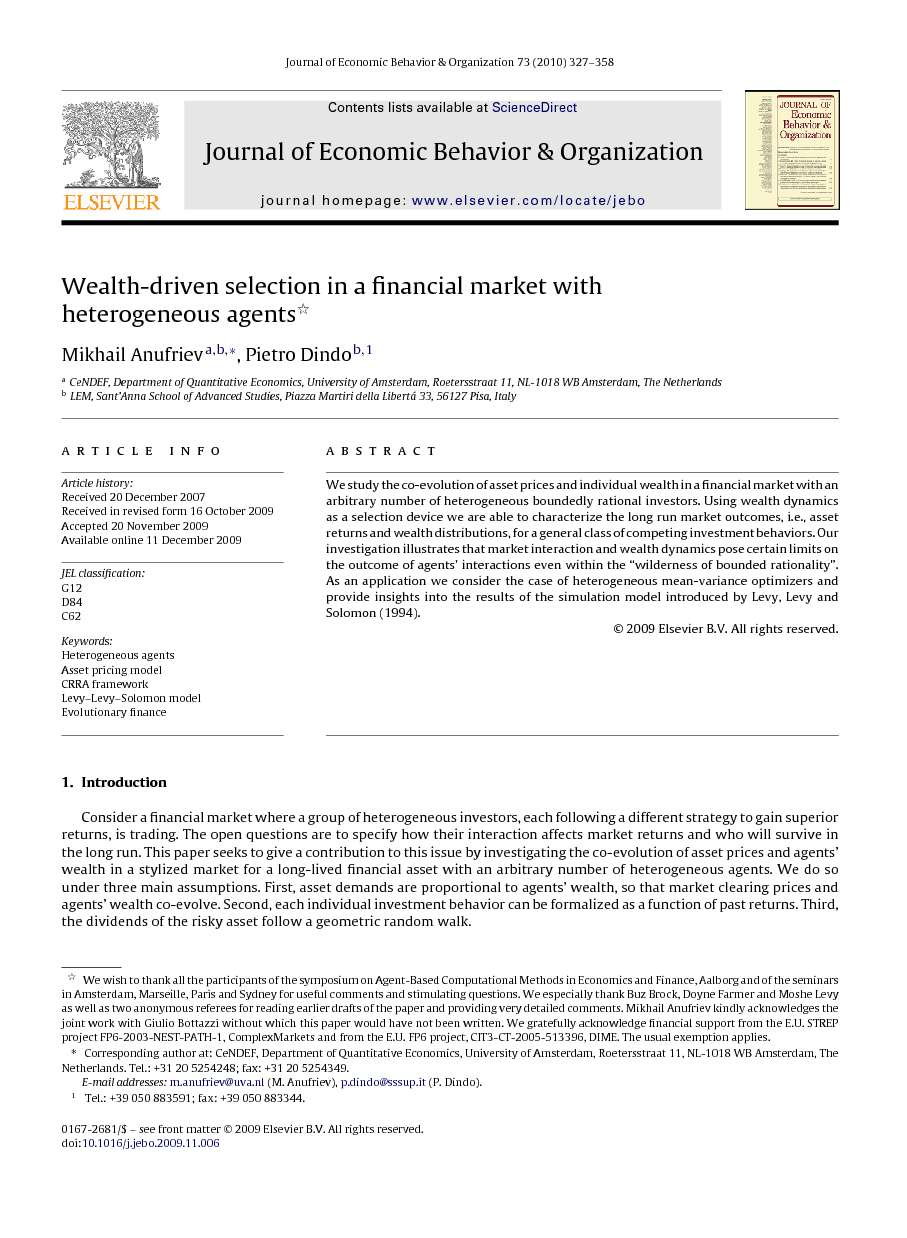 We study the co-evolution of asset prices and individual wealth in a financial market with an arbitrary number of heterogeneous boundedly rational investors. Using wealth dynamics as a selection device we are able to characterize the long run market outcomes, i.e., asset returns and wealth distributions, for a general class of competing investment behaviors. Our investigation illustrates that market interaction and wealth dynamics pose certain limits on the outcome of agents’ interactions even within the “wilderness of bounded rationality”. As an application we consider the case of heterogeneous mean-variance optimizers and provide insights into the results of the simulation model introduced by Levy, Levy and Solomon (1994).

In his recent survey, LeBaron (2006) stresses that agent-based models do not require analytical tractability (as opposed to Heterogeneous Agents Models) and, therefore, are more flexible and realistic for what concerns their assumptions. In this paper we show that flexibility can be achieved in an analytically-tractable heterogeneous agent framework too. In fact, we have performed an analytic investigation of a stylized model of a financial market where an arbitrary set of investors is trading. Under the assumption that the impact of different agents on the market depends on their wealth shares, we have derived existence and stability results for a general set of investment functions and an arbitrary number of agents. Due to the selecting role of wealth dynamics, we have been able to characterize the steady-state equilibria of this economy. They can either lead to different average return for the risky and the riskless assets, in which case they are at the intersection of each agent Equilibrium Investment Function with the so called Equilibrium Market Curve, or lead to the same average return for the two assets. We have also shown that our analysis of a deterministic market dynamics is helpful for the understanding of its simulations with a stochastic dividend process. Having assumed exogenous growth dividend process, we have reached two research objectives. First, we have been able to investigate which features of previous results using the same framework, such as Anufriev et al. (2006) or Anufriev and Bottazzi (2009), are due to their assumption of a constant dividend yield and which are of a more general nature. Second, we have provided an analytical support of the LLS simulations, which would have not be possible within the CRRA framework developed so far. As for the first objective, we have shown that the specification of the dividend process does play a role in shaping the price and dividend dynamics. In our framework, the prices grow at a rate that is derived from the exogenous parameters, while the ecology of trading behaviors can affect only the dividend yield. In previous CRRA contributions on the other hand, the dividend yield is fixed and the ecology of behaviors affects the growth rate of prices and, consequently, dividends. At the same time the common CRRA framework, with a wealth-driven selection and a coupled price-wealth dynamics, is responsible for similarities such as the existence of a low-dimensional locus of possible steady-states, i.e., Equilibrium Market Curve (though of a different shape). On the way to our second objective, we have considered an example with mean variance maximizers characterized by two parameters: degree of risk aversion and memory span used to estimate future returns. When the growth rate of dividends is larger than the risk-free rate, the agents with the lowest risk aversion dominate the market, provided that their memory spans are big enough. As a result the market dynamics converge to the stable steady-state equilibrium, where prices are growing as fast as the dividends, and lower the risk aversion the higher the value of the dividend yield. In this case price fluctuations are due to the exogenous fluctuations of dividends. Otherwise, when the memory is not long enough, agents with different investment strategies coexist and the price fluctuations are endogenously determined. When, instead, the growth rate of dividends is smaller than the risk-free rate, steady-state equilibrium asset returns are equal to risk-free returns and the dividend yield converges to zero, no matter the ecology of agents. As a result wealths returns are equal for all investment functions and there is no selection. We have also explained that these differences in the market dynamics and selecting regime are due to the exogenous inflow of wealth in the economy, both through dividends and riskless returns.