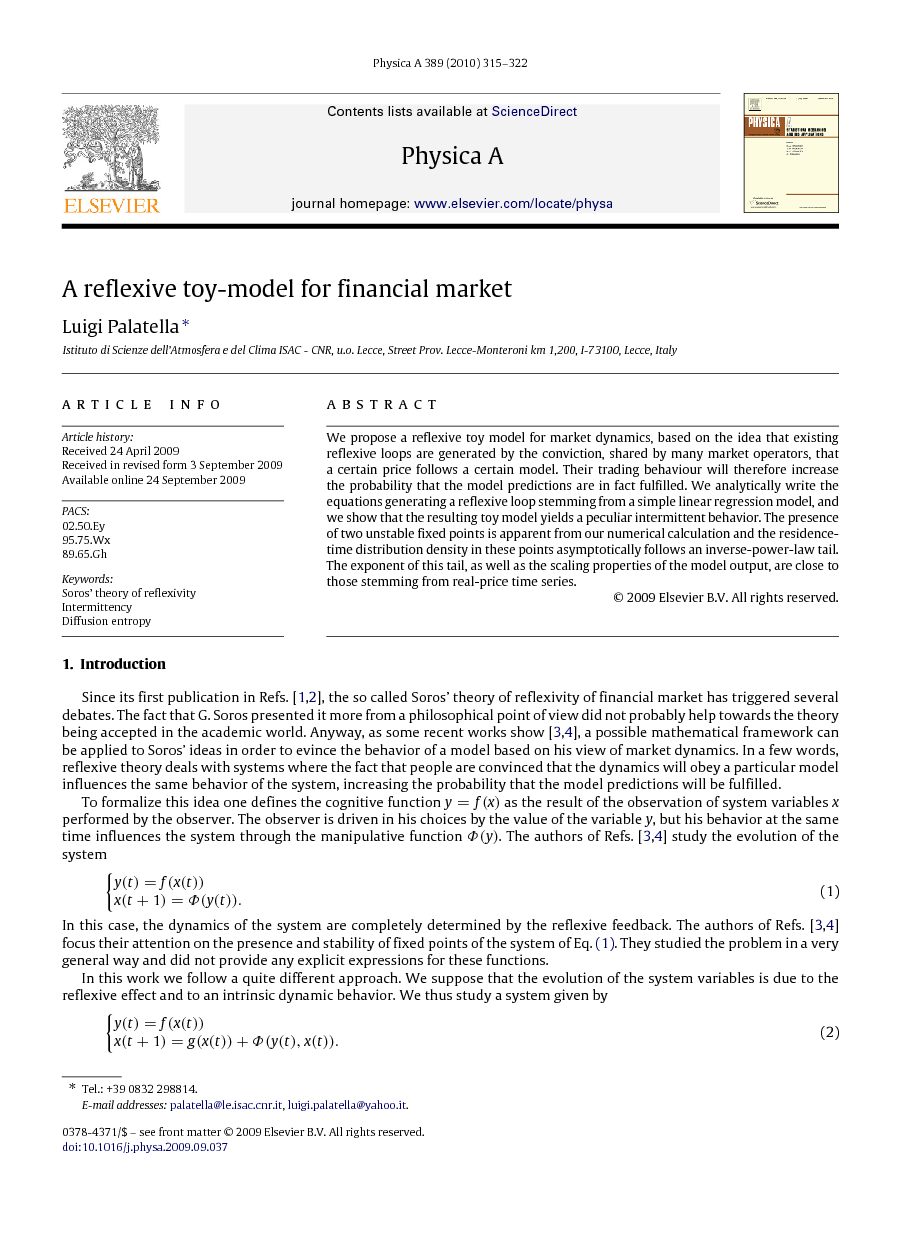 We propose a reflexive toy model for market dynamics, based on the idea that existing reflexive loops are generated by the conviction, shared by many market operators, that a certain price follows a certain model. Their trading behaviour will therefore increase the probability that the model predictions are in fact fulfilled. We analytically write the equations generating a reflexive loop stemming from a simple linear regression model, and we show that the resulting toy model yields a peculiar intermittent behavior. The presence of two unstable fixed points is apparent from our numerical calculation and the residence-time distribution density in these points asymptotically follows an inverse-power-law tail. The exponent of this tail, as well as the scaling properties of the model output, are close to those stemming from real-price time series.

Since its first publication in Refs. [1] and [2], the so called Soros’ theory of reflexivity of financial market has triggered several debates. The fact that G. Soros presented it more from a philosophical point of view did not probably help towards the theory being accepted in the academic world. Anyway, as some recent works show [3] and [4], a possible mathematical framework can be applied to Soros’ ideas in order to evince the behavior of a model based on his view of market dynamics. In a few words, reflexive theory deals with systems where the fact that people are convinced that the dynamics will obey a particular model influences the same behavior of the system, increasing the probability that the model predictions will be fulfilled. To formalize this idea one defines the cognitive function y=f(x)y=f(x) as the result of the observation of system variables xx performed by the observer. The observer is driven in his choices by the value of the variable yy, but his behavior at the same time influences the system through the manipulative function Φ(y)Φ(y). The authors of Refs. [3] and [4] study the evolution of the system equation(1) View the MathML source{y(t)=f(x(t))x(t+1)=Φ(y(t)). Turn MathJax on In this case, the dynamics of the system are completely determined by the reflexive feedback. The authors of Refs. [3] and [4] focus their attention on the presence and stability of fixed points of the system of Eq. (1). They studied the problem in a very general way and did not provide any explicit expressions for these functions. In this work we follow a quite different approach. We suppose that the evolution of the system variables is due to the reflexive effect and to an intrinsic dynamic behavior. We thus study a system given by equation(2) View the MathML source{y(t)=f(x(t))x(t+1)=g(x(t))+Φ(y(t),x(t)). Turn MathJax on If Φ(y(t),x(t))=0Φ(y(t),x(t))=0 this system reduces to a simple dynamical system driven by the function g(x)g(x), without the reflexive effect. In this paper we provide an explicit expression for both f(x)f(x) and Φ(y(t),x(t))Φ(y(t),x(t)), obtaining the toy-model for financial market. Our toy model assumes that operators believe in a simplified version of the so called “technical analysis”. The attempt of the market operator to find trends in prices behavior constitutes the cognitive function, while the operators’ confidence in their technical analysis model, together with the consequence of the resulting trades on the prices, is described by the manipulative function Φ(y(t),x(t))Φ(y(t),x(t)). We observe that the suggested toy-model presents only two unstable equilibrium states. These states are meta-stable in the sense that the system stays close to these positions for very long residence times. We show that the probability density function of the residence times in these states presents power-law tails, i.e. it is characterized by a power-law asymptotic behavior for large residence times. In the numerical simulations of the model we observe a power-law tail with exponent μ≃2μ≃2. This means that, even if unstable, the presence of these states deeply influences the dynamics of the model. We will show that the power law tail exponent and the results obtained on the model with an intermittent time-series-analysis technique, called diffusion entropy [5], are practically the same obtained, with the same techniques, on real market data as shown in Refs. [6] and [7]. This fact confirms that our toy-model shares some important property in common with real market dynamics. The outline of the paper is as follows. In Section 2 we present and describe the toy-model and its qualitative behavior. In Section 3 we calculate the probability density function of the waiting times in the unstable equilibrium states. In Section 4 we briefly introduce the diffusion-entropy technique and we compare the results obtained on the model output with those already presented in literature on real data. In Section 5 we draw some conclusions on the real market and suggest further developments stemming from our approach.

In this work, we suggest an explicit reflexive model for the time evolution of price dynamics. This model should be considered as a toy-model and it is not yet suitable for direct comparison with real price time series. Nevertheless the model recovers some statistical properties of real price dynamics that were studied in some previous papers. In particular, the model dynamics show the presence of long trends of increase and decrease or lateral movement periods, like real prices do. The model also has an intermittent behavior with a power-law tail in the waiting-time probability density function and a long time anomalous scaling that turns out to be close to those measured in real time series. Moreover, the intermittent behavior takes place on time scale greater than the value of NN, thus suggesting that also a short time reflexive mechanism can lead to trends that persist for a long time. These results suggest that some features of our model are shared by real market dynamics. For this reason we think that further development on the subject of a reflexive model can provide new insight on real price dynamics, especially on the occurrence of bubble, burst and oscillating behavior. It is possible, for instance, to extend the model with more than a moving window length NN, obtaining two reflexive feedbacks on different time scales (in order to model a sort of short- and long-time investor behavior) and to calibrate the different parameters to mimic real-price time series.