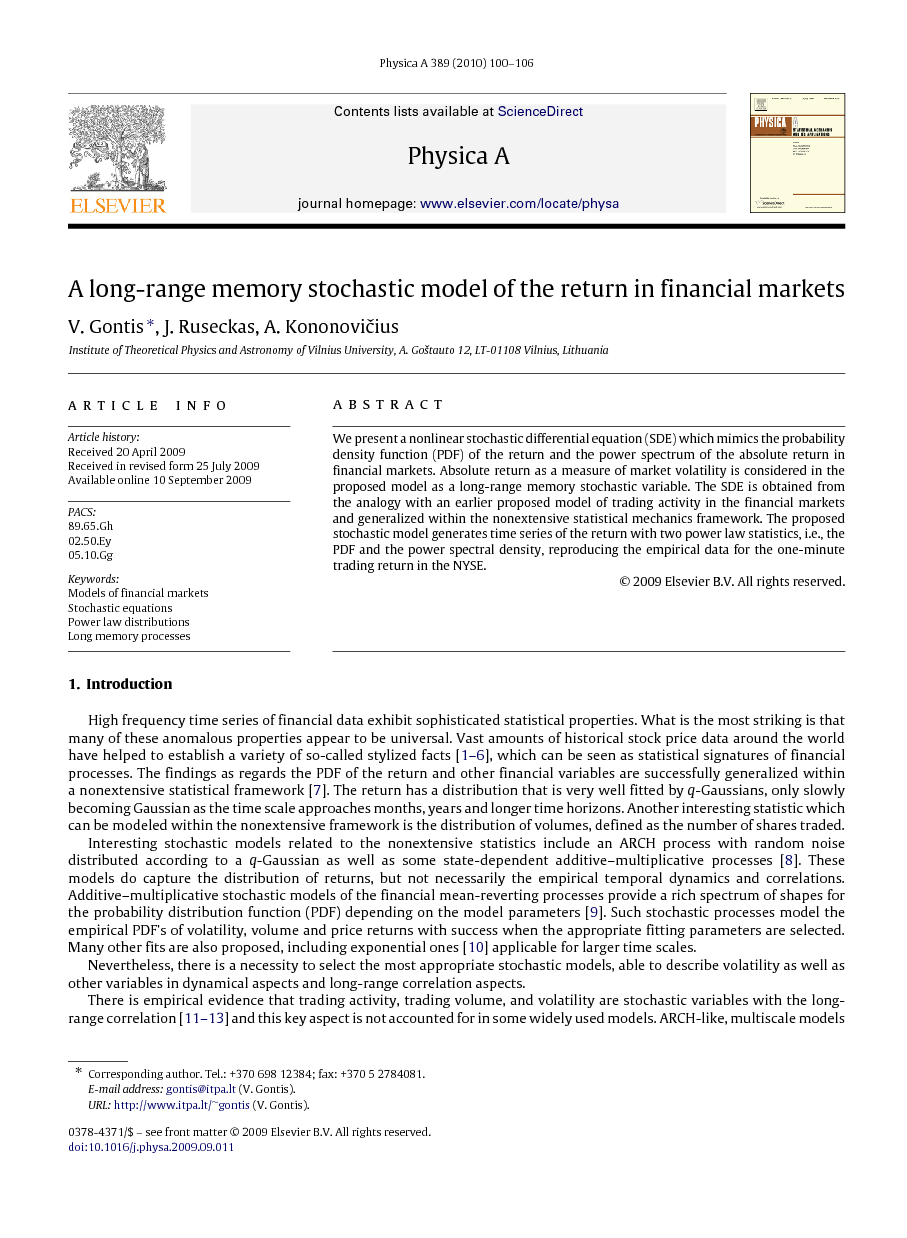 We present a nonlinear stochastic differential equation (SDE) which mimics the probability density function (PDF) of the return and the power spectrum of the absolute return in financial markets. Absolute return as a measure of market volatility is considered in the proposed model as a long-range memory stochastic variable. The SDE is obtained from the analogy with an earlier proposed model of trading activity in the financial markets and generalized within the nonextensive statistical mechanics framework. The proposed stochastic model generates time series of the return with two power law statistics, i.e., the PDF and the power spectral density, reproducing the empirical data for the one-minute trading return in the NYSE.

High frequency time series of financial data exhibit sophisticated statistical properties. What is the most striking is that many of these anomalous properties appear to be universal. Vast amounts of historical stock price data around the world have helped to establish a variety of so-called stylized facts [1], [2], [3], [4], [5] and [6], which can be seen as statistical signatures of financial processes. The findings as regards the PDF of the return and other financial variables are successfully generalized within a nonextensive statistical framework [7]. The return has a distribution that is very well fitted by qq-Gaussians, only slowly becoming Gaussian as the time scale approaches months, years and longer time horizons. Another interesting statistic which can be modeled within the nonextensive framework is the distribution of volumes, defined as the number of shares traded. Interesting stochastic models related to the nonextensive statistics include an ARCH process with random noise distributed according to a qq-Gaussian as well as some state-dependent additive–multiplicative processes [8]. These models do capture the distribution of returns, but not necessarily the empirical temporal dynamics and correlations. Additive–multiplicative stochastic models of the financial mean-reverting processes provide a rich spectrum of shapes for the probability distribution function (PDF) depending on the model parameters [9]. Such stochastic processes model the empirical PDF’s of volatility, volume and price returns with success when the appropriate fitting parameters are selected. Many other fits are also proposed, including exponential ones [10] applicable for larger time scales. Nevertheless, there is a necessity to select the most appropriate stochastic models, able to describe volatility as well as other variables in dynamical aspects and long-range correlation aspects. There is empirical evidence that trading activity, trading volume, and volatility are stochastic variables with the long-range correlation [11], [12] and [13] and this key aspect is not accounted for in some widely used models. ARCH-like, multiscale models of volatility, which assume that the volatility is governed by the observed past price changes over different time scales, have been recently proposed [14] and [15]. Trading volume and trading activity are positively correlated with market volatility. Moreover, trading volume and volatility show the same type of long memory behavior [16]. Recently we investigated analytically and numerically the properties of stochastic multiplicative point processes [17] and [18], derived a formula for the power spectrum and related the model with the general form of the multiplicative stochastic differential equation [19] and [20]. The extensive empirical analysis of the financial market data, supporting the idea that the long-range volatility correlations arise from trading activity, provides valuable background for further development of the long-ranged memory stochastic models [12] and [13]. The power law behavior of the autoregressive conditional duration process [21] based on the random multiplicative process and its special case the self-modulation process [22], exhibiting 1/f1/f fluctuations, supported the idea of stochastic modeling with a power law PDF and long memory. A stochastic model of trading activity based on an SDE driven Poisson-like process has been already presented in [23]. We further develop an approach of modulating the SDE with a closer connection to the nonextensive statistics in order to model the dynamics of the return in this paper. Long memory (long-term dependence) has been defined in time domain in terms of autocorrelation power law decay, or in frequency domains in terms of power law growth of low frequency spectra. Despite statistical methodology being developed for data with a long-range dependence and the solid mathematical foundations of the area [24], let us consider behavior of the financial variables only in the frequency domain, analyzing the power spectral density. In Section 2 we present the nonlinear SDE generating a signal with a qq-Gaussian PDF and power law spectral density. In Section 3 we analyze the tick by tick empirical data for trades on the NYSE for 24 shares and adjust the parameters of the proposed equations to the empirical data. A short discussion and conclusions are presented in Section 4.

In the previous work [23] we provided evidence that long-range memory fluctuations of trading activity in the financial markets may be considered as the background stochastic process responsible for the fractal properties of other financial variables. This background stochastic process can be reproduced using a nonlinear SDE (15) with multiplicative noise composed of two powers of a stochastic variable. The two powers in the SDE reveal different behaviors of the market in the periods of different trading activity. In this paper we generalized the form of the background SDE within the nonextensive statistical mechanics framework to reproduce fascinating statistical properties of the financial variables with a qq-Gaussian PDF and fractured behavior of the power spectrum. In the prevailing relatively calm periods, with x<1/ϵx<1/ϵ and multiplicativity specified by η=5/2η=5/2, markets behave as stationary stochastic processes with a qq-Gaussian PDF, q∼1+2/5=1.4q∼1+2/5=1.4. In the periods of excited behavior, when x>1/ϵx>1/ϵ, the PDF approaches a nonstationary regime, λ∼2λ∼2. This leads to the excess values of financial variables, which have to be restricted by the additional limits in the SDE, term (xϵη)2(xϵη)2 giving the exponential restriction of diffusion at the excess value x∼1/ϵηx∼1/ϵη. These rare escapes of a continuous stochastic variable smoothed by an integration procedure do not very considerably contribute to the main PDF of a financial variable. However, these escapes condition the behavior of the power spectrum, reducing the exponent ββ of the power law distribution S(f)∼1/fβS(f)∼1/fβ in the region of higher frequencies. In the case of the return, the background stochastic process defined by Eq. (15) is hidden by the secondary high amplitude qq-Gaussian stochastic process ξ{r0,λ2}ξ{r0,λ2}. Though the background fluctuations are considerably lower than the secondary ones, this drives the whole process through the empirically defined Eqs. (19) and (20). The generalized new form of the continuous stochastic differential, equation (15), enables us to reproduce the main statistical properties of the return, observed in the financial markets. All parameters introduced are recoverable from the empirical data and are responsible for the specific statistical features of real markets. The model does capture the distribution of the return, the empirical temporal dynamics and correlations evaluated through the power spectral density of absolute return. The model definition with two powers of multiplicative noise enables us to reproduce the power spectral density with two different scaling exponents, as observed in the empirical data. Stochastic modeling of the financial variables with the nonlinear SDE is consistent with the nonexte