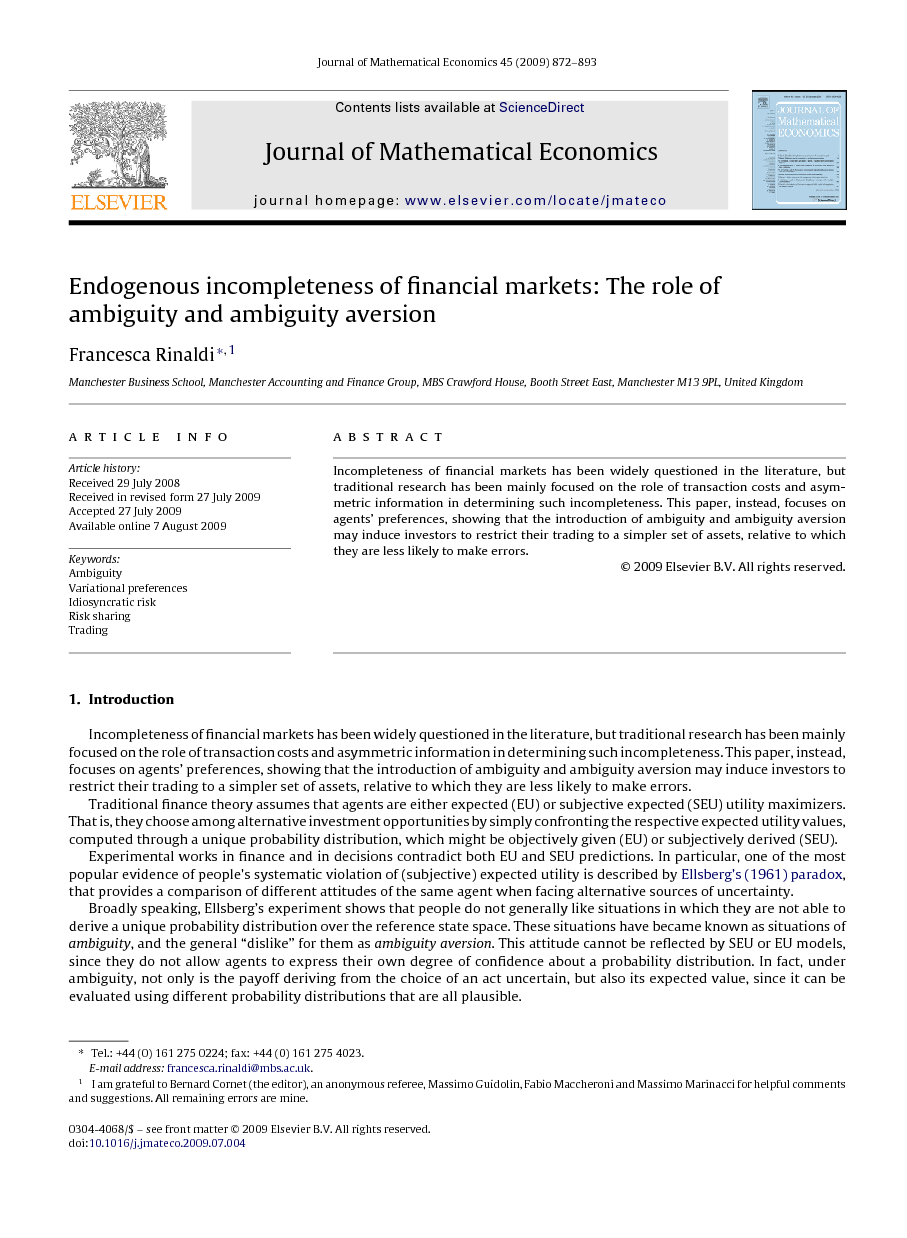 Incompleteness of financial markets has been widely questioned in the literature, but traditional research has been mainly focused on the role of transaction costs and asymmetric information in determining such incompleteness. This paper, instead, focuses on agents’ preferences, showing that the introduction of ambiguity and ambiguity aversion may induce investors to restrict their trading to a simpler set of assets, relative to which they are less likely to make errors.

In this paper, we have generalized Mukerji and Tallon’s analysis of endogenous incompleteness of financial markets under ambiguity, by considering agents with variational preferences. Our findings only partially confirm Mukerji and Tallon’s results, since the sufficient condition for the absence of trade provided in our main theorem is crucially related with non-differentiability of the functional representation of preferences. More specifically, we show that such a condition cannot be satisfied when agents display multiplier preferences. Hence, the no-trade result can be extended only to a specific subclass of variational preferences, namely the class characterized by non-essentially strictly convex ambiguity index. For this specific subclass, some interesting results can be derived. In particular, trade of financial assets whose payoff is greatly affected by idiosyncratic risk may break down, so that agents are suboptimally left exposed to risk. Further, even when the number of available assets becomes arbitrarily large, agents cannot benefit from diversification, so that trade collapses in contradiction to what is prescribed by subjective expected utility theory. Finally, when the analysis is restricted to an extremely simple set up, two opposite tendencies are in act. From one side, risk aversion and the great variation of endowment across states tend to generate trade for insurance purposes. On the other side, the great variation of the idiosyncratic component lets the agents feel less confident about their probability assignment, and, therefore, it prevents trade. Since ambiguity and ambiguity aversion have been shown to be empirically relevant in financial markets, it is of crucial importance to distinguish between market anomalies that can be fully explained through kinks in otherwise standard preferences, and anomalies that instead are a more general consequence of ambiguity. Indeed, as discussed in Maccheroni et al. (2006), any variational preference can be arbitrarily well approximated by an everywhere differentiable variational preference, so that results that rely on non-differentiability only are in general not robust. In particular, for what concerns under-participation, such a distinction would have deep implications on financial regulation and assets design. In fact, if the reduction of the effects of asymmetric information and transaction costs is not by itself sufficient to guarantee completeness of risk sharing under ambiguity, then the introduction of new derivative securities will be necessary to offer alternative hedging possibilities. The clarification of the roles played by ambiguity and non-differentiability in determining some puzzling financial phenomena is also the aim of our future research, and we believe that the generality and the properties of variational preferences render them extremely suitable for the achievement of this result.