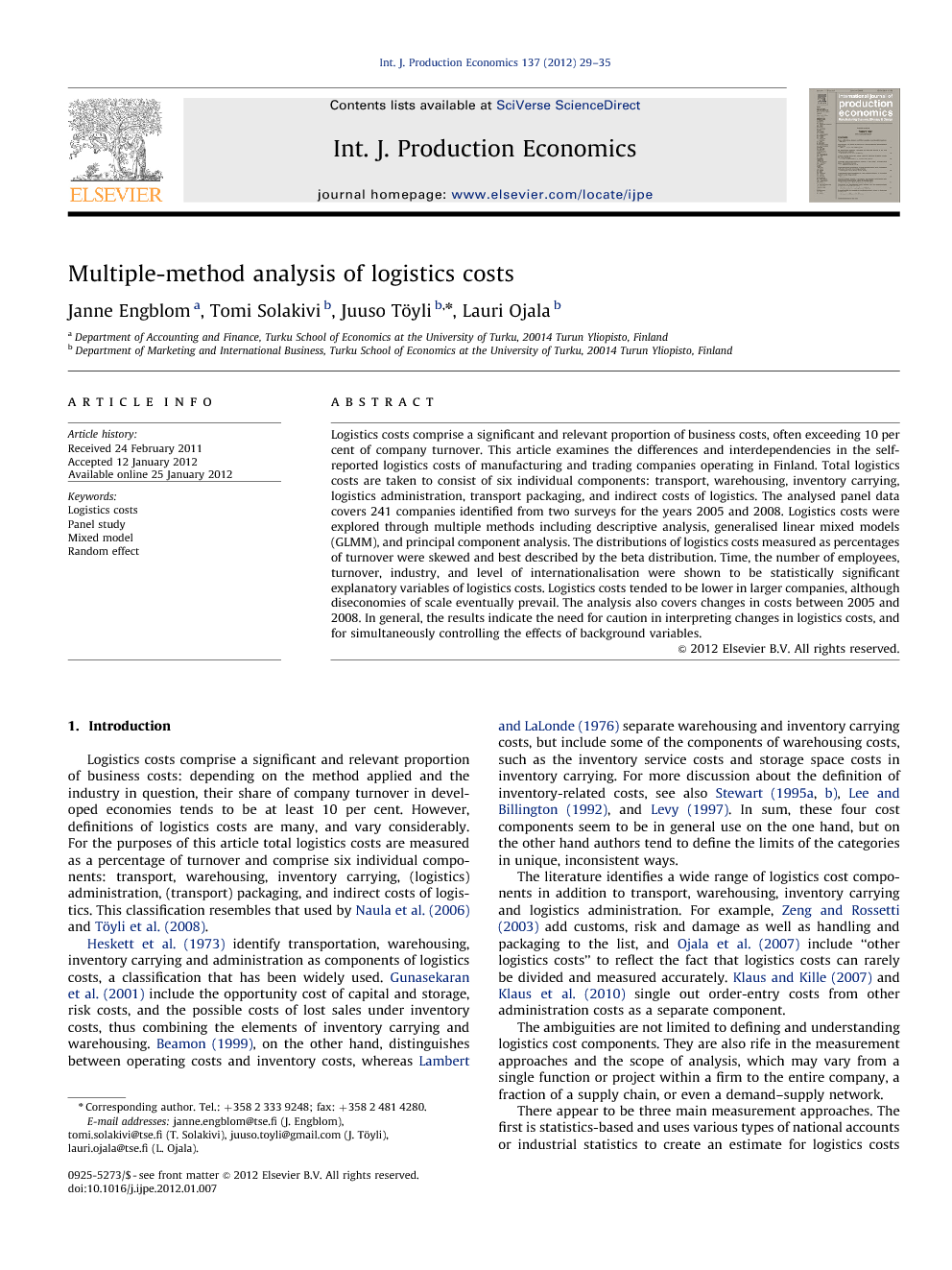 Logistics costs comprise a significant and relevant proportion of business costs, often exceeding 10 per cent of company turnover. This article examines the differences and interdependencies in the self-reported logistics costs of manufacturing and trading companies operating in Finland. Total logistics costs are taken to consist of six individual components: transport, warehousing, inventory carrying, logistics administration, transport packaging, and indirect costs of logistics. The analysed panel data covers 241 companies identified from two surveys for the years 2005 and 2008. Logistics costs were explored through multiple methods including descriptive analysis, generalised linear mixed models (GLMM), and principal component analysis. The distributions of logistics costs measured as percentages of turnover were skewed and best described by the beta distribution. Time, the number of employees, turnover, industry, and level of internationalisation were shown to be statistically significant explanatory variables of logistics costs. Logistics costs tended to be lower in larger companies, although diseconomies of scale eventually prevail. The analysis also covers changes in costs between 2005 and 2008. In general, the results indicate the need for caution in interpreting changes in logistics costs, and for simultaneously controlling the effects of background variables.

This article examined the differences and the interdependencies in the logistics cost components and in the total logistics costs. The analyses covered the associations between time, turnover, numbers of employees, industry, and the degree of internationalisation and both the various components and the total costs. Related to the company size, measured as the number of employees or annual turnover, transport costs, warehousing costs, and total logistics costs showed a U-shaped pattern, whereas inventory carrying costs decreased and administration costs were unstable, but the trend was downward. This result could be partly attributable to economies of scale but also suggest that after certain size the diseconomies of scale may prevail. Total logistics costs, and warehousing costs, inventory carrying and packaging costs turned out to be statistically significantly higher for trading than for manufacturing companies. This result is contradictory to those reported in most previous studies both internationally and in Finland, most of which refer to lower costs in trading companies. The various cost components were also estimated to be higher among export companies than in companies operating either internationally, with production facilities abroad, or entirely in the domestic market. It may be that export companies face the challenges of international supply chains without being able to exploit the scale and location-specific advantages often associated with international firms. The analysis also covered changes in costs between 2005 and 2008. The largest relative and only statistically significant change was in administration costs, other changes being statistically insignificant. This result is surprising, given that administration costs could be considered the most inelastic of the components under study. These findings also contribute to the discussion in most of the studies reporting annual or biannual changes in costs. These studies tend to report absolute changes without sufficient testing of their statistical significance, and without simultaneously controlling for other background variables such as size and level of internationalisation. The findings reported here imply that changes in time should be interpreted cautiously, and there should be proper testing of whether or not they are statistically and practically significant. The GLMM-based approach and the use of beta distribution resulted in different estimated levels of logistics cost components than the descriptive mean values based on the data. The reason for this difference is the asymmetric nature of costs, which makes beta distribution a better modelling tool than the normally distributed measures. Moreover, multivariate modelling provides simultaneous analysis of logistics costs with several independent variables and their different interdependencies, thereby controlling for the effects and interactions of the independent variables, which in the case reported here were sometimes large. Descriptive analysis generally does not take into account the multi-dimensional nature of business. In estimates of logistics costs in two industries, for example, it ignores the fact that the companies concerned also differ in size and level of internationalisation. The implication is that traditional, one-dimensional methods should be used cautiously. The correlation structure of logistics cost changed between 2005 and 2008. All the components correlated in 2005, for example, whereas in 2008 transport costs formed an independent group. One reason for this may be that the strongest factors affecting transport costs (the development of fuel prices and freight rates) in 2008 came from outside the company, and were not attributable to strategic decisions and their effects on the cost structure. Except in the case of warehousing and indirect costs, the companies appear to have become more homogeneous in terms of logistics costs, or then the logistics costs could be determined more by external factors that are not under the control of an individual company. Evidence of this is in the declining standard deviations of total costs and transport, inventory carrying, administration, and packaging costs. The general implication is that a lot of work remains to be done in order to enhance understanding of this important yet elusive facet of logistics – namely the logistics costs. As the analysis on this article is based on only two points of time, the findings and conclusions would benefit from validation based on additional points of time.