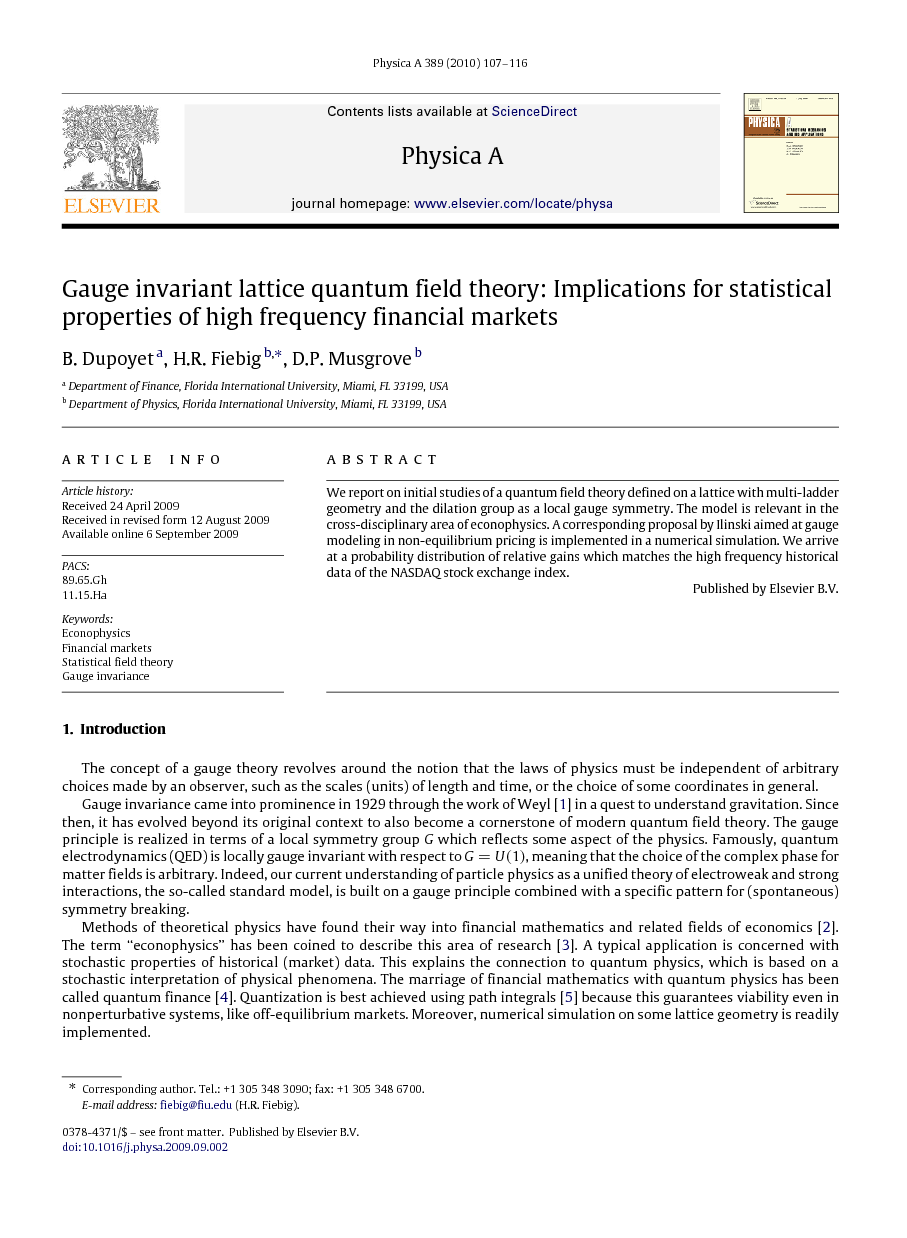 We report on initial studies of a quantum field theory defined on a lattice with multi-ladder geometry and the dilation group as a local gauge symmetry. The model is relevant in the cross-disciplinary area of econophysics. A corresponding proposal by Ilinski aimed at gauge modeling in non-equilibrium pricing is implemented in a numerical simulation. We arrive at a probability distribution of relative gains which matches the high frequency historical data of the NASDAQ stock exchange index.

The concept of a gauge theory revolves around the notion that the laws of physics must be independent of arbitrary choices made by an observer, such as the scales (units) of length and time, or the choice of some coordinates in general. Gauge invariance came into prominence in 1929 through the work of Weyl [1] in a quest to understand gravitation. Since then, it has evolved beyond its original context to also become a cornerstone of modern quantum field theory. The gauge principle is realized in terms of a local symmetry group GG which reflects some aspect of the physics. Famously, quantum electrodynamics (QED) is locally gauge invariant with respect to G=U(1)G=U(1), meaning that the choice of the complex phase for matter fields is arbitrary. Indeed, our current understanding of particle physics as a unified theory of electroweak and strong interactions, the so-called standard model, is built on a gauge principle combined with a specific pattern for (spontaneous) symmetry breaking. Methods of theoretical physics have found their way into financial mathematics and related fields of economics [2]. The term “econophysics” has been coined to describe this area of research [3]. A typical application is concerned with stochastic properties of historical (market) data. This explains the connection to quantum physics, which is based on a stochastic interpretation of physical phenomena. The marriage of financial mathematics with quantum physics has been called quantum finance [4]. Quantization is best achieved using path integrals [5] because this guarantees viability even in nonperturbative systems, like off-equilibrium markets. Moreover, numerical simulation on some lattice geometry is readily implemented. The idea of combining the gauge principle with quantum field theory in the context of econophysics has been advanced by Ilinski [6]. Its rationale is that traders in financial markets, for example, interact in similar ways with the trading environment, irrespective of the units used for the traded commodity. For example, market observables like the distribution of relative gains to an investor should be similar regardless of whether the currency unit used in the exchange is USD, Euro, Yen, or some other unit, provided that an appropriate scale factor has been applied. Empirical evidence related to this idea comes from the observation of scaling of the market data with respect to different time horizons [7], yet another scale. A somewhat independent path of using the concept of a gauge in stochastic investment models in mathematical finance has been pursued by Smith and Speed [8] and Farinelli [9]. The concepts of differential geometry and stochastic mathematics are combined in a rather formal way to yield interesting theoretical results. Comparing our and Ilinski’s [6] approaches requires a translation of terminology: The terms “deflator and term structure” refer to “gauge fields”, though in principle the concepts are similar. We prefer Ilinski’s approach over Farinelli’s, in part because it more directly lends itself to practical application. The present paper is concerned with an implementation of those ideas in the framework of a numerical simulation of a simple gauge invariant lattice quantum field theory. Subsequently, we will describe the lattice model, its interpretation in the context of financial markets, and the numerical implementation, and then proceed to matching the results to historical data of the NASDAQ stock index at one-minute intervals.

We have implemented a proposal by Ilinski, that financial market dynamics should be independent of their arbitrary units used for cash and assets, thus being describable using a local gauge theory which, in some sense, resembles quantum electrodynamics. The model relies on the dilation group R+R+ as a local gauge symmetry on a lattice multi-ladder geometry of dimension m+1m+1, where mm is the number of investment instruments coupled to a cash account, and the remaining degree of freedom represents the time evolution of the system. The numerical simulation of the model yields the probability distribution of a stochastic variable which represents the market average of relative gains of investments. It is matched to high frequency historical data of the NASDAQ index and found to reproduce these over four orders of magnitude; in particular, the empirical observation of fat tails, meaning those that exceed a normal distribution, is reproduced. In this model, the microscopic reason for this observation is traced back to the fact that a spot price of an asset is a result of the investing history: The assets offered at a particular time have been held for various amounts of time. We side with Ilinski [6] that the gauge principle is a very important feature of market dynamics, though it may not be the only one. In particular, terms correcting the lattice action, which break gauge invariance (one hopes, perturbatively), could be added to the model. These terms may account for inflation rates, dividend growth, and the like. Also, one could implement boundary conditions on the lattice model, for example the historical Federal Reserve interest rate, or the time history of specific company stock values. This is a particularly interesting avenue because of the potential of making predictions of future gains distributions. Of course, future prices cannot be predicted, but the time evolution of their probability distribution can be, at least in the short term. We close with the remark that the present model is only an, initial, exploratory attempt. No exploration of the lattice features with regard to the parameters has been made. This would include the search for phase transitions, or spontaneous symmetry breaking, for example. We shall leave this to future work.