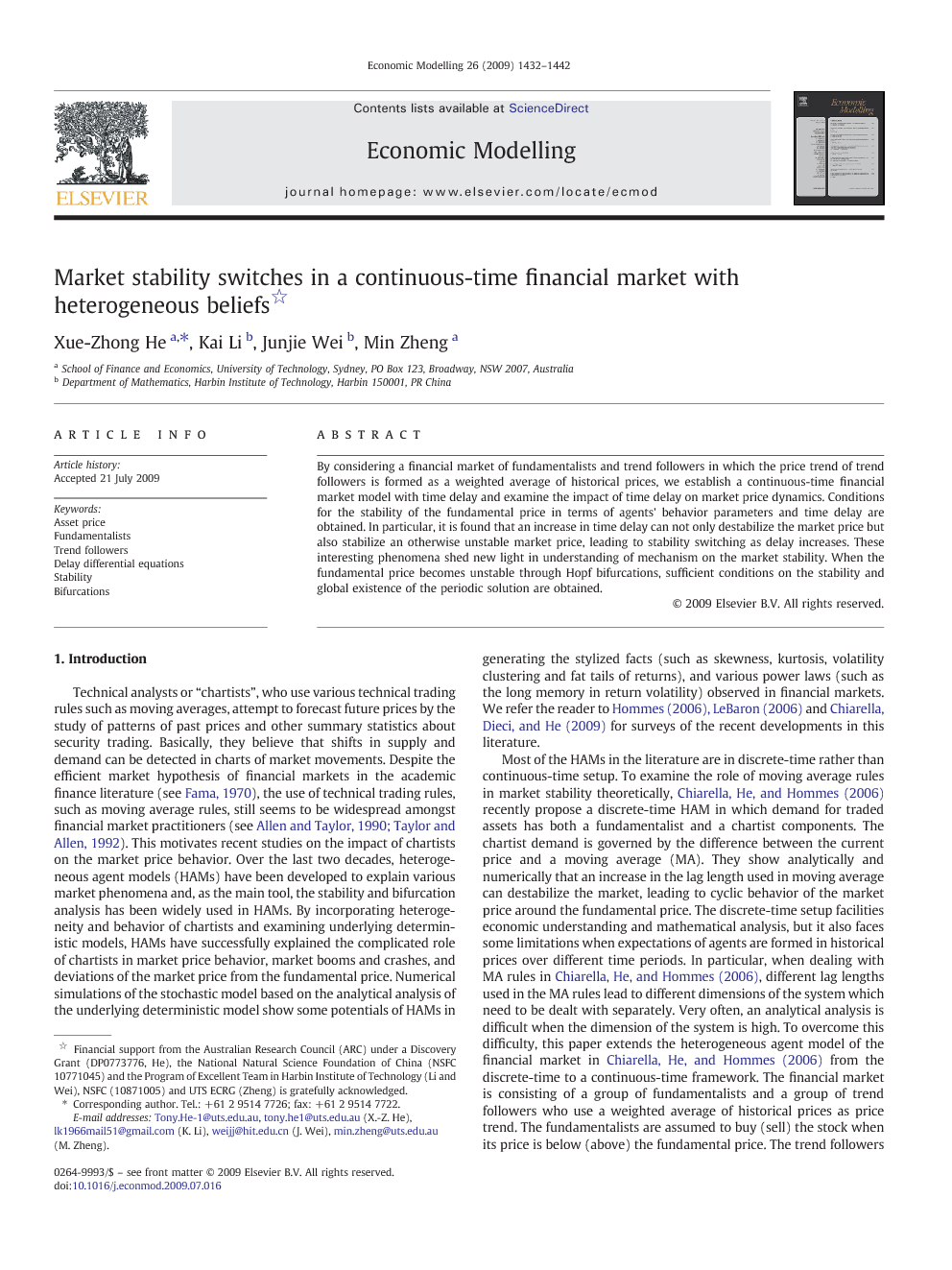 By considering a financial market of fundamentalists and trend followers in which the price trend of trend followers is formed as a weighted average of historical prices, we establish a continuous-time financial market model with time delay and examine the impact of time delay on market price dynamics. Conditions for the stability of the fundamental price in terms of agents' behavior parameters and time delay are obtained. In particular, it is found that an increase in time delay can not only destabilize the market price but also stabilize an otherwise unstable market price, leading to stability switching as delay increases. These interesting phenomena shed new light in understanding of mechanism on the market stability. When the fundamental price becomes unstable through Hopf bifurcations, sufficient conditions on the stability and global existence of the periodic solution are obtained.

This paper develops a continuous-time heterogeneous agent model when the price trend of the trend followers is formed by geometrically weighted and continuously distributed lagged prices. The model provides a unified treatment to the discrete-time HAMs where the price trend follows weighted moving average rules. However, the correspondence between the behavior of high dimensional discrete-time models and infinite dimensional continuous-time models with delays such as Eq. (2.10) may be severely limited. In particular, the stabilizing effect of an increase in time delay is apparently little known for the current discrete-time HAM literature. It is clear from the present work and the HAM literature (see for example, Chiarella et al., 2006 that, when agents use lagged information such as price to form the expectation, an increase in the time lag is potentially a destabilizing factor. However, the analysis presented in this paper shows that, under certain circumstance, a further increase in the time delay for an unstable system can stabilize the system. Furthermore, we have shown analytically and demonstrated numerically that the stability of the fundamental price can switch many times as the time delay increases. In addition, we provide some sufficient conditions on the existence and stability of periodic solution resulted from the Hopf bifurcation. The results obtained in this paper provide some newly interesting insight into the stabilizing role of the trend followers and the generating mechanism on market instability. The paper also demonstrates the advantage of continuous-time models over the discrete models and we hope the continuous-time framework established in this paper will provide an alternative approach to the current discrete-time financial market modelling with bounded rational and heterogeneous agents. In order to make the model parsimonious and to focus on the delay effect, we consider a very simple financial market with heterogeneous agents in this paper. The demand functions of the heterogeneous agents are assumed based on agents' behavior rather than on utility maximization in the standard financial economics theory. Justification and variation of the behavior demand functions using utility maximization are of interest. It is also of interest to extend the analysis to a stochastic model in which the fundamental price is driven by a stochastic process and the behavior of noise traders is taken into account. In addition, similar to the discrete-time models, the market fractions of the fundamentalists and trend followers can endogenously change when agents are allowed to switch among different types of beliefs or strategies based on certain fitness or performance measures. This paper provides a first step on the applications of delay differential equations to finance. We leave these issues for future research.