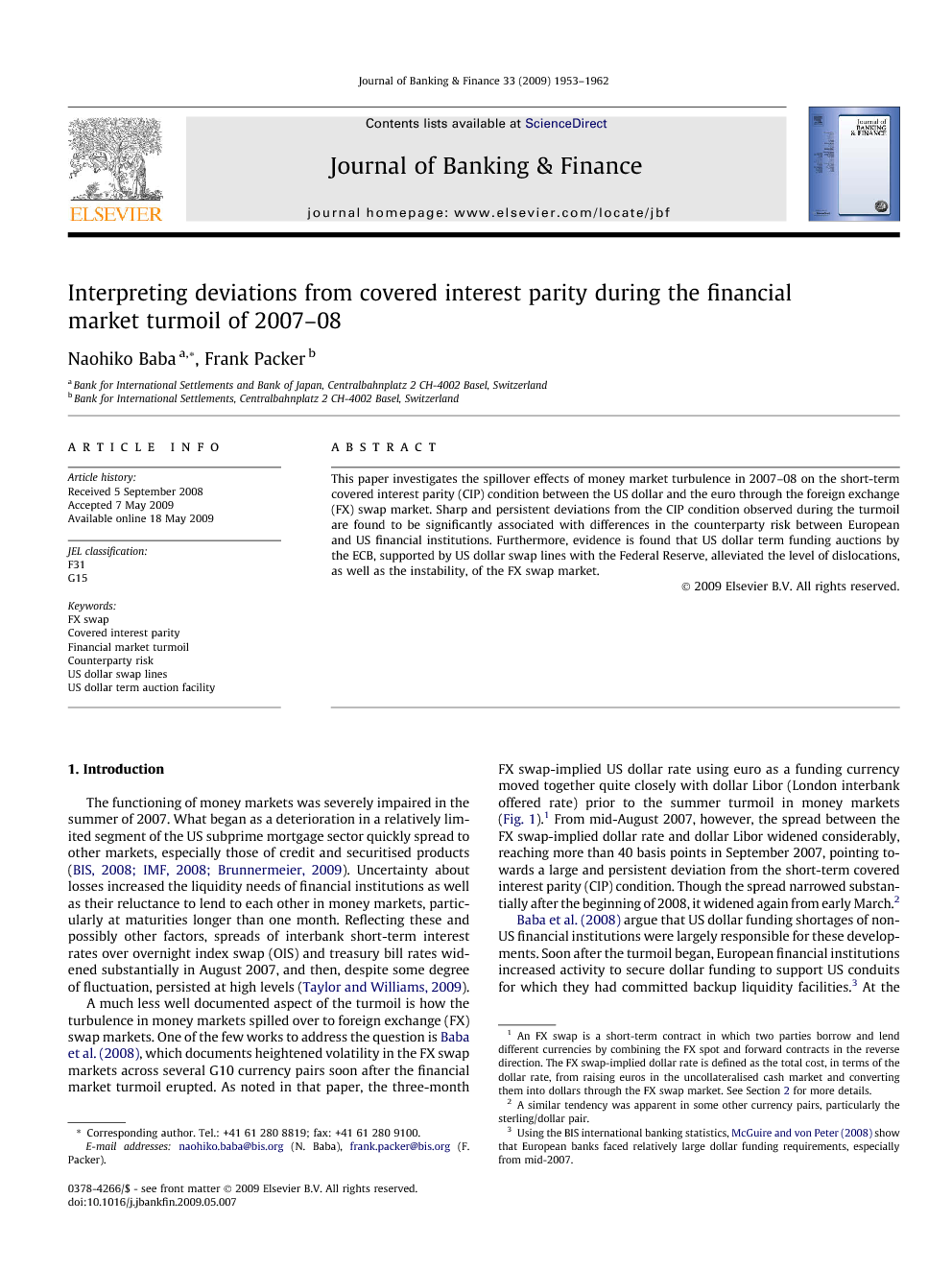 This paper investigates the spillover effects of money market turbulence in 2007–08 on the short-term covered interest parity (CIP) condition between the US dollar and the euro through the foreign exchange (FX) swap market. Sharp and persistent deviations from the CIP condition observed during the turmoil are found to be significantly associated with differences in the counterparty risk between European and US financial institutions. Furthermore, evidence is found that US dollar term funding auctions by the ECB, supported by US dollar swap lines with the Federal Reserve, alleviated the level of dislocations, as well as the instability, of the FX swap market.

The functioning of money markets was severely impaired in the summer of 2007. What began as a deterioration in a relatively limited segment of the US subprime mortgage sector quickly spread to other markets, especially those of credit and securitised products (BIS, 2008, IMF, 2008 and Brunnermeier, 2009). Uncertainty about losses increased the liquidity needs of financial institutions as well as their reluctance to lend to each other in money markets, particularly at maturities longer than one month. Reflecting these and possibly other factors, spreads of interbank short-term interest rates over overnight index swap (OIS) and treasury bill rates widened substantially in August 2007, and then, despite some degree of fluctuation, persisted at high levels (Taylor and Williams, 2009). A much less well documented aspect of the turmoil is how the turbulence in money markets spilled over to foreign exchange (FX) swap markets. One of the few works to address the question is Baba et al. (2008), which documents heightened volatility in the FX swap markets across several G10 currency pairs soon after the financial market turmoil erupted. As noted in that paper, the three-month FX swap-implied US dollar rate using euro as a funding currency moved together quite closely with dollar Libor (London interbank offered rate) prior to the summer turmoil in money markets (Fig. 1).1 From mid-August 2007, however, the spread between the FX swap-implied dollar rate and dollar Libor widened considerably, reaching more than 40 basis points in September 2007, pointing towards a large and persistent deviation from the short-term covered interest parity (CIP) condition. Though the spread narrowed substantially after the beginning of 2008, it widened again from early March.2 Full-size image (46 K) Fig. 1. Three-month FX swap-implied dollar rate from euro. (The FX swap-implied dollar rate is defined as a total cost, in terms of a dollar rate, from raising euros in the uncollateralised cash market and converting them into dollars through the FX swap market. Euro Libor is used as the uncollateralised euro cash rate.) Figure options Baba et al. (2008) argue that US dollar funding shortages of non-US financial institutions were largely responsible for these developments. Soon after the turmoil began, European financial institutions increased activity to secure dollar funding to support US conduits for which they had committed backup liquidity facilities.3 At the same time, US financial institutions appeared to become much more cautious about lending dollars to other institutions because of heightened counterparty risk and their own need to preserve funds on hand. Facing unfavourable demand and supply conditions and the associated impairment of liquidity in interbank markets, many European institutions moved to actively convert euros into US dollars through FX swaps.4 Deteriorating liquidity in the FX swap market likely contributed to further deviations of the FX swap market from the short-term CIP condition,5 despite coordinated efforts by central banks to make dollar funding more readily available to non-US financial institutions. More specifically, as part of a series of coordinated measures to provide term dollar funding, on December 12, 2007, the establishment of swap lines between the Federal Reserve and both the European Central Bank (ECB) and the Swiss National Bank (SNB) was announced. These swap lines allowed the ECB and SNB to conduct US dollar term funding auctions during European trading hours for depository institutions in continental Europe in a fashion that complemented the Federal Reserve’s own term auction facility (TAF) for US institutions.6 In this paper, we empirically investigate the above-mentioned spillover effects of the money market turmoil of 2007–08 on the FX swap market. We examine the degree to which the deviations from short-term CIP observed in the three-month FX euro/dollar swap market are associated with factors reflecting the turbulence in global financial markets. Although we control for other relevant factors, we place particular emphasis on the following two issues: (i) the role of the perception of relative counterparty risk between European and US financial institutions, and (ii) the role of the ECB’s dollar term funding auctions in easing tensions in the FX swap market. In the extant literature, a number of studies test the short-term CIP condition, and some identify the specific periods in which such parity conditions collapsed. However, to the best of our knowledge, no study analyzes explicitly the relationship between money market tensions and CIP. This paper intends to fill that gap, both in the context of the financial market turmoil and in light of the rapidly growing role of FX swaps in foreign currency funding by financial institutions globally. The rest of the paper is organized as follows. Section 2 gives an overview of the basic structure of an FX swap and its relationship to the CIP condition. Section 3 conceptually decomposes possible deviations from CIP and presents two major hypotheses. Section 4 describes the data and construction of the variables, and Section 5 provides the framework and results of the empirical analysis. Section 6 concludes the paper.

This paper has empirically investigated spillovers to the FX swap market from the money market turbulence that began in the summer of 2007. As documented in Baba et al. (2008), an important aspect of the turmoil was a shortage of dollar funding for many financial institutions, particularly European institutions that needed to support US conduits for which they had committed backup liquidity facilities. At the same time, financial institutions on the dollar-lending side became more cautious because of their own growing needs for dollar funds and increased concerns over counterparty risk. Facing these unfavourable conditions in interbank markets, non-US institutions turned to the FX swap market to convert euros into dollars. Our empirical results show a striking change in the relationship between perceptions of counterparty risk and FX swap prices after the onset of financial turmoil. That is, CDS spread differences between European and US financial institutions have a positive and statistically significant relationship with the deviations from CIP observed in the FX swap market in both three-month and one-month maturities. The result holds when we consider the CDS spreads of a range of financial institutions wider than that of the Libor panel. Our findings suggest that concern over the counterparty risk of European financial institutions relative to that of US financial institutions was one of the important drivers of the deviation from covered interest parity in the FX swap market. The results hark back to the Japan premium episode in the late 1990s, when the creditworthiness of Japanese banks had substantially deteriorated. Faced with the extreme difficulty of raising dollars in global interbank markets, Japanese banks turned to FX swap markets, which resulted in substantial deviations from CIP. The ECB’s US dollar liquidity-providing operations to Eurosystem counterparties do appear to have lowered the volatility (and thus the associated uncertainty) of the FX swap deviations in the three-month maturity, and lowered the level of the deviations at the one-month maturity. Our estimation results thus support the view that the dollar term funding auctions conducted by the ECB, backed up by dollar swap lines with the Federal Reserve, played a role in alleviating the dislocations of the euro/dollar FX swap market. This study covers a period that ends just before the bankruptcy of Lehman Brothers in September 2008. After the Lehman failure, the turmoil in many markets become much more pronounced. In currency and money markets, what had principally been a dollar liquidity problem for European financial institutions deepened into a phenomenon of global dollar shortage. The provision of dollar funds by central banks, supported in some cases by unlimited dollar swap lines with the Federal Reserve, expanded greatly. One promising line of research would focus on the effectiveness of the diverse array of policy measures taken in the more severe stage of the financial crisis following the failure of Lehman Brothers.