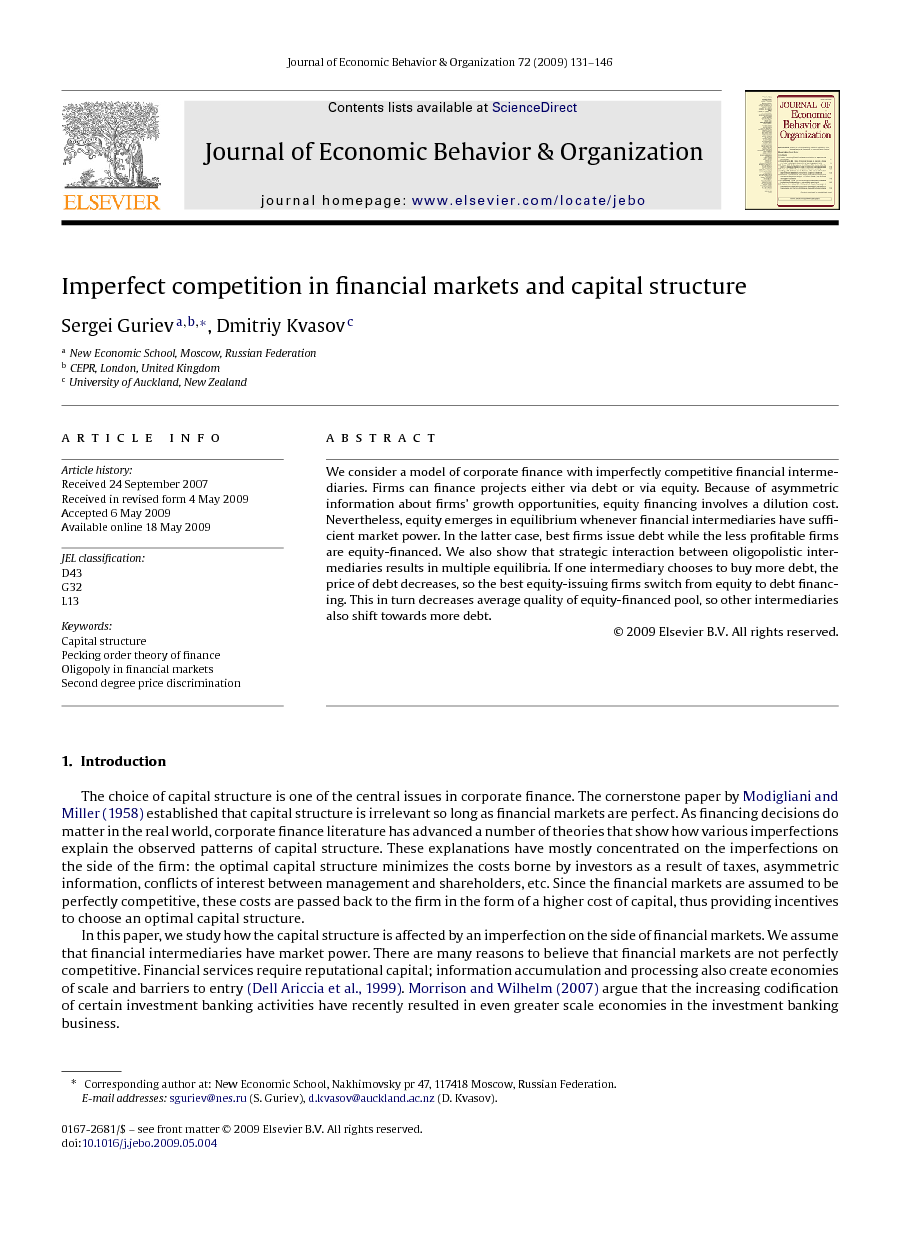 We consider a model of corporate finance with imperfectly competitive financial intermediaries. Firms can finance projects either via debt or via equity. Because of asymmetric information about firms’ growth opportunities, equity financing involves a dilution cost. Nevertheless, equity emerges in equilibrium whenever financial intermediaries have sufficient market power. In the latter case, best firms issue debt while the less profitable firms are equity-financed. We also show that strategic interaction between oligopolistic intermediaries results in multiple equilibria. If one intermediary chooses to buy more debt, the price of debt decreases, so the best equity-issuing firms switch from equity to debt financing. This in turn decreases average quality of equity-financed pool, so other intermediaries also shift towards more debt.

This paper studies a model of imperfect competition in financial markets with endogenous capital structure. The model builds on the pecking order theory of capital structure that assumes that firms are better informed about their growth opportunities than outside investors. An issue of equity sends investors a negative signal about the firm’s quality; the cost of equity financing is always higher than that of debt finance. Therefore, in the absence of the costs of financial distress the firms should finance their investment via internal funds or debt. Such a conclusion, however, hinges on the assumption that financial markets are perfectly competitive, so that all the imperfections of equity finance are automatically passed back to the firm in the form of a higher cost of capital. We show that when financial markets are concentrated, this does not have to be the case: returns on equity and debt may differ. In the presence of oligopoly in financial markets, some firms issue equity even if there are no costs associated with debt financing. The intuition is straightforward: oligopolistic financial intermediaries set interest rate on debt above their cost of funds. Hence, there are firms that would be financed in a perfectly competitive economy but who cannot afford to borrow under oligopoly. The intermediaries are happy to finance these firms but do not like to lower interest rates for their more profitable debtors. Capital structure emerges as an effective tool for the (second degree) price discrimination: the most profitable firms prefer to be financed via debt rather than switch to equity. An important implication of our analysis is the multiplicity of equilibria due to strategic interaction between oligopolistic financial intermediaries. The intermediaries’ portfolio choices are strategic complements: if one intermediary moves from debt- to equity-holding, others find it profitable to follow. When a large intermediary reduces lending and invests more in equity, the interest rate on debt goes up. Hence, some firms that used to be financed via debt have to switch to equity financing. As the marginal equity-financed firms are always better than the average equity-financed firms, this improves the expected returns on equity. Therefore investing in equity becomes relatively more attractive to other investors as well. The strategic complementarity also results in multiplicity of equilibria. It is important to note that there are no bubbles in the model: investors price each stock based on the rationally updated expectations of this stock’s returns. However, the returns are endogenous and are not uniquely determined given the multiplicity of equilibria. Our model suggest that there can be multiple equilibrium levels of stock prices based on fundamentals – and, therefore, sustainable in the long run. In order to fully explore the stock price dynamics a multi-period setup is needed, which is an exciting avenue for further research. While we develop implications for the multiple equilibria in a public stock market, our model if taken literally is a model of an entrepreneur raising capital for a new project. While our intuition is not constrained to this case, a few formal extensions are due to make the argument more convincing: first, one would need to consider the case with assets in place prior to raising new funds, second, consider secondary markets for stocks, and third, introduce a conflict between management and initial shareholders (see Dybvig and Zender, 1991 for the implications of the latter for the validity of the pecking order theory).