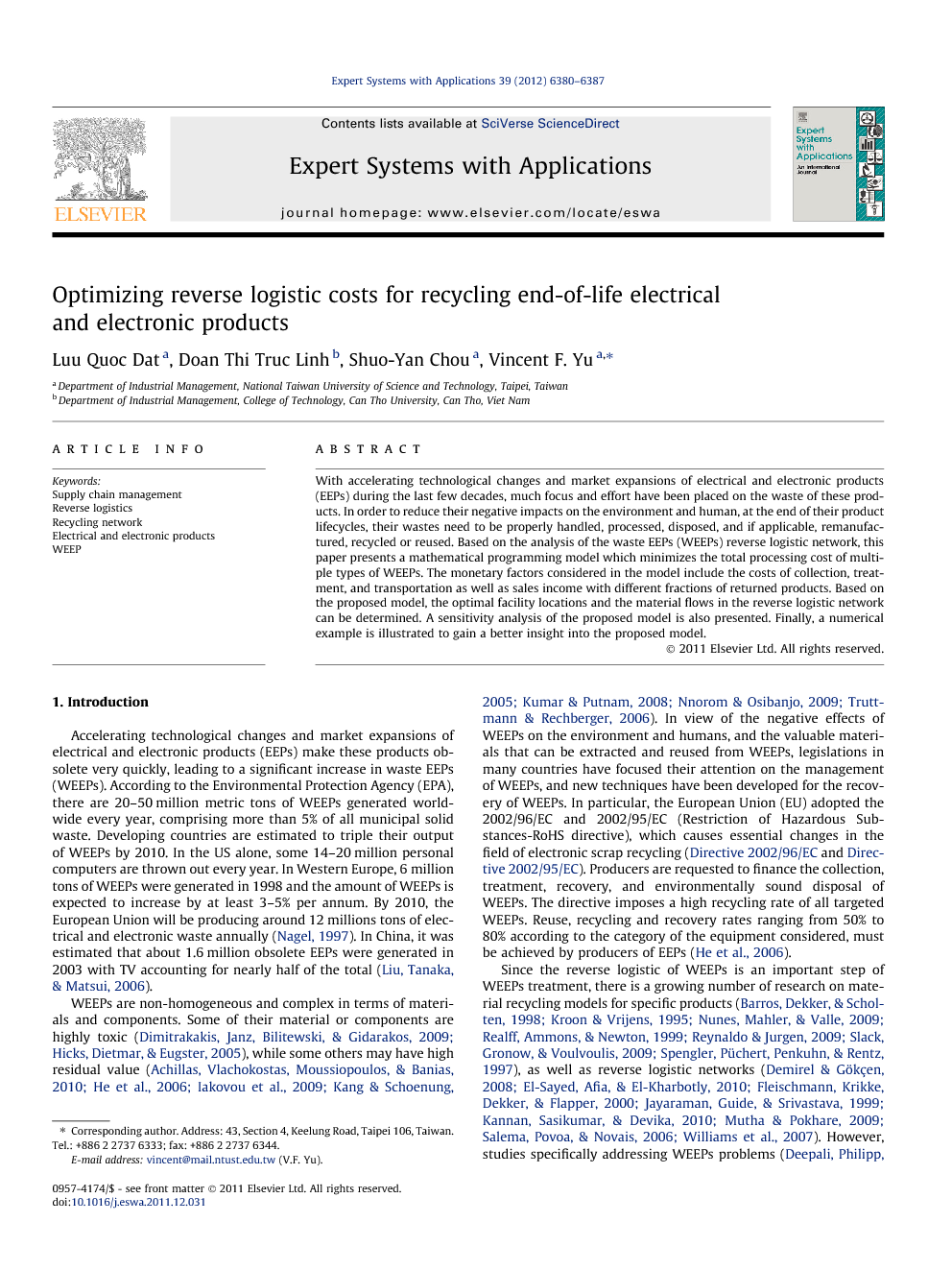 With accelerating technological changes and market expansions of electrical and electronic products (EEPs) during the last few decades, much focus and effort have been placed on the waste of these products. In order to reduce their negative impacts on the environment and human, at the end of their product lifecycles, their wastes need to be properly handled, processed, disposed, and if applicable, remanufactured, recycled or reused. Based on the analysis of the waste EEPs (WEEPs) reverse logistic network, this paper presents a mathematical programming model which minimizes the total processing cost of multiple types of WEEPs. The monetary factors considered in the model include the costs of collection, treatment, and transportation as well as sales income with different fractions of returned products. Based on the proposed model, the optimal facility locations and the material flows in the reverse logistic network can be determined. A sensitivity analysis of the proposed model is also presented. Finally, a numerical example is illustrated to gain a better insight into the proposed model.

Accelerating technological changes and market expansions of electrical and electronic products (EEPs) make these products obsolete very quickly, leading to a significant increase in waste EEPs (WEEPs). According to the Environmental Protection Agency (EPA), there are 20–50 million metric tons of WEEPs generated worldwide every year, comprising more than 5% of all municipal solid waste. Developing countries are estimated to triple their output of WEEPs by 2010. In the US alone, some 14–20 million personal computers are thrown out every year. In Western Europe, 6 million tons of WEEPs were generated in 1998 and the amount of WEEPs is expected to increase by at least 3–5% per annum. By 2010, the European Union will be producing around 12 millions tons of electrical and electronic waste annually (Nagel, 1997). In China, it was estimated that about 1.6 million obsolete EEPs were generated in 2003 with TV accounting for nearly half of the total (Liu, Tanaka, & Matsui, 2006). WEEPs are non-homogeneous and complex in terms of materials and components. Some of their material or components are highly toxic (Dimitrakakis et al., 2009 and Hicks et al., 2005), while some others may have high residual value (Achillas et al., 2010, He et al., 2006, Iakovou et al., 2009, Kang and Schoenung, 2005, Kumar and Putnam, 2008, Nnorom and Osibanjo, 2009 and Truttmann and Rechberger, 2006). In view of the negative effects of WEEPs on the environment and humans, and the valuable materials that can be extracted and reused from WEEPs, legislations in many countries have focused their attention on the management of WEEPs, and new techniques have been developed for the recovery of WEEPs. In particular, the European Union (EU) adopted the 2002/96/EC and 2002/95/EC (Restriction of Hazardous Substances-RoHS directive), which causes essential changes in the field of electronic scrap recycling (Directive 2002/96/EC and Directive 2002/95/EC). Producers are requested to finance the collection, treatment, recovery, and environmentally sound disposal of WEEPs. The directive imposes a high recycling rate of all targeted WEEPs. Reuse, recycling and recovery rates ranging from 50% to 80% according to the category of the equipment considered, must be achieved by producers of EEPs (He et al., 2006). Since the reverse logistic of WEEPs is an important step of WEEPs treatment, there is a growing number of research on material recycling models for specific products (Barros et al., 1998, Kroon and Vrijens, 1995, Nunes et al., 2009, Realff et al., 1999, Reynaldo and Jurgen, 2009, Slack et al., 2009 and Spengler et al., 1997), as well as reverse logistic networks (Demirel and Gökçen, 2008, El-Sayed et al., 2010, Fleischmann et al., 2000, Jayaraman et al., 1999, Kannan et al., 2010, Mutha and Pokhare, 2009, Salema et al., 2006 and Williams et al., 2007). However, studies specifically addressing WEEPs problems (Deepali et al., 2005, Geraldo and Chang, 2010, Grunow and Gobbi, 2009, Jang and Kim, 2010, Lee et al., 2000, Liu et al., 2006 and Rahimifard et al., 2009) are rare and still limited to some specific areas of WEEPs reverse logistics. Therefore, this paper presents a mathematical model for multi-products reverse logistic network so that the total reverse logistic cost can be minimized. The monetary factors considered in the model include the cost of collection, treatment, and transportation as well as sales income from returned products. Based on the proposed model, the optimal facility locations and the material flows in the reverse logistic network can be determined. The rest of the paper is organized as follows. The reverse logistic network model is proposed in Section 2. Section 3 contains the mathematical formulation of the model. The proposed model is illustrated through an example in Section 4. Finally, conclusions are provided in Section 5.