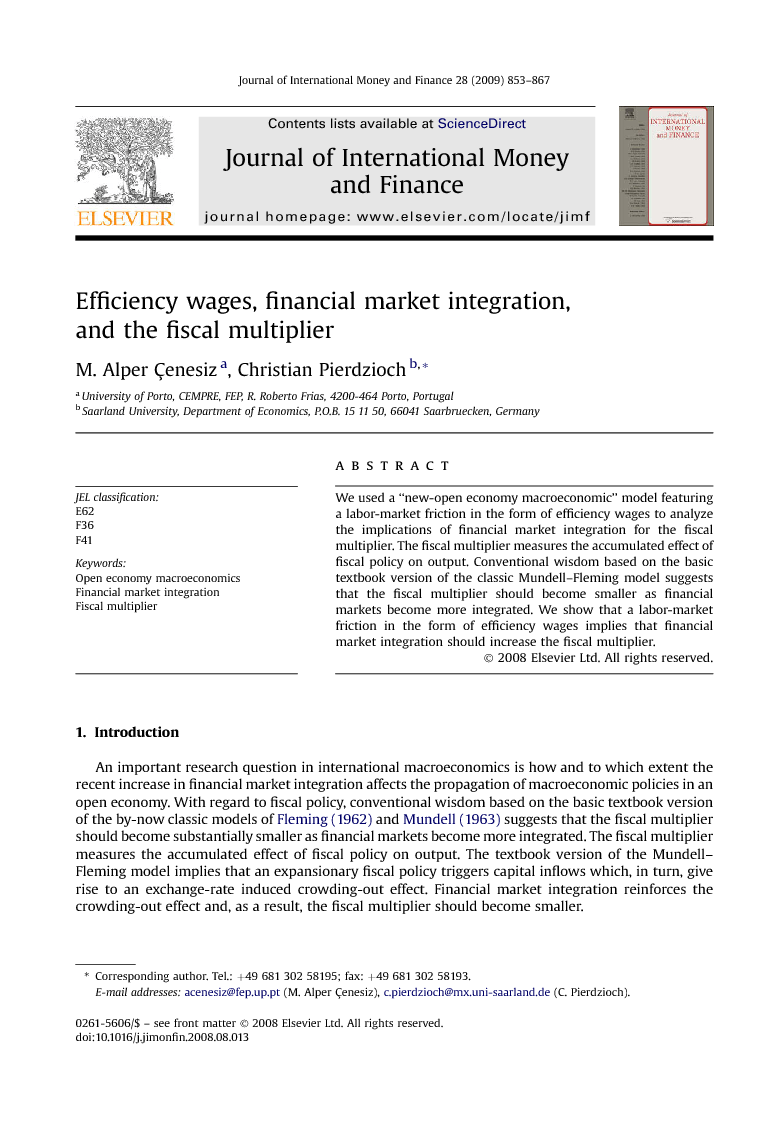 An important research question in international macroeconomics is how and to which extent the recent increase in financial market integration affects the propagation of macroeconomic policies in an open economy. With regard to fiscal policy, conventional wisdom based on the basic textbook version of the by-now classic models of Fleming (1962) and Mundell (1963) suggests that the fiscal multiplier should become substantially smaller as financial markets become more integrated. The fiscal multiplier measures the accumulated effect of fiscal policy on output. The textbook version of the Mundell–Fleming model implies that an expansionary fiscal policy triggers capital inflows which, in turn, give rise to an exchange-rate induced crowding-out effect. Financial market integration reinforces the crowding-out effect and, as a result, the fiscal multiplier should become smaller. The Mundell–Fleming model was, for a long time, the standard model for analyzing the implications of macroeconomic policies in an open economy. In recent years, however, it has been largely replaced by the type of “new-open economy macroeconomic” (NOEM) models developed by Obstfeld and Rogoff (1995). NOEM models are macroeconomic dynamic general equilibrium models with a solid microeconomic foundation. Their microeconomic foundation renders it possible to take into account the intertemporal budget constraint and the dynamic optimization of the private sector when analyzing the propagation of fiscal policy in an open economy. Recently, Sutherland (1996) and Senay (1998) have used variants of the prototype NOEM model developed by Obstfeld and Rogoff (1995) to argue that financial market integration should diminish the output effect of fiscal policy. In contrast to the textbook Mundell–Fleming model, most of the NOEM models that have been analyzed in the recent literature are built on the assumption that the labor market can be described in Walrasian terms. In a Walrasian labor market, wages adjust rapidly, households are always on their labor supply schedule, and structural unemployment is absent. As a consequence, these models have problems to account for the stylized facts of real-world labor markets. For example, they cannot account for the fact that in many economies, and at almost any time, many households are unemployed. Moreover, these models cannot explain the empirically observed low correlation between real wages and employment, the high variability of employment relative to that of real wages, and the low procyclicity of real wages. We extended the NOEM model developed by Obstfeld and Rogoff (1995) to incorporate a non-Walrasian labor market. To this end, we followed Collard and de la Croix (2000) and Danthine and Kurmann (2004) in resorting to the “gift-exchange” efficiency-wage theory tracing back to the research of Akerlof (1982). According to the “gift-exchange” efficiency-wage theory, workers dislike effort. They are, however, willing to provide effort beyond some reference level of effort (the gift of workers) if they feel that their firm treats them well. In order to motivate workers to provide a higher level of effort, firms respond to the behavior of workers by offering a wage above the Walrasian market-clearing wage (the gift of the firm). Thus, the assumption that wages are set according to efficiency-wage considerations implies that the optimizing behavior of workers and firms results in structural unemployment. We found that adding the assumption of efficiency wages to an otherwise standard NOEM model has substantial implications for the effect of financial market integration on the fiscal multiplier in an open economy. In line with the results of recent research by Dellas et al. (2005), our efficiency-wage model implies that financial market integration should increase the fiscal multiplier. This implication of our model is in contrast to the implications of the NOEM models used by Sutherland (1996) and Senay (1998). It is also in contrast to the conventional wisdom derived from the basic textbook version of the Mundell–Fleming model. The implication of our model, however, is in line with extensions of the Mundell–Fleming model that feature real-wage rigidities (Sachs, 1980). In order to derive the implications of our efficiency-wage model, we lay out in Section 2 the structure of our NOEM model. We report in Section 3 the results of numerical simulations of our model. We report the results of some robustness checks in Section 4. For the purpose of comparison, we briefly analyze the implications of our efficiency-wage model for monetary and productivity shocks in Section 5. We offer some concluding remarks in Section 6.

Before general policy-relevant conclusions and empirically testable hypotheses can be derived from the type of analysis we have undertaken in this paper, much more research on the link between the structure of labor markets, financial market integration, and the fiscal multiplier needs to be done. For example, we have reported results for the relatively simple two-country Obstfeld–Rogoff model. Their model has been extended in a number of dimensions to account for the stylized facts of international business cycles. Betts and Devereux (2000) have extended the model to incorporate pricing-to-market of firms, and Ganelli (2003) has extended the model to incorporate useful government spending. It would be interesting to analyze in future research how these extensions of the Obstfeld–Rogoff model interact with efficiency wages in shaping the changes in the fiscal multiplier that occur in the wake of financial market integration. It is also important to note that we have focused in our analysis on one specific labor-market rigidity: the “gift-exchange” efficiency-wage theory. Other efficiency-wage theories have been analyzed in the literature (Danthine and Donaldson, 1990). Exploring in future research the implications of other efficiency-wage theories for the link between financial market integration and the fiscal multiplier is likely to yield significant insights. Finally, other forms of labor-market frictions than efficiency wages may have interesting implications for the way financial market integration affects the fiscal multiplier in NOEM models. For example, in the recent literature, theories of labor-market search have received considerable attention. Hairault (2002) and Walsh (2005) have analyzed the business-cycle implications of such theories in dynamic general equilibrium models. The analysis of the potentially complex links between search frictions in the labor market, financial market integration, and the fiscal multiplier is a challenging task that awaits future research.