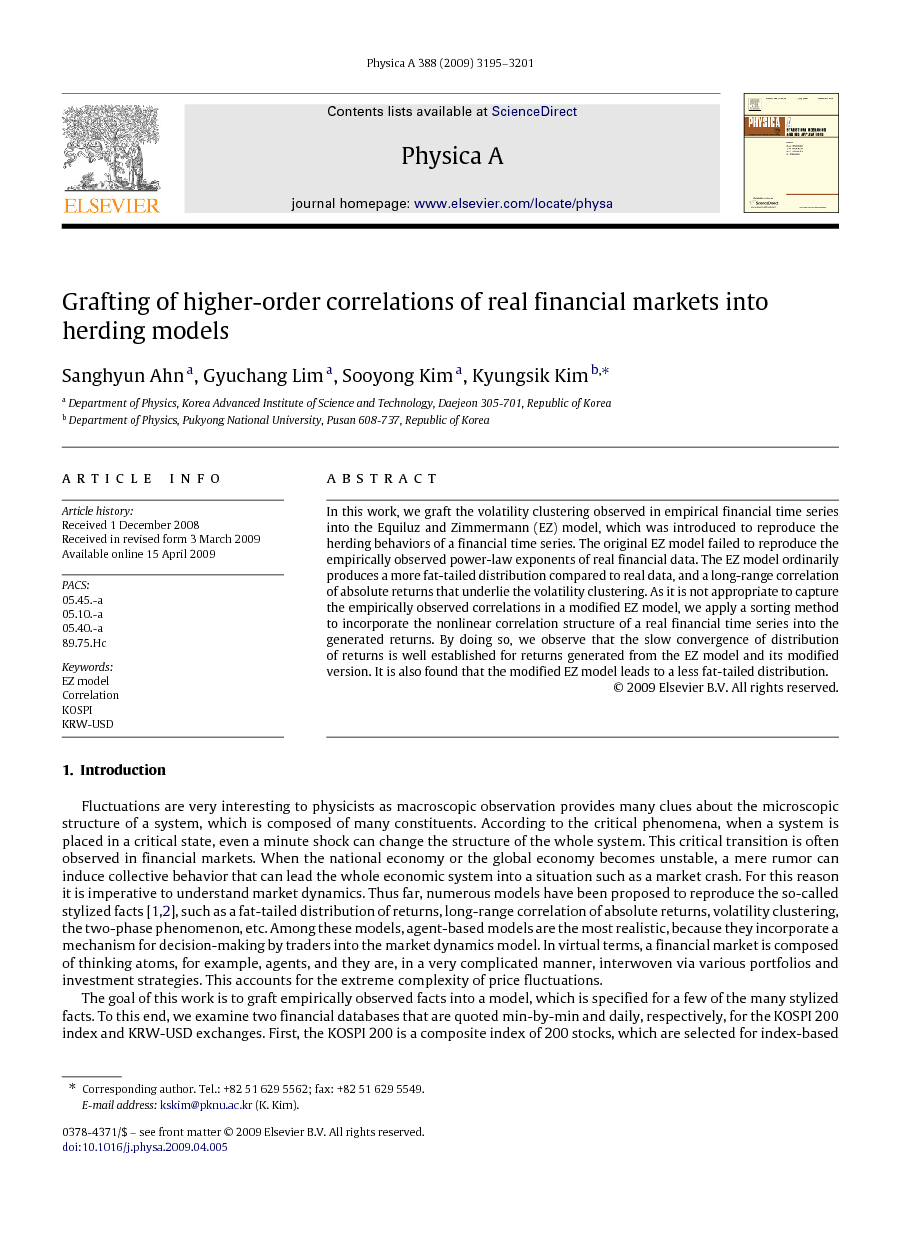 In this work, we graft the volatility clustering observed in empirical financial time series into the Equiluz and Zimmermann (EZ) model, which was introduced to reproduce the herding behaviors of a financial time series. The original EZ model failed to reproduce the empirically observed power-law exponents of real financial data. The EZ model ordinarily produces a more fat-tailed distribution compared to real data, and a long-range correlation of absolute returns that underlie the volatility clustering. As it is not appropriate to capture the empirically observed correlations in a modified EZ model, we apply a sorting method to incorporate the nonlinear correlation structure of a real financial time series into the generated returns. By doing so, we observe that the slow convergence of distribution of returns is well established for returns generated from the EZ model and its modified version. It is also found that the modified EZ model leads to a less fat-tailed distribution.

Fluctuations are very interesting to physicists as macroscopic observation provides many clues about the microscopic structure of a system, which is composed of many constituents. According to the critical phenomena, when a system is placed in a critical state, even a minute shock can change the structure of the whole system. This critical transition is often observed in financial markets. When the national economy or the global economy becomes unstable, a mere rumor can induce collective behavior that can lead the whole economic system into a situation such as a market crash. For this reason it is imperative to understand market dynamics. Thus far, numerous models have been proposed to reproduce the so-called stylized facts [1] and [2], such as a fat-tailed distribution of returns, long-range correlation of absolute returns, volatility clustering, the two-phase phenomenon, etc. Among these models, agent-based models are the most realistic, because they incorporate a mechanism for decision-making by traders into the market dynamics model. In virtual terms, a financial market is composed of thinking atoms, for example, agents, and they are, in a very complicated manner, interwoven via various portfolios and investment strategies. This accounts for the extreme complexity of price fluctuations. The goal of this work is to graft empirically observed facts into a model, which is specified for a few of the many stylized facts. To this end, we examine two financial databases that are quoted min-by-min and daily, respectively, for the KOSPI 200 index and KRW-USD exchanges. First, the KOSPI 200 is a composite index of 200 stocks, which are selected for index-based derivatives, such as futures and options, and covers the period from March through October of 2004. KRW-USD exchanges cover the period from 1981 through 2004. From these databases, we extract the nonlinear temporal correlations and graft them onto the time series generated from an EZ model. Furthermore, for comparison, we present a modified EZ model that incorporates the sustaining of activated clusters. This modification leads to a less fat-tailed cumulative distribution. The organization of this paper is as follows. In the following section, some stylized facts of our databases, such as the fat-tailed distribution of returns and long-range correlation of absolute returns, are presented. The effects of nonlinear correlation between price fluctuations on the slow decay to a Gaussian distribution are examined in terms of scaling of the moments [3]. In Section 3, a brief description of a pure EZ model is presented and a modified version is proposed, and numerical results are given. Section 4 presents concluding remarks.

In this work, we have shown that empirical features of real returns are considerably different from those noted in other works [3], [5] and [6]. In particular, for the case of the KRW-USD exchanges, it was found that the power-law exponent of the complementary cumulative distribution functions of returns is well inside the regime of Levy stable distributions. As shown in Fig. 4, the collapse of power-law scaling into a single curve is clearly exhibited as the lag time View the MathML sourceΔt increases. This is likely due to a market-specific property. In particular, the KRW-USD exchanges are greatly affected by the Asian financial crisis in 1997. The universal property of distributions of returns over financial markets appears to be implausible. Also, by introducing a modification to the naive EZ model, we changed the power exponent of the distribution of returns such that it became larger, resulting in a less fat-tailed distribution. The second major result of this study is the synergetic effect of a model approach and a real data analysis. By attaching the nonlinear correlation structure of real financial data to the simulated returns from the model, herein the EZ model [7], and its modified version, slow convergence to a Gaussian behavior is explicitly observed in terms of scaling of moments. This additional algorithm of nonlinear correlations can be useful for generating many simulated returns, which are closer to the stylized features of real financial databases.