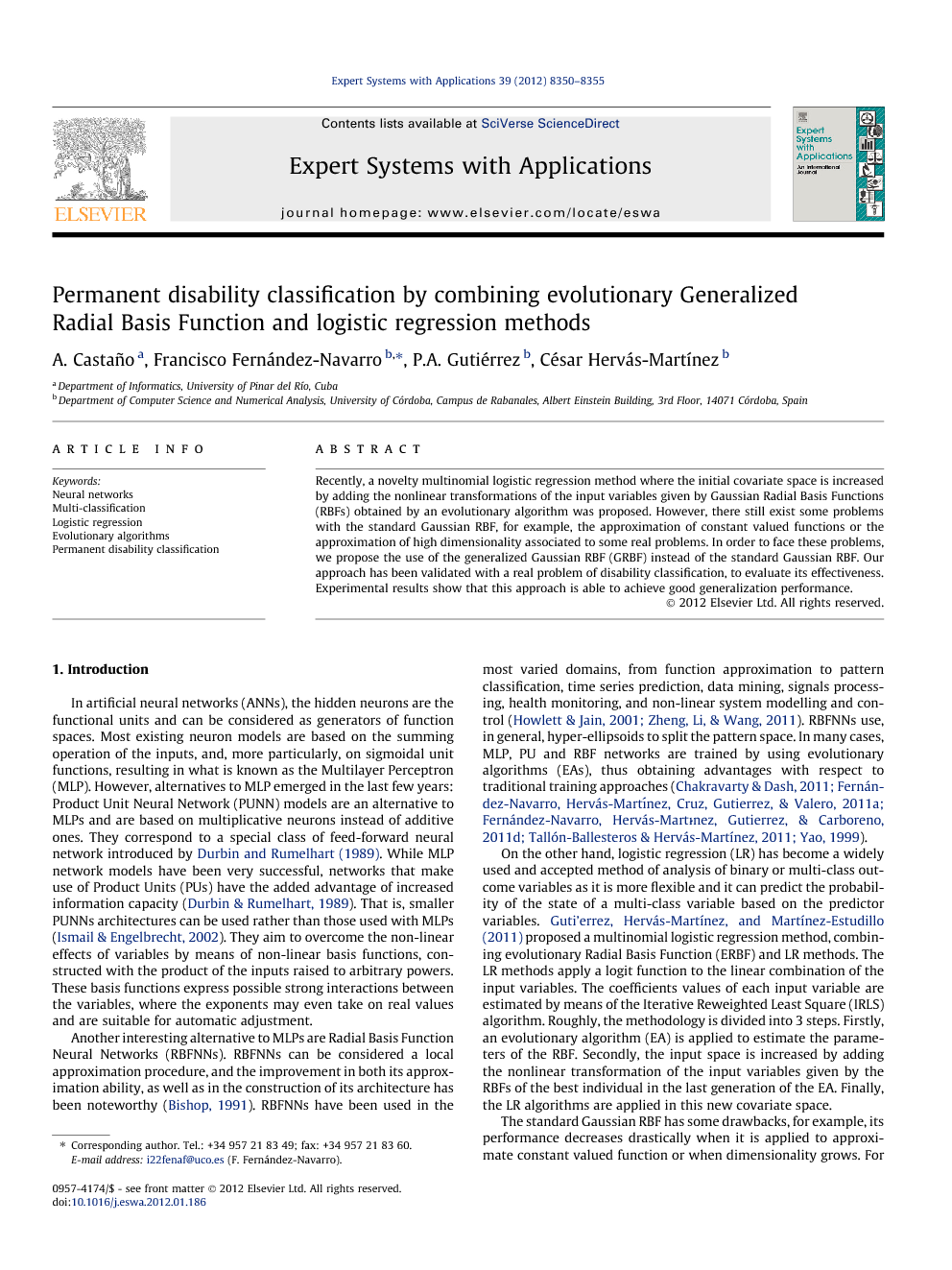 Recently, a novelty multinomial logistic regression method where the initial covariate space is increased by adding the nonlinear transformations of the input variables given by Gaussian Radial Basis Functions (RBFs) obtained by an evolutionary algorithm was proposed. However, there still exist some problems with the standard Gaussian RBF, for example, the approximation of constant valued functions or the approximation of high dimensionality associated to some real problems. In order to face these problems, we propose the use of the generalized Gaussian RBF (GRBF) instead of the standard Gaussian RBF. Our approach has been validated with a real problem of disability classification, to evaluate its effectiveness. Experimental results show that this approach is able to achieve good generalization performance.

We have study the combination of Evolutionary Generalized Radial Basis Function instead of Evolutionary Radial Basis Function and logistic regression methods. This basis function solve some problems that lacks the performance of the standard Gaussian model, such as the approximation of constant valued function or the approximation of high dimensionality datasets. The good synergy between these two techniques has been experimentally proved using a permanent disability classification problem. The hybrid neuro-logistic models have proved to serve as an accurate tool in the classification of permanent disability. A comparative study between an extensive collection of standard classifiers and the results of the statistical tests applied, and the hybrid neuro-logistic models shows that the latter are more precise in determining the degree of permanent disability. Our hybrid models include a non-linear component (from different kinds of neural networks) and a standard linear component, combining both in a logistic regression predictor. The complexity of the model and the high amount of parameters involved in these classifiers encouraged us to use a combined methodology, including an evolutionary algorithm and a standard maximum-likelihood optimization process. Useful information could be extracted from the most accurate model, given its simple structure (number of connections and number of hidden neurons). Simple structure is one of the main advantages of the models presented. The obtained model is not intended to be a widely used tool in the classification of permanent disability. First, it would be necessary to examine more data as the scope of the PD problem is very broad due to the high number and complexity of cases. However, our findings can be used to develop new, improved systems. For instance, an extended model could be used to create an information system, both for patients and professionals, which would provide assistance in the evaluation of permanent disability.