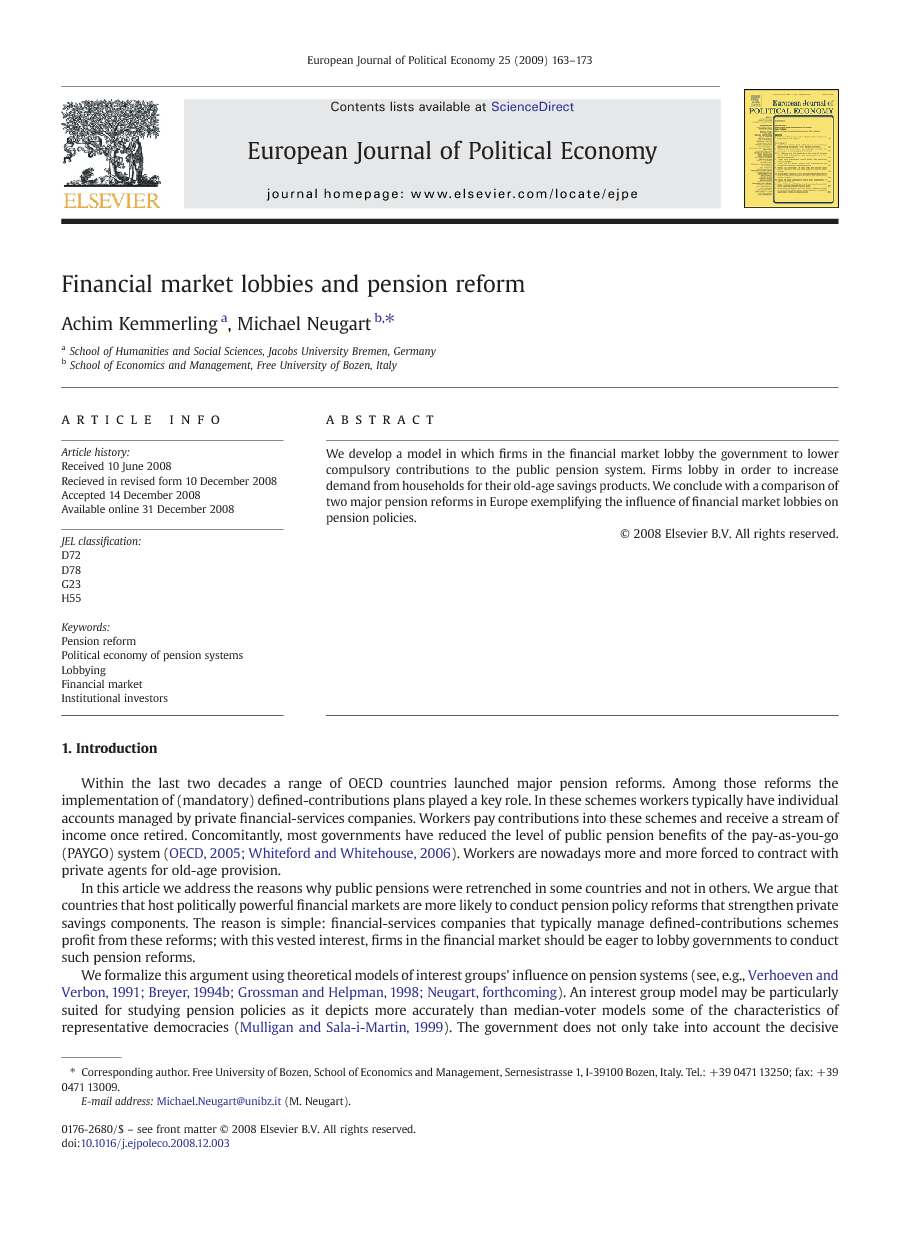 We develop a model in which firms in the financial market lobby the government to lower compulsory contributions to the public pension system. Firms lobby in order to increase demand from households for their old-age savings products. We conclude with a comparison of two major pension reforms in Europe exemplifying the influence of financial market lobbies on pension policies.

Within the last two decades a range of OECD countries launched major pension reforms. Among those reforms the implementation of (mandatory) defined-contributions plans played a key role. In these schemes workers typically have individual accounts managed by private financial-services companies. Workers pay contributions into these schemes and receive a stream of income once retired. Concomitantly, most governments have reduced the level of public pension benefits of the pay-as-you-go (PAYGO) system (OECD, 2005 and Whiteford and Whitehouse, 2006). Workers are nowadays more and more forced to contract with private agents for old-age provision. In this article we address the reasons why public pensions were retrenched in some countries and not in others. We argue that countries that host politically powerful financial markets are more likely to conduct pension policy reforms that strengthen private savings components. The reason is simple: financial-services companies that typically manage defined-contributions schemes profit from these reforms; with this vested interest, firms in the financial market should be eager to lobby governments to conduct such pension reforms. We formalize this argument using theoretical models of interest groups' influence on pension systems (see, e.g., Verhoeven and Verbon, 1991, Breyer, 1994b, Grossman and Helpman, 1998 and Neugart, forthcoming). An interest group model may be particularly suited for studying pension policies as it depicts more accurately than median-voter models some of the characteristics of representative democracies (Mulligan and Sala-i-Martin, 1999). The government does not only take into account the decisive voter's policy preferences but also has to balance contradictory claims from various societal actors. We extend the existing formal approaches analyzing pension policies by introducing financial-service companies that lobby the government. These lobbyists try to push governments to reduce the contribution rate to the PAYGO system. This induces more private savings from households and increases the demand for products of the financial-service companies. We motivate our argument by looking more closely at time and cross-country correlates of net-replacement rates of pension systems, the scope of the financial markets, and pension reforms for OECD countries. These descriptive statistics prompt us to analyze more deeply the interplay between financial market lobbies and governments' pension policies. We focus on a causal mechanism that has hitherto been somewhat neglected, namely that governments distort policies in favor of the financial market interests in exchange for some sort of favor that they receive from these lobbyists. To support our formal approach on governments' pension policies empirically, we present two case studies for the U.K. and Germany. Both of these case studies show how financial market lobbies shaped the policymaking of the governments to various degrees at those times. A better organized financial market lobby having better access to the ruling parties can explain the stronger shift towards private components in retirement provision in the U.K. than in Germany. The literature on the political economy of pension systems has usually focused on other factors than financial markets to explain characteristics of social security systems (see, e.g., the surveys by Breyer, 1994a and Galasso and Profeta, 2002). In this literature, changes in the generosity of public pension schemes are, for example, explained on the basis of demographics which have shifted the median voter (Sinn and Übelmesser, 2003), inequality in the electorate and the quest for redistribution (Tabellini, 2000), or the ability of the older generation to effectively organize their interests (Profeta, 2002). Recently, Conde-Ruiz and Profeta (2007) focus on a more complex design of pension systems. They build a model to explain both the generosity of public pension systems and their redistributive characteristics. They argue that middle income voters face lower returns from private savings in the financial market than high income voters which, depending on income inequality, may lead to different coalitions of voters supporting either a Bismarckian or a Beveridgean type of pension system. However, as for the general role of the financial market normative assessments of pension reforms prevail (see, e.g., the survey by Lindbeck and Persson, 2003). The political role of financial markets goes largely unnoticed. This is remarkable given the commonly held belief that financial markets benefit greatly from the introduction of privatized mandatory pension schemes (see, e.g., World Bank, 1994). Empirical studies on pension reforms based on micro-data highlight the fact that voters are more likely to accept reforms if they are better informed about the costs and particularities of the pension system (Boeri and Tabellini, 2005). Using aggregate data, Perotti and Schwienbacher (2007) present some evidence for their claim that the degree to which the middle class participates in financial markets explains the initial choice of the type of the pension system. A higher concentration of wealth among a small group of the society will shape, as they argue, the preferences of the decisive middle class towards a more redistributive public pension scheme. Brooks (2002) finds that problem pressure measured as implicit public debt and political variables such as democracy or the effective number of parties exert an effect on the likelihood of a reform. There is also evidence that countries learn from the reform processes of other countries (Brooks, 2005). Finally, case studies by Immergut et al. (2007) and Myles and Pierson (2001) reveal the role of political party competition and of institutional veto players in recent privatizations of pension systems in Europe. In the following section we start with some stylized facts on public vs. private pension systems in the OECD world. Next, we set-up an overlapping-generations model in which financial-service companies lobby a government's choice of the contribution rate to a PAYGO system. Then we test the validity of our claims by comparing two cases of privatization of pension systems: the United Kingdom in 1986 and Germany in 2001. The last section concludes.

Since the mid eighties, a range of OECD countries reformed their public pension system. A frequent measure was to introduce defined-contributions schemes. Descriptive evidence reveals that these reforms coincided with less generous public pensions and larger financial markets. We argued that lobbying by financial-service companies explains part of these pension reforms. Putting our argument in more formal terms we extended an overlapping generations model with financial market companies that lobby the government. Lobbyists want a cut of the public pension funds to increase private savings of households. Higher private savings are advantageous for the financial intermediaries as this increases the scope of the market for their products. As reliable measures for lobbying are hard to come by in a cross-country perspective we collected evidence on two reform cases. For the British pension reform in 1986 and the German reform of 2001 it is evident that lobbying of financial market intermediaries was substantial. This holds true even after taking competing explanations into account. We also see that the evidence for lobbying is stronger in the U.K. than in Germany which is in line with the underlying variation in the scope of the implemented pension reform. Our model only considers lobbies from the financial market. The case studies mentioned other lobbyists holding opposite policy stances were involved at the time when governments' drafted the pension reforms. While an extension of the model with other lobbying groups would be feasible, the essence of our argument would arguably remain. Given activities of other societal actors or potentially other sources of variance perhaps related to voting systems, legislative procedures and the like, stronger influence of lobbyists on governments' policy-making would lead to less generous public pension systems and an increase in private savings. Nevertheless our approach is a simplification in many respects. The overlapping generations model, for example, only distinguishes between a simple PAYGO pension system and private savings of households for old-age provision. We only focus on the contribution rate or, given the age-structure of the population, the replacement rate as the major policy instrument. We are aware of the fact that many more policy parameters exist that deserve attention in a positive political economics approach to pension policies. And in fact, governments are very creative in that respect as recently documented by OECD (2007). Notwithstanding, we believe that our simple model enriches our understanding of the political forces behind pension reforms.