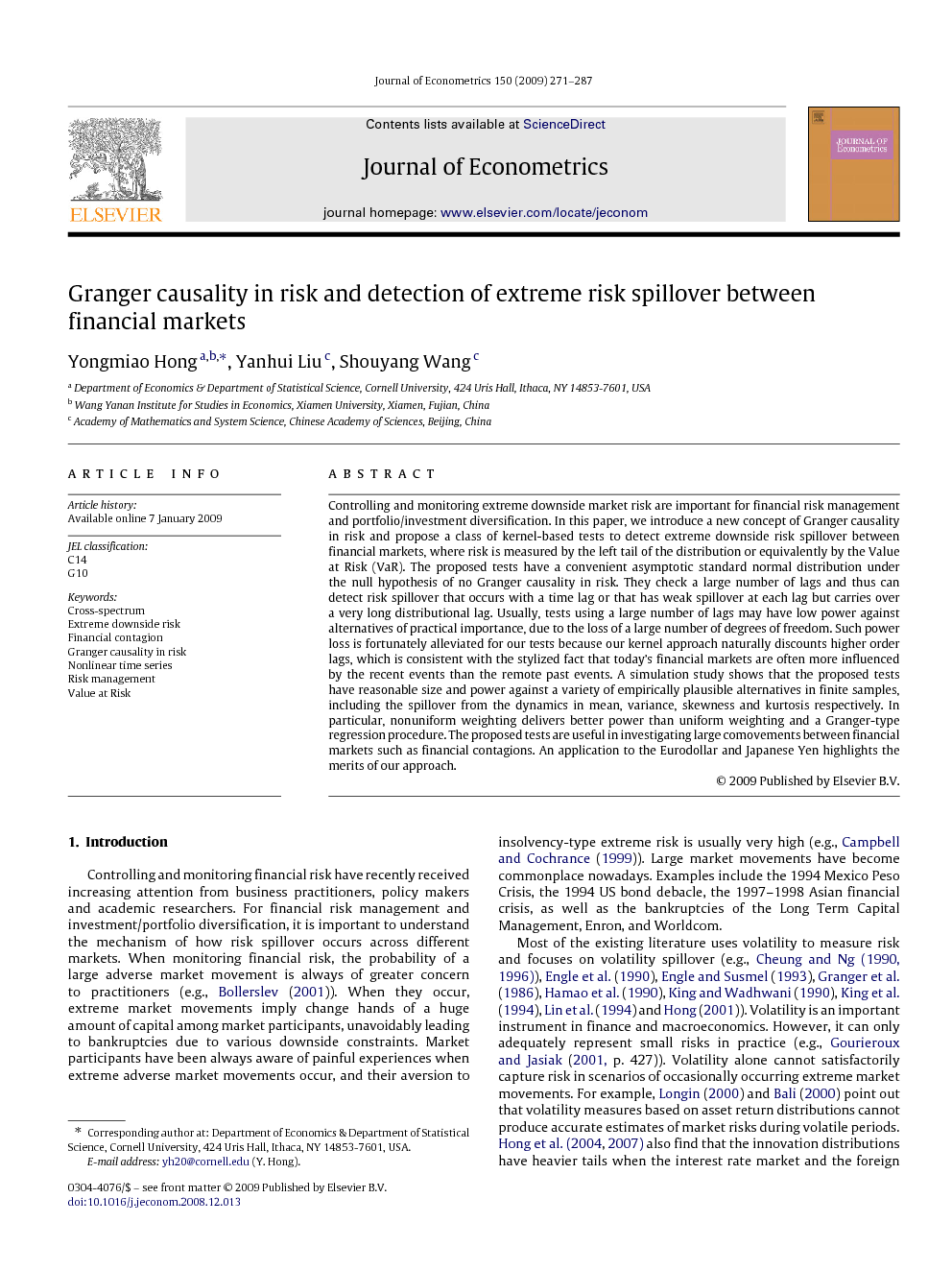 Controlling and monitoring extreme downside market risk are important for financial risk management and portfolio/investment diversification. In this paper, we introduce a new concept of Granger causality in risk and propose a class of kernel-based tests to detect extreme downside risk spillover between financial markets, where risk is measured by the left tail of the distribution or equivalently by the Value at Risk (VaR). The proposed tests have a convenient asymptotic standard normal distribution under the null hypothesis of no Granger causality in risk. They check a large number of lags and thus can detect risk spillover that occurs with a time lag or that has weak spillover at each lag but carries over a very long distributional lag. Usually, tests using a large number of lags may have low power against alternatives of practical importance, due to the loss of a large number of degrees of freedom. Such power loss is fortunately alleviated for our tests because our kernel approach naturally discounts higher order lags, which is consistent with the stylized fact that today’s financial markets are often more influenced by the recent events than the remote past events. A simulation study shows that the proposed tests have reasonable size and power against a variety of empirically plausible alternatives in finite samples, including the spillover from the dynamics in mean, variance, skewness and kurtosis respectively. In particular, nonuniform weighting delivers better power than uniform weighting and a Granger-type regression procedure. The proposed tests are useful in investigating large comovements between financial markets such as financial contagions. An application to the Eurodollar and Japanese Yen highlights the merits of our approach.

Based on a new concept of Granger causality in risk which focuses on the comovements between the tails of the two distributions, a class of kernel-based tests are proposed to test whether a large downside risk in one market will Granger-cause a large downside risk in another market. The proposed tests check a large number of lags but avoid suffering from severe loss of power due to the loss of a large number of degrees of freedom, thanks to the use of a downward weighting kernel function. This downward weighting is consistent with the stylized fact that today’s financial markets are more influenced by more recent events than by remote past events, thus enhancing the power of the proposed tests. This is expected to give good power against the alternatives with decaying cross-correlations as the lag order increases. Indeed, nonuniform weighting often delivers better power than uniform weighting, as is illustrated in a simulation study and an application to exchange rates. A Granger-type regression-based test (1969) is equivalent to the uniform-weighting-based test. Simulation studies show that the procedures have reasonable size and good power against a number of empirically plausible alternatives in finite samples, no matter whether risk spillover arises from spillover in mean, in variance, or in skewness and kurtosis. These procedures are therefore useful for investigating the comovements between large market changes such as financial contagions. We use the new tests to investigate intraday risk spillover causality between Euro/Dollar and Yen/Dollar. It is found that a past large downside movement of Euro Granger-causes a future large price fall of Japanese Yen, and the evidence is stronger for larger changes. On the other hand, only an extremely large past downside movement of Japanese Yen Granger-causes a future large price fall of Euro in risk.