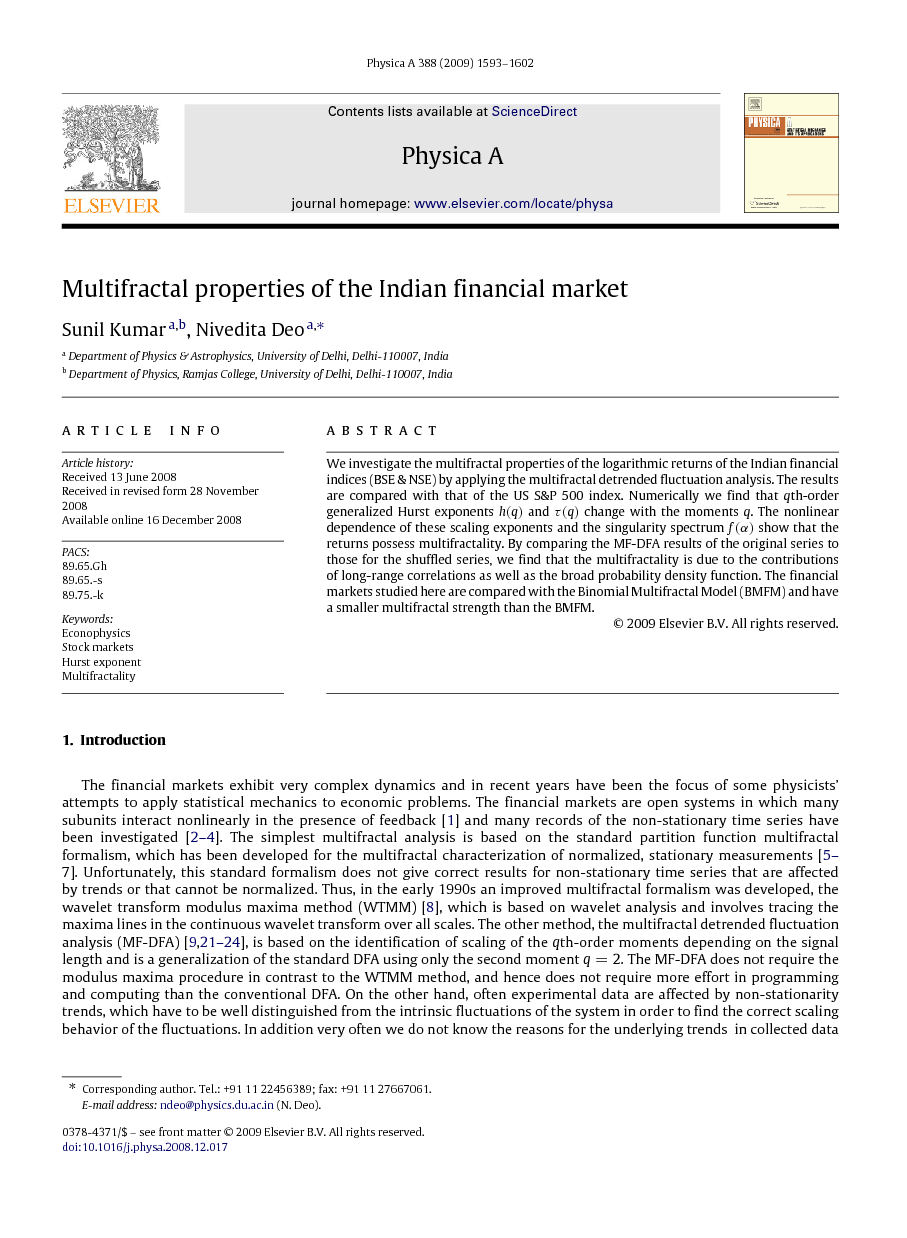 We investigate the multifractal properties of the logarithmic returns of the Indian financial indices (BSE & NSE) by applying the multifractal detrended fluctuation analysis. The results are compared with that of the US S&P 500 index. Numerically we find that qqth-order generalized Hurst exponents h(q)h(q) and τ(q)τ(q) change with the moments qq. The nonlinear dependence of these scaling exponents and the singularity spectrum f(α)f(α) show that the returns possess multifractality. By comparing the MF-DFA results of the original series to those for the shuffled series, we find that the multifractality is due to the contributions of long-range correlations as well as the broad probability density function. The financial markets studied here are compared with the Binomial Multifractal Model (BMFM) and have a smaller multifractal strength than the BMFM.

The financial markets exhibit very complex dynamics and in recent years have been the focus of some physicists’ attempts to apply statistical mechanics to economic problems. The financial markets are open systems in which many subunits interact nonlinearly in the presence of feedback [1] and many records of the non-stationary time series have been investigated [2], [3] and [4]. The simplest multifractal analysis is based on the standard partition function multifractal formalism, which has been developed for the multifractal characterization of normalized, stationary measurements [5], [6] and [7]. Unfortunately, this standard formalism does not give correct results for non-stationary time series that are affected by trends or that cannot be normalized. Thus, in the early 1990s an improved multifractal formalism was developed, the wavelet transform modulus maxima method (WTMM) [8], which is based on wavelet analysis and involves tracing the maxima lines in the continuous wavelet transform over all scales. The other method, the multifractal detrended fluctuation analysis (MF-DFA) [9], [21], [22], [23] and [24], is based on the identification of scaling of the qqth-order moments depending on the signal length and is a generalization of the standard DFA using only the second moment q=2q=2. The MF-DFA does not require the modulus maxima procedure in contrast to the WTMM method, and hence does not require more effort in programming and computing than the conventional DFA. On the other hand, often experimental data are affected by non-stationarity trends, which have to be well distinguished from the intrinsic fluctuations of the system in order to find the correct scaling behavior of the fluctuations. In addition very often we do not know the reasons for the underlying trends in collected data and even worse we do not know the scales of the underlying trends. Usually the available record data is small. For the reliable detection of correlations, it is essential to distinguish trends from the fluctuations intrinsic in the data. Hurst’s rescaled-range analysis [10] and other non-detrending methods work well if the records are long and do not involve trends. But if trends are present in the data, they might give wrong results. Detrended fluctuation analysis (DFA) is a well-established method for determining the scaling behavior of noisy data in the presence of trends without knowing their origin and shape [11], [12], [13], [14] and [15]. By comparing the multifractal-DFA results for the original time series with those of the shuffled time series one can distinguish two different kinds of multifractality: (i) Multifractality due to a broad probability density function for the values of the time series, this multifractality cannot be removed by shuffling the series. (ii) Multifractality due to different long-range correlations for small and large fluctuations, here the corresponding shuffled series will exhibit non-multifractal scaling, since all long-range correlations are destroyed by the shuffling procedure. If both kinds of multifractality are present in a given time series than the shuffled series will show weaker multifractality than the original one [9]. The Hurst exponent, proposed by Hurst [10] provides a measure for long-term memory and fractality of a time-series. Since it is robust with few assumptions about the underlying system, it has broad applicability for time-series analysis and gives information about the stochastic phenomena behind the fluctuations present in the series. H=0.5H=0.5 indicates a random series, H>0.5H>0.5 and H<0.5H<0.5 corresponds to persistent and anti-persistent series respectively. This paper is organized as follows: Section 2, describes the MF-DFA procedure. In Section 3, we apply the MF-DFA method to the financial markets (BSE, NSE, S&P 500 indices) and study the multifractal properties and long-range correlations present in the financial time series. The series generated from the BMFM is compared with the BSE, NSE and S&P 500 indices. Finally we conclude in Section 4.