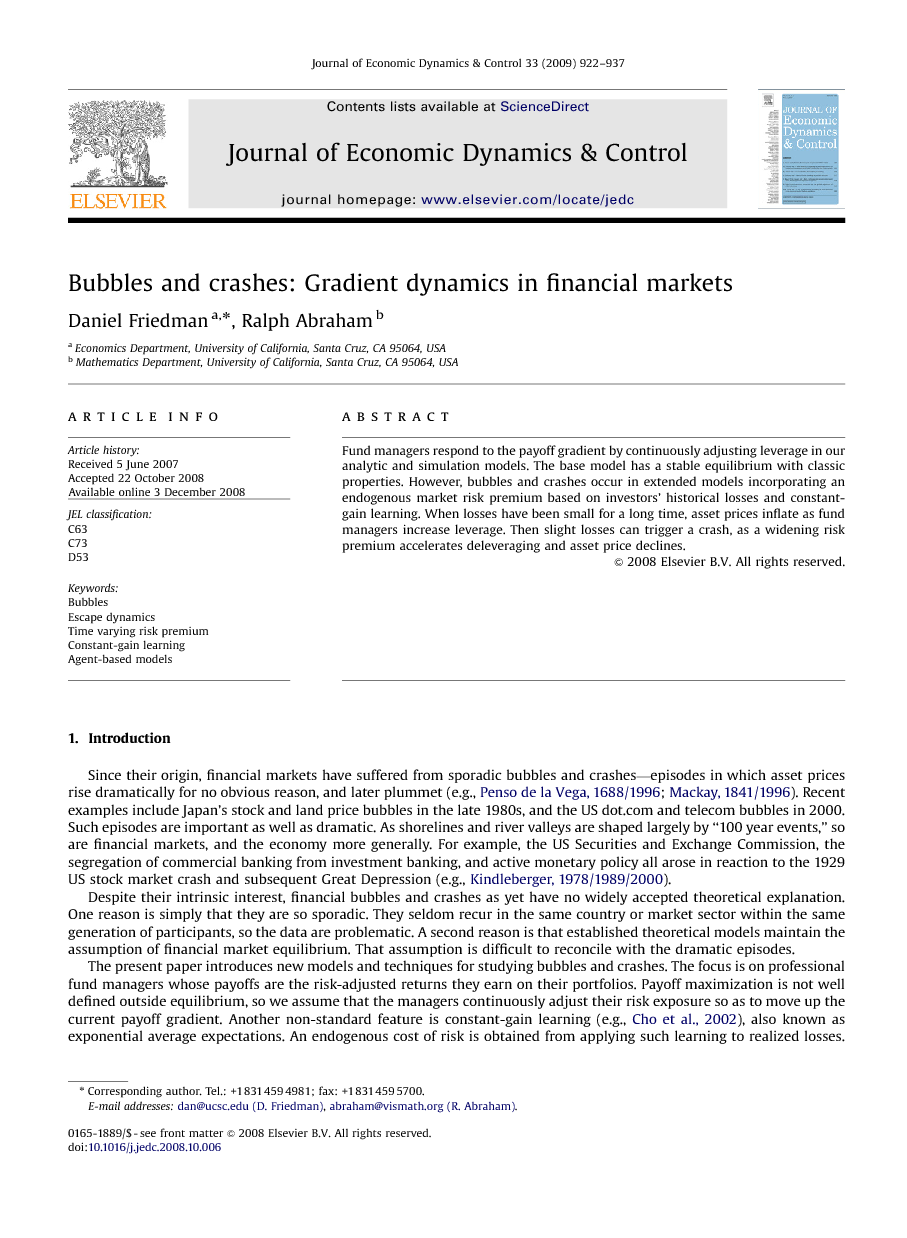 Fund managers respond to the payoff gradient by continuously adjusting leverage in our analytic and simulation models. The base model has a stable equilibrium with classic properties. However, bubbles and crashes occur in extended models incorporating an endogenous market risk premium based on investors’ historical losses and constant-gain learning. When losses have been small for a long time, asset prices inflate as fund managers increase leverage. Then slight losses can trigger a crash, as a widening risk premium accelerates deleveraging and asset price declines.

Since their origin, financial markets have suffered from sporadic bubbles and crashes—episodes in which asset prices rise dramatically for no obvious reason, and later plummet (e.g., Penso de la Vega, 1688/1996; Mackay, 1841/1996). Recent examples include Japan's stock and land price bubbles in the late 1980s, and the US dot.com and telecom bubbles in 2000. Such episodes are important as well as dramatic. As shorelines and river valleys are shaped largely by “100 year events,” so are financial markets, and the economy more generally. For example, the US Securities and Exchange Commission, the segregation of commercial banking from investment banking, and active monetary policy all arose in reaction to the 1929 US stock market crash and subsequent Great Depression (e.g., Kindleberger, 1978/1989/2000). Despite their intrinsic interest, financial bubbles and crashes as yet have no widely accepted theoretical explanation. One reason is simply that they are so sporadic. They seldom recur in the same country or market sector within the same generation of participants, so the data are problematic. A second reason is that established theoretical models maintain the assumption of financial market equilibrium. That assumption is difficult to reconcile with the dramatic episodes. The present paper introduces new models and techniques for studying bubbles and crashes. The focus is on professional fund managers whose payoffs are the risk-adjusted returns they earn on their portfolios. Payoff maximization is not well defined outside equilibrium, so we assume that the managers continuously adjust their risk exposure so as to move up the current payoff gradient. Another non-standard feature is constant-gain learning (e.g., Cho et al., 2002), also known as exponential average expectations. An endogenous cost of risk is obtained from applying such learning to realized losses. Where possible, our models adapt and streamline standard ingredients. For example, we assume a single source of systematic risk, ignore inflation and taxes, and blur the distinctions between cash flow, earnings and dividends. Section 2 spotlights some relevant stands of literature. Our models draw inspiration from one of the older strands, due to Keynes, Minksy and Kindleberger (KMK), and also from newer stands, especially the emerging agent-based approach. Section 3 presents the basic model, beginning with the static ingredients and gradient dynamics. We characterize analytically a unique symmetric equilibrium and its comparative statics in the simplest version of the model. An agent-based simulation model illustrates and extends these results. The simulations converge reliably and smoothly to the equilibrium over a very wide range of parameter configurations. Bubbles and crashes first appear in Section 4. It presents an extension incorporating some KMK-inspired features such as mean-reverting, manager-specific luck (or perhaps skill); investors who are constant-gain learners; and an endogenous risk cost. Analytic approximations suggest typical behavior and lead to conjectures about bubbles and crashes. Simulations confirm such episodes for a wide range of parameter configurations. The intuition is that when losses have been small for a long time, asset prices inflate as fund managers adopt riskier portfolios. When losses occur, as they eventually must, the more exposed managers get hit harder and sell faster. This puts downward pressure on asset prices, and an increasing risk premium accelerates the decline in asset price. This vicious cycle can drive asset price below fundamental value. Bubbles and crashes are more prevalent in simulations when manager-specific luck is more volatile and longer-lived, when investors have shorter memories, when the economy grows faster and the discount rate is lower, and when current asset prices are higher. Section 5 summarizes the results and suggests avenues for future research. Appendix A collects mathematical proofs, Appendix B describes extensions of the model, and Appendix C presents the KMK perspective. Additional material, including source and executable code for the simulations, can be found at http://www.vismath.org/research/landscapedyn/models/markets.

We use simulations, supplemented by some analytics and statistics, to explore a perspective on financial market bubbles and crashes originating in the writings of Keynes, Minsky and Kindleberger (KMK). We begin with Model 0, a base model featuring a gradient process by which fund managers adjust the riskiness of their portfolios. Model 0 is very stable. Analytic results suggest, and simulations confirm for a wide range of exogenous parameters, that the asset price converges quickly and reliably to a level proportional to the fundamental value. The proportion is a decreasing function of the risk cost parameter c2c2. The model never bubbles or crashes. Model 1, an extension of Model 0, features an endogenous risk premium driven by constant-gain learning. It also has a unique steady state, but its dynamics are quite different. Although asset price usually is near its steady state value, there are recurrent episodes in which it rises substantially (typically 20–50% above normal levels) and then crashes (often to a third or less of normal levels within a few months). Such episodes occur over a wide range of “realistic” parameter values. The episodes become rarer when parameter configurations give investors longer memories or give fund managers smaller (or more fleeting) streaks of luck. In opposite configurations the episodes become more common and, with extreme parameter values, normalcy becomes rare. The occasional bubble and crash episodes seem related to escape dynamics, which identifies the “particular most likely way” in which the economy temporarily leaves the vicinity of a steady state (Williams, 2004, p. 7). However, Model 1 lacks the linear structure and explicit belief formation of the macrotheory literature, and its continuous action space puts it outside the evolutionary game theory literature cited in Section 2.2. It seems that new efforts, well beyond the scope of the present paper, are needed for analytic characterization of Model 1 dynamics. Model 1 seems to vindicate the KMK perspective. It seems clear that bubbles and crashes would only be intensified by incorporating other realistic features emphasized by KMK, such as the heterogeneous expectations, rank-sensitive managers, and exogenous shifts in economy-wide growth opportunities. Much work remains. One can extend Model 1 to incorporate such realistic features and, as noted in Appendix B, we have already included many of them in a Model 2. Preliminary results for Model 2 are encouraging but followup work is required. Also, other realistic features await exploration. The most important task, however, is cross-validation. Simulation models are most valuable when they work in tandem with analytic results, empirical studies and/or experiments with human subjects. We hope that our work inspires new analytical, empirical and experimental work that deepens understanding of bubbles and crashes.