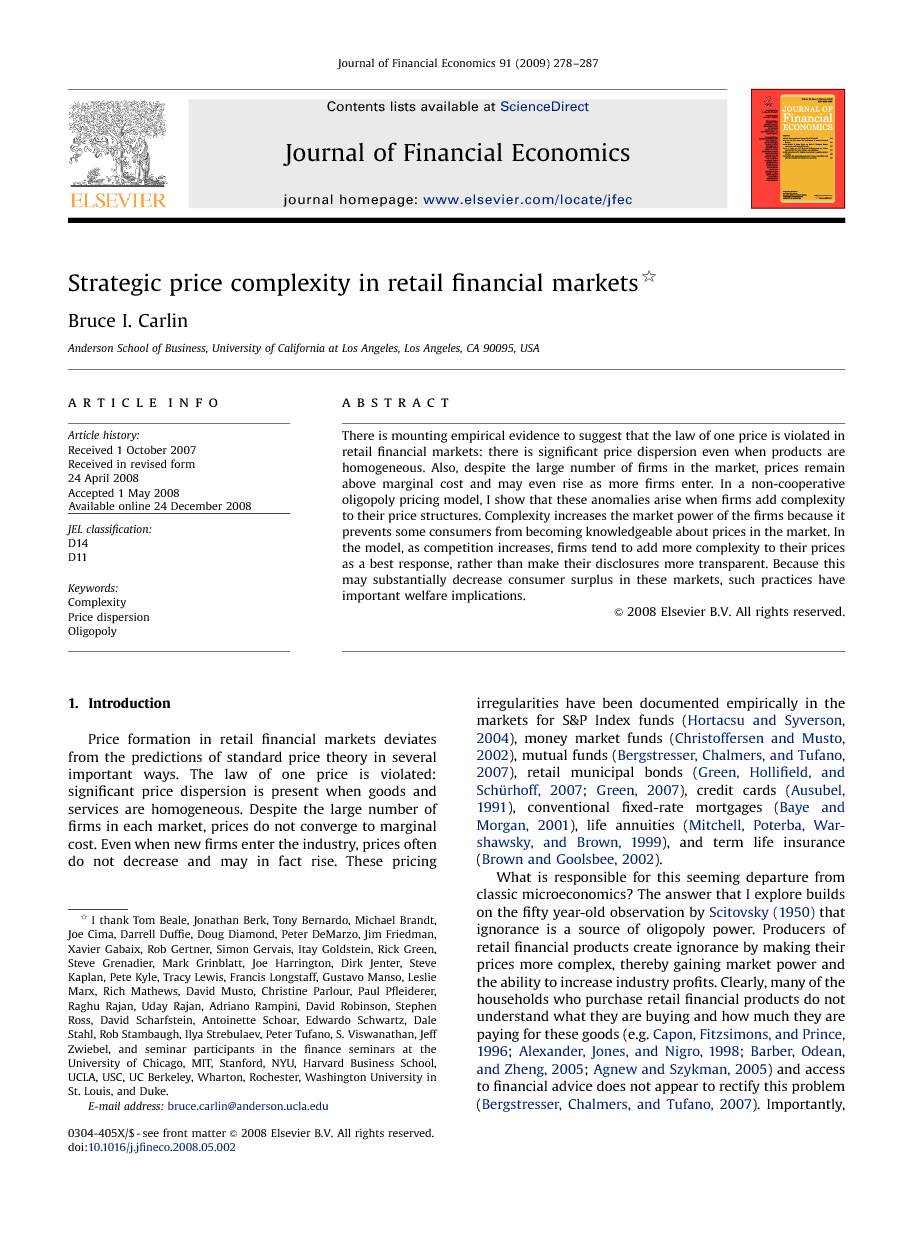 There is mounting empirical evidence to suggest that the law of one price is violated in retail financial markets: there is significant price dispersion even when products are homogeneous. Also, despite the large number of firms in the market, prices remain above marginal cost and may even rise as more firms enter. In a non-cooperative oligopoly pricing model, I show that these anomalies arise when firms add complexity to their price structures. Complexity increases the market power of the firms because it prevents some consumers from becoming knowledgeable about prices in the market. In the model, as competition increases, firms tend to add more complexity to their prices as a best response, rather than make their disclosures more transparent. Because this may substantially decrease consumer surplus in these markets, such practices have important welfare implications.

Purchasing a retail financial product requires effort. Because prices in the market are complex, consumers must pay a cost (time or money) to compare prices in the market. Some consumers gain sufficient expertise and get the best deal. Those with high search costs forego value, and often make purchases without knowing exactly what they are getting or how much they are paying. In fact, they may also be unaware that they are indeed over-paying (Choi, Laibson, and Madrian, 2006). There is now a large literature that documents these findings (e.g., Capon, Fitzsimons, and Prince, 1996; Alexander, Jones, and Nigro, 1998; Barber, Odean, and Zheng, 2005; Agnew and Szykman, 2005) and this phenomenon may have substantial welfare implications (Campbell, 2006; Calvet, Campbell, and Sodini, 2007). In this paper, I develop a model of pricing complexity in which firms compete on price for market share and strategically add complexity to preserve market power in the face of competitive pressures. The resulting equilibrium matches empirical observation: price dispersion persists even when goods are homogeneous and prices do not converge to marginal cost despite a large number of firms. The analysis in the paper has important social implications, given the large size of retail financial markets. The paper also adds to an extensive literature on consumer search (e.g., Diamond, 1971, Salop and Stiglitz, 1977, Weitzman, 1979, Varian, 1980, Carlson and McAfee, 1983 and Stahl, 1989). Whereas the search environment is constructed exogenously in most models in this literature, I consider a setting in which the firms can alter the quality of information transmission within the market, and affect the ability of consumers to become knowledgeable about their purchases. The results that I derive capture several stylized features of retail financial markets, as well as markets in which other homogeneous products are sold (e.g., books). Therefore, the paper is of general economic interest as well. I believe that this paper presents a plausible argument for considering complexity as an important determinant of price formation in retail financial markets. Given the large number of potential extensions of this analysis, this paper hopefully represents an important step toward greater understanding of the effect of complexity on security design, asset prices, and market structure.