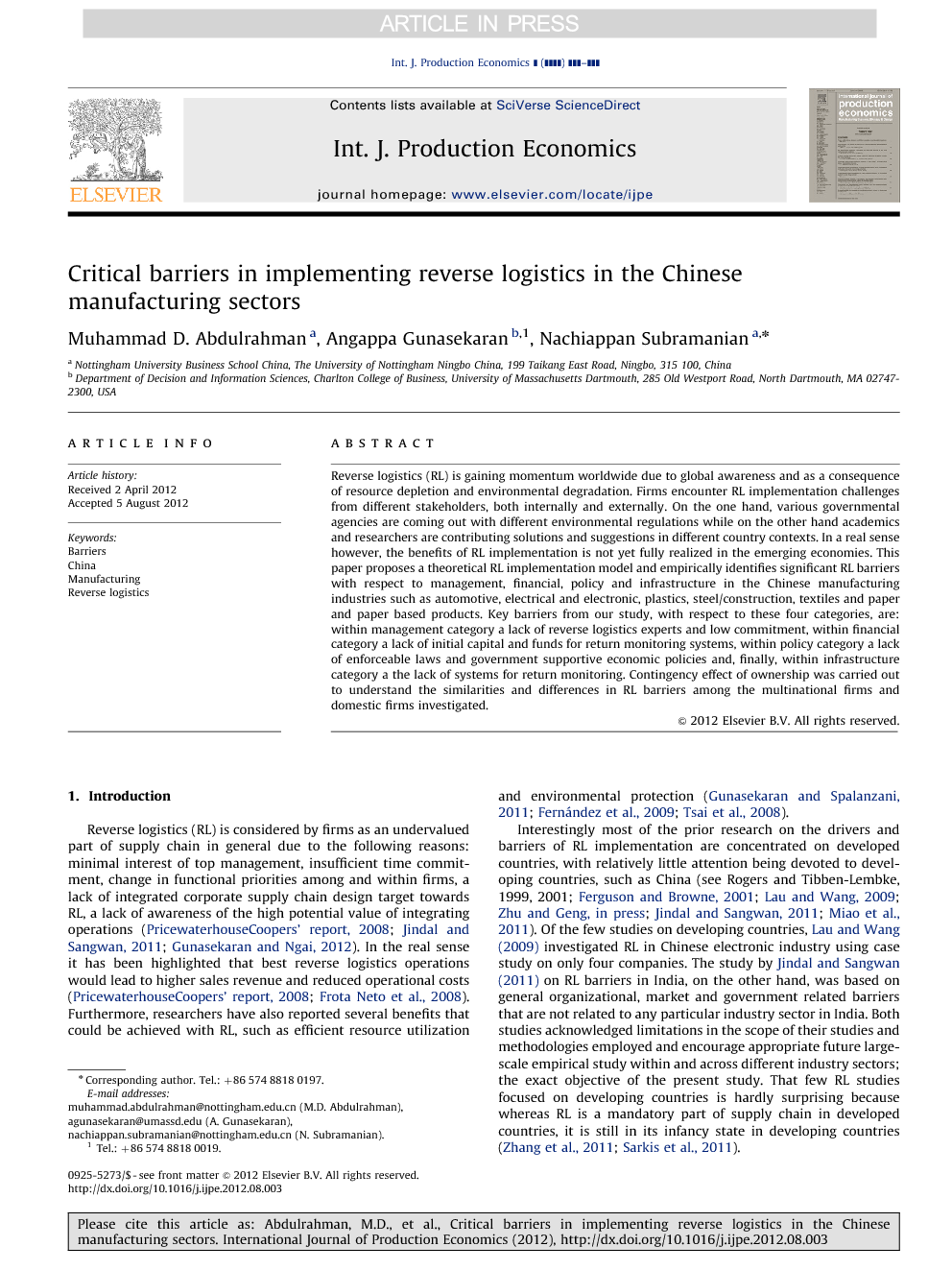 Reverse logistics (RL) is gaining momentum worldwide due to global awareness and as a consequence of resource depletion and environmental degradation. Firms encounter RL implementation challenges from different stakeholders, both internally and externally. On the one hand, various governmental agencies are coming out with different environmental regulations while on the other hand academics and researchers are contributing solutions and suggestions in different country contexts. In a real sense however, the benefits of RL implementation is not yet fully realized in the emerging economies. This paper proposes a theoretical RL implementation model and empirically identifies significant RL barriers with respect to management, financial, policy and infrastructure in the Chinese manufacturing industries such as automotive, electrical and electronic, plastics, steel/construction, textiles and paper and paper based products. Key barriers from our study, with respect to these four categories, are: within management category a lack of reverse logistics experts and low commitment, within financial category a lack of initial capital and funds for return monitoring systems, within policy category a lack of enforceable laws and government supportive economic policies and, finally, within infrastructure category a the lack of systems for return monitoring. Contingency effect of ownership was carried out to understand the similarities and differences in RL barriers among the multinational firms and domestic firms investigated.

Reverse logistics (RL) is considered by firms as an undervalued part of supply chain in general due to the following reasons: minimal interest of top management, insufficient time commitment, change in functional priorities among and within firms, a lack of integrated corporate supply chain design target towards RL, a lack of awareness of the high potential value of integrating operations (PricewaterhouseCoopers’ report, 2008, Jindal and Sangwan, 2011 and Gunasekaran and Ngai, 2012). In the real sense it has been highlighted that best reverse logistics operations would lead to higher sales revenue and reduced operational costs (PricewaterhouseCoopers’ report, 2008 and Frota Neto et al., 2008). Furthermore, researchers have also reported several benefits that could be achieved with RL, such as efficient resource utilization and environmental protection (Gunasekaran and Spalanzani, 2011, Fernández et al., 2009 and Tsai et al., 2008). Interestingly most of the prior research on the drivers and barriers of RL implementation are concentrated on developed countries, with relatively little attention being devoted to developing countries, such as China (see Rogers and Tibben-Lembke, 1999, 2001; Ferguson and Browne, 2001 and Lau and Wang, 2009; Zhu and Geng, in press; Jindal and Sangwan, 2011 and Miao et al., 2011). Of the few studies on developing countries, Lau and Wang (2009) investigated RL in Chinese electronic industry using case study on only four companies. The study by Jindal and Sangwan (2011) on RL barriers in India, on the other hand, was based on general organizational, market and government related barriers that are not related to any particular industry sector in India. Both studies acknowledged limitations in the scope of their studies and methodologies employed and encourage appropriate future large-scale empirical study within and across different industry sectors; the exact objective of the present study. That few RL studies focused on developing countries is hardly surprising because whereas RL is a mandatory part of supply chain in developed countries, it is still in its infancy state in developing countries (Zhang et al., 2011 and Sarkis et al., 2011). The on-going rapid industrialization and presence of 22% of the world population in China has led to enormous production and consumption in the Chinese economy. The downside of this unprecedented economic growth has been extremely high resource consumption and serious environmental pollution, such as contaminated water and solid waste per unit of GDP, which is much higher than in developed countries (Fang et al., 2007). The waste generated in different sectors of China’s economy can be comprehended by the statistics reported by Ma (2004) which point to 5 million tons of waste steel, 200,000 t of non-ferrous metal, 14 million tons of waste paper, a large amount of waste plastics and glass which have been never recycled. Furthermore, China occupies the second position in the world, after the USA, in landfilling and incineration of e-waste residues (Zoeteman et al., 2009). This motivated us to look into the issues related to RL implementation, specifically to identify the key barriers in different Chinese manufacturing sectors. Few studies have been carried out to understand RL implementation in general in the Chinese context but most of them are related to the e-waste sector. To the best of our knowledge they have used case study in particular as a method to study the issues, which has limitations such as small sample size which restricts the generalization of findings to reflect the circumstance of the whole population (Merriam, 1985). The major intention of this study is to empirically understand various RL implementation barriers from manufacturing firms' perspective in different Chinese manufacturing sectors. RL barriers can be categorized into four major factors and they are internal and external to firms. The internal barriers are management, financial and infrastructure while policy is considered as an external barrier to a firm. Beyond this contingency analysis on the effect of ownership is carried out to understand the similarities and differences in barriers among multinational firms and Local (domestic) firms operating in China. The rest of the paper is organized as follows: Background for the research is highlighted in Section 2. A theoretical model for RL implementation is discussed in Section 3. Methodology adopted to empirically study the implementation barrier is detailed in Section 4. The outcome of the study is reported in Section 5. The managerial implications are narrated in Section 6. Finally the paper concludes with a summary and outlines future scope of research.

Reverse logistics is gaining momentum worldwide due to rising costs of materials, resources scarcity, global awareness and consequences of climate change. Proactive manufacturing companies often implement RL practices such as recycling, reuse and general waste management strategies developed to gain competitive advantage while meeting increasing local and international demands for environmental protection. In the light of increasing resource scarcity, global take-back of EoL products legislations and consequences of climate change, it is imperative that China – the global factory – is part of the global manufacturing sustainability efforts. Yet, limited empirical evidence on RL practices in Chinese manufacturing context provides little clue on the level of RL implementation and the sustainability of RL in the Chinese manufacturing sector. Based on empirical study of Chinese manufacturing companies located in five major coastal cities with the most advanced logistics infrastructures in China, we identified reverse logistics implementation barriers with respect to management, financial, policy and infrastructure in six of China’s key manufacturing industries: automotive, electronic/computer, plastics, steel/construction, textiles and paper and paper based industries. Our study findings indicate that, at both industry and ownership levels, the lack of financial resources, such as lack of initial capital and lack of funds for returns monitoring systems, constitute major financial obstacles to RL implementation in the whole of Chinese manufacturing industry. Low commitment and lack of RL experts at business management levels constituted major management barriers to RL implementation in Chinese manufacturing. While China may be enacting several environmental laws similar to those in developed world, the Chinese central government is in reality soft-pedaling on the imposition of such stringent environmental legislations for the fear that it might overly restrain economic growth and competitiveness, or even threaten the survival of the majority of the country’s manufacturing firms that are largely SMEs (Lau and Wang, 2009). This has impeded the implementation of RL in China’s manufacturing industry. We found the lack of enforceable legislation on take-back of EoL products and lack of economic incentives from government as the biggest policy barriers to RL implementation and practice in the Chinese manufacturing sector. As revealed by this study, a set of comprehensive and concerted efforts are required from both manufacturing sectors and the government to remove some of the external barriers identified in this study because of their close linkages. For example, external barriers such the lack of enforceable legislations on the take-back of EoL products and the lack of economic incentives from the government, reduce motivation and initiative to invest in RL training infrastructure and technology by companies. This supports the argument that there are linkages between external RL implementation factors (Lau and Wang, 2009). It appears that recent efforts at various levels by the Chinese government at creating environmental awareness in the Chinese public is gaining ground, This is because, despite being well reported in literature, a lack of public awareness of environmental protection was not indicated as a major barrier to the companies in this study. Similarly, customers not being informed of take-back channel for EoL products were not reported as a significant barrier in any of the industries investigated. Some limitations that could be addressed in future are: further examination of each industry of the manufacturing sectors to understand in detail RL implementation barrier specific to each industry. In future, valuable insights could be gained through studying the moderating effects of firm size, efficiency and performance on RL implementation with various hypotheses in each sector for deeper understanding.