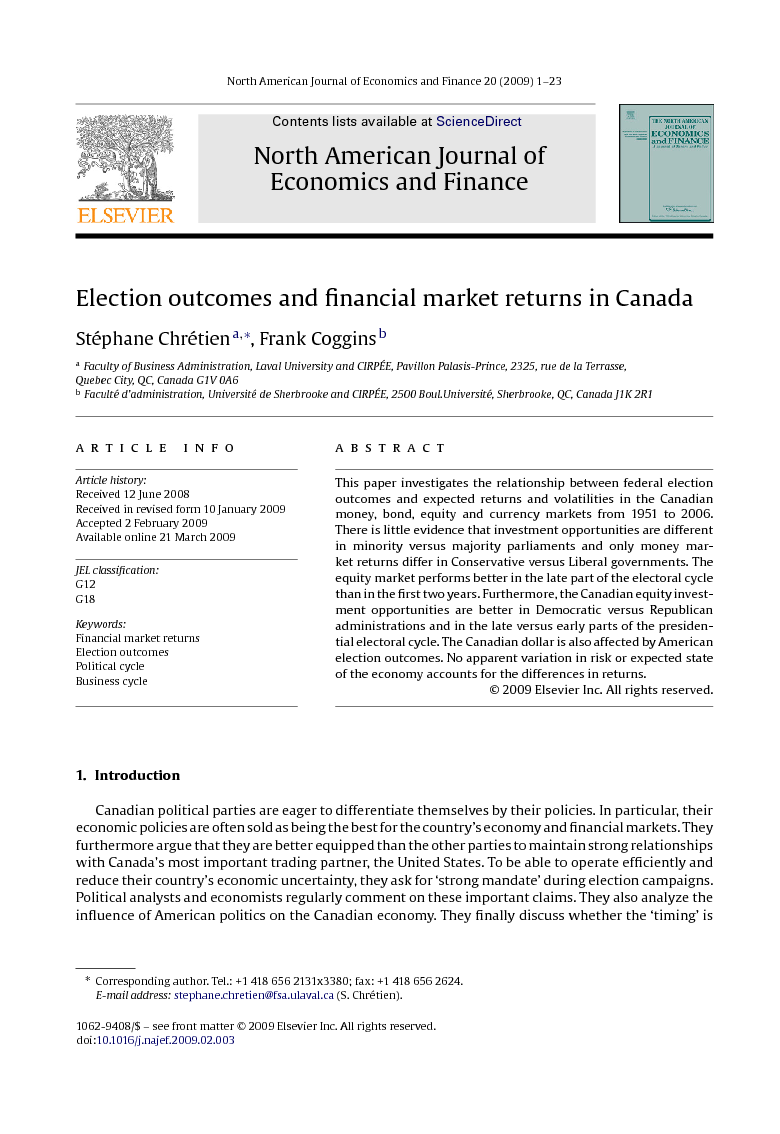 This paper investigates the relationship between federal election outcomes and expected returns and volatilities in the Canadian money, bond, equity and currency markets from 1951 to 2006. There is little evidence that investment opportunities are different in minority versus majority parliaments and only money market returns differ in Conservative versus Liberal governments. The equity market performs better in the late part of the electoral cycle than in the first two years. Furthermore, the Canadian equity investment opportunities are better in Democratic versus Republican administrations and in the late versus early parts of the presidential electoral cycle. The Canadian dollar is also affected by American election outcomes. No apparent variation in risk or expected state of the economy accounts for the differences in returns.

Federal elections in Canada and their related campaigns attract tremendous attention from citizens. Political parties spend large sums of money to get the message across that they should be allowed to form the next government because their policies are the most appropriate for the country. Once election results are known, there is continued interest (and media coverage) on whether the government has the strength needed to lead the country and is able to deliver on its promises. Ultimately, election outcomes can thus have wide-ranging implications for the country's future economic and social conditions. As financial markets generally reflect changing conditions rapidly, they represent a natural experiment to observe the effects of election outcomes. This article examines the historical relationship between federal election outcomes and Canadian financial markets returns from 1951 until 2006 by asking four questions. First, are financial market returns different between majority and minority governments? We find no significant difference in means and standard deviations for money, bond, equity and currency market returns. Second, are financial market returns different between right-leaning Conservative and left-leaning Liberal governments? Except for the average inflation and real risk-free rate, we again discover no significant difference. Third, are financial market returns different between the early part and the late part of the variable-term federal mandates? We find that the equity market yields significantly higher average returns in the last part of the federal mandate than in its first two years, consistent with the hypothesis of opportunistic election calling that could include policy timing. Fourth, are financial market returns influenced by American election outcomes? We show that the equity market performs better in Democratic versus Republican administrations and in the late versus early parts of the presidential electoral cycle, an apparent spill over effect of American election outcomes into the Canadian financial markets. The currency market is also affected by the American electoral results. We furthermore show that the stock market performs the worst when the Canadian and American governments are simultaneously in the early part of their mandates, and much better otherwise. However, having ideologically aligned leaderships in Canada and the United States does not lead to a difference in investment opportunities. All differences in mean returns are not accounted for by expected state of the economy control variables, are not associated with corresponding increases in standard deviations and are robust to small sample and spurious regression biases. Our findings thus document some stylized facts on the relation between election outcomes and financial market returns in Canada. Our investigation is principally motivated by claims on these issues anecdotally offered by politicians and political commentators, as well as by a growing empirical literature on the subject in the United States. While we discuss some possible hypotheses for our results, we leave open numerous issues for future research. For example, we do not know the mechanism through which political variables impact financial market returns. Tracing the effect of economic policies on returns would necessitate data to measure shocks to fiscal, monetary and regulatory policies that are unexpected by market participants, a significant undertaking. The policy timing hypothesis in the spirit of Tufte (1978) would then imply more stimulating shocks in the late part of the mandates. Another fundamental question is whether political variables cause fluctuations in returns or whether it is the other way around. This article has implicitly assumed that election outcomes are exogenous events, an assumption that is given some support by our findings that election outcomes do not proxy for the expected state of the economy. However, economic variables might be helpful in predicting election outcomes. Endogenizing the political cycle is a complicated problem that deserves further attention. Future work on these issues would be welcomed from both a theoretical and empirical perspectives.